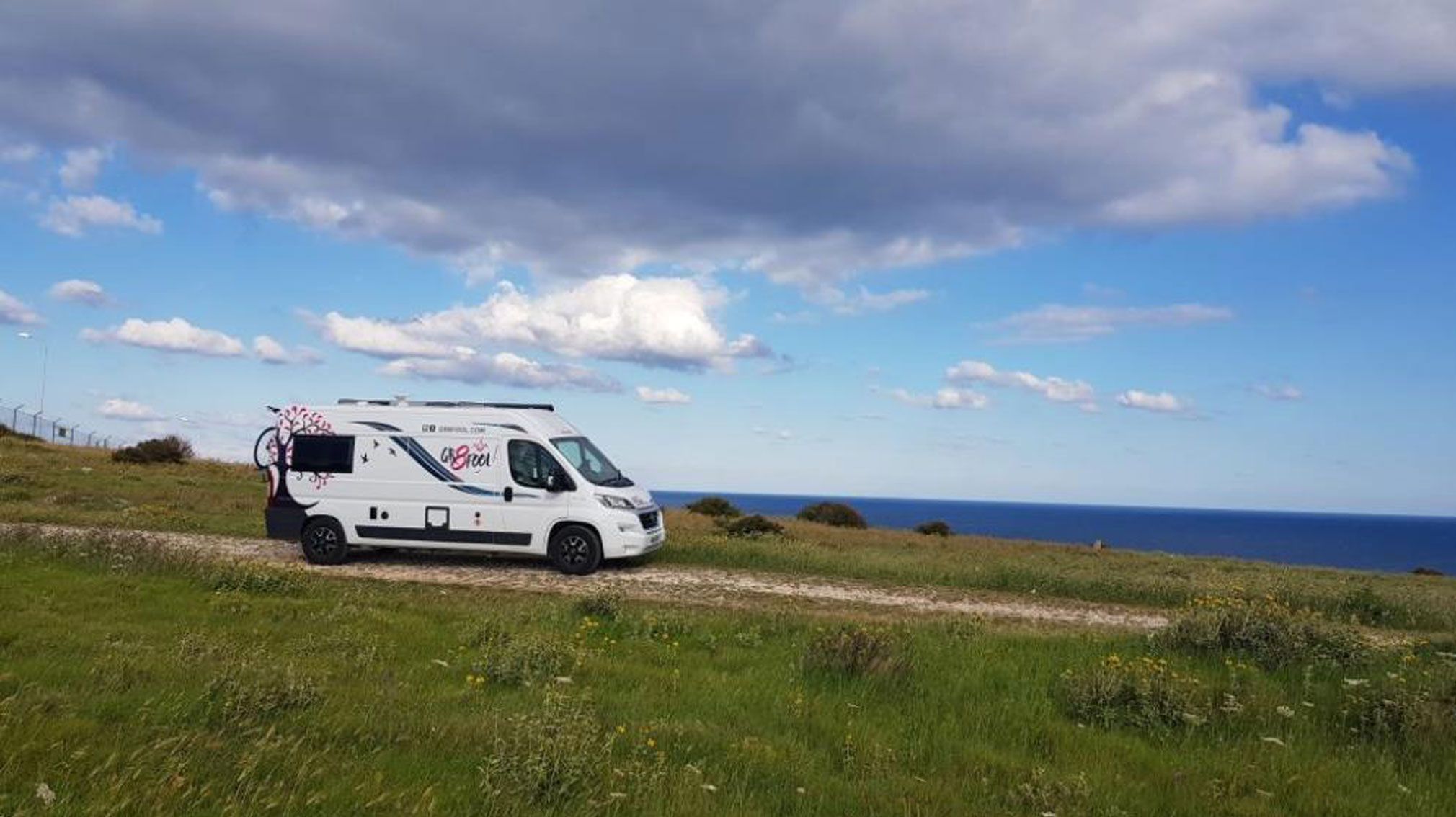 Final vanlife destination of my c. 4 months in Italy? Puglia. The heel of the forever-fashionable Italian boot!

I expected to start enjoying some “beach-life” on my last week in Italy, but this year the month of May showed-up with crazy weather (colder and wetter than usual), pretty much across Europe, including in Puglia.

No matter the weather, I still enjoyed my vanlife tour and I had a few hours of sunshine here and there; enough to get a glimpse of most places in their true gorgeous colours.

I had just over a week to visit Puglia, if I wanted to make it across the Adriatic Sea and to the other side of Greece in time to meet friends holidaying in the island of Skopelos.  I decided to concentrate mostly on the Southern part, in the Salento area, and I managed to fit many beautiful spot in a short time, by moving on regularly every day or two.

HOW I PICK MY STOPS

My destinations are mostly picked out of recommendations or intuition. I then tend to choose my campsites or night-stays using google maps, which often works better than some popular camping apps. I rarely book ahead but I do some research in advance, so that I know more or less what my options are.

Italy is a stunning country that offers so much to see (almost too much!), but it is not as well prepared for campers as other countries I’ve experienced so far in Europe.  If you’re travelling all-year-round or off season (more or less from mid/end September to mid/end of May), there are very few open places and you mostly end up staying in “Area Sosta Camper”.  Essentially parking with Camper facilities.  Some are very basic, others can be quite nice for a couple of nights.

In Puglia, the season 2019 was scheduled to start even later than I expected, just after I’d leave.

My first stop was in the Region’s capital of Bari.  I stayed at a carwash carpark that offers two camper spots, with electric hook-up and a basic toilet/shower cubicle.  The perks of this place?  The owner is really kind and thoughtful, the location is the most central you can find, walking distance to the beach and town, and of course you can treat your motorhome to a nice “scrub and wash” right on your door step. 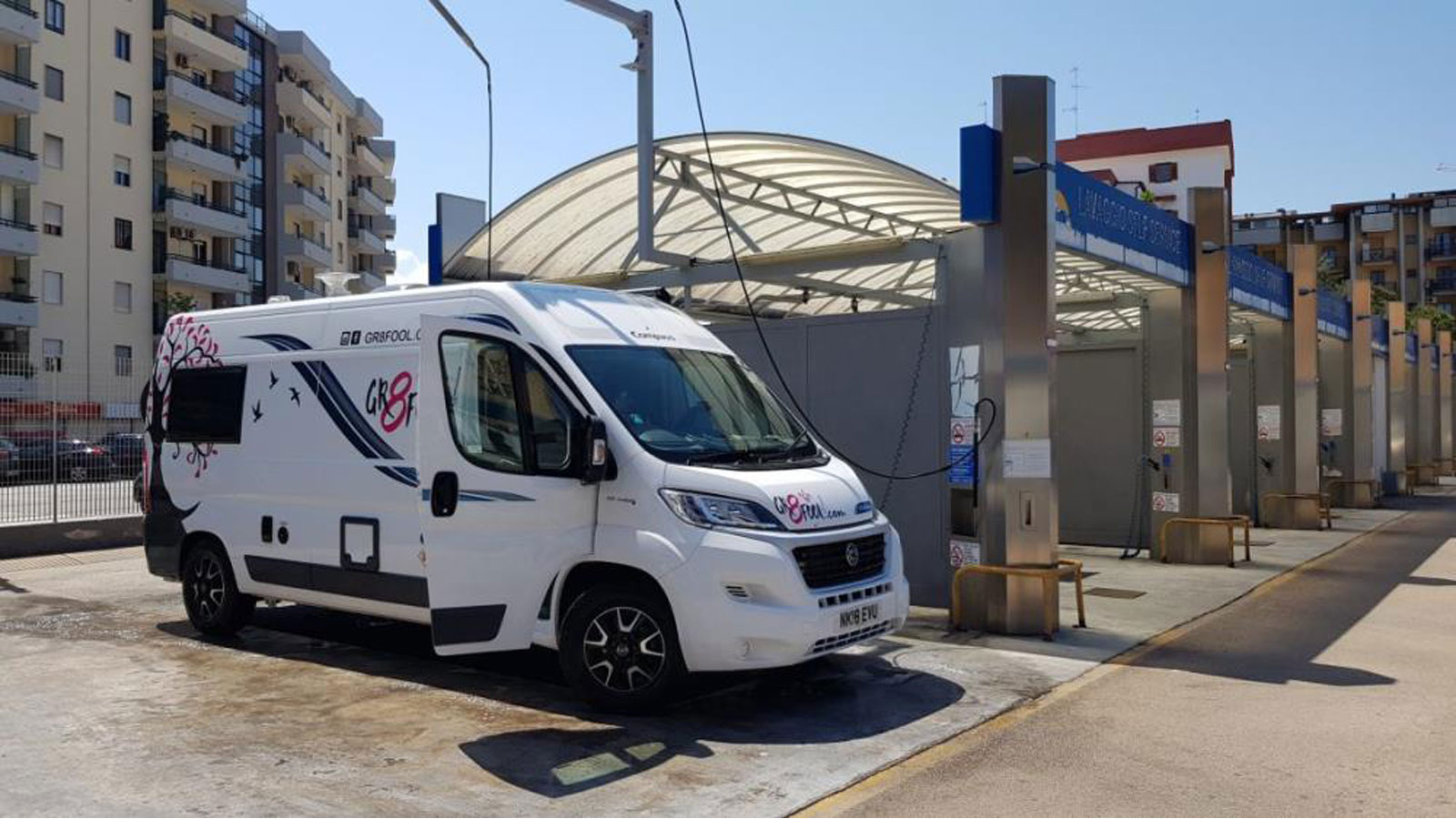 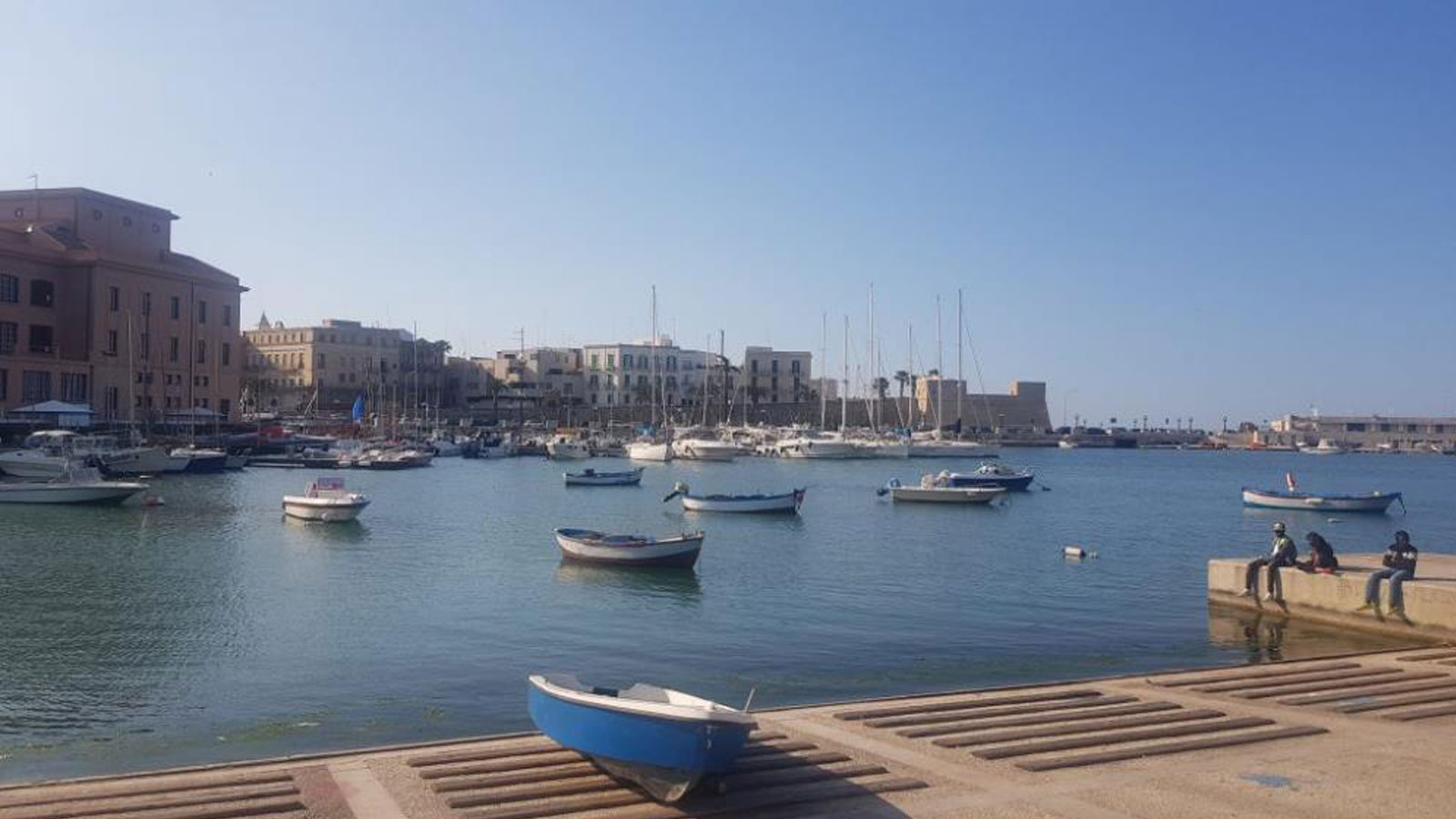 After a lovely walk along the coast, I wandered around the old town and found myself trying the “famous Sgagliozze da Maria”, a local speciality that is basically fried polenta. Simple and tasty! I then spotted some ladies making fresh orecchiette pasta and bought a big bag that was really too much for me… 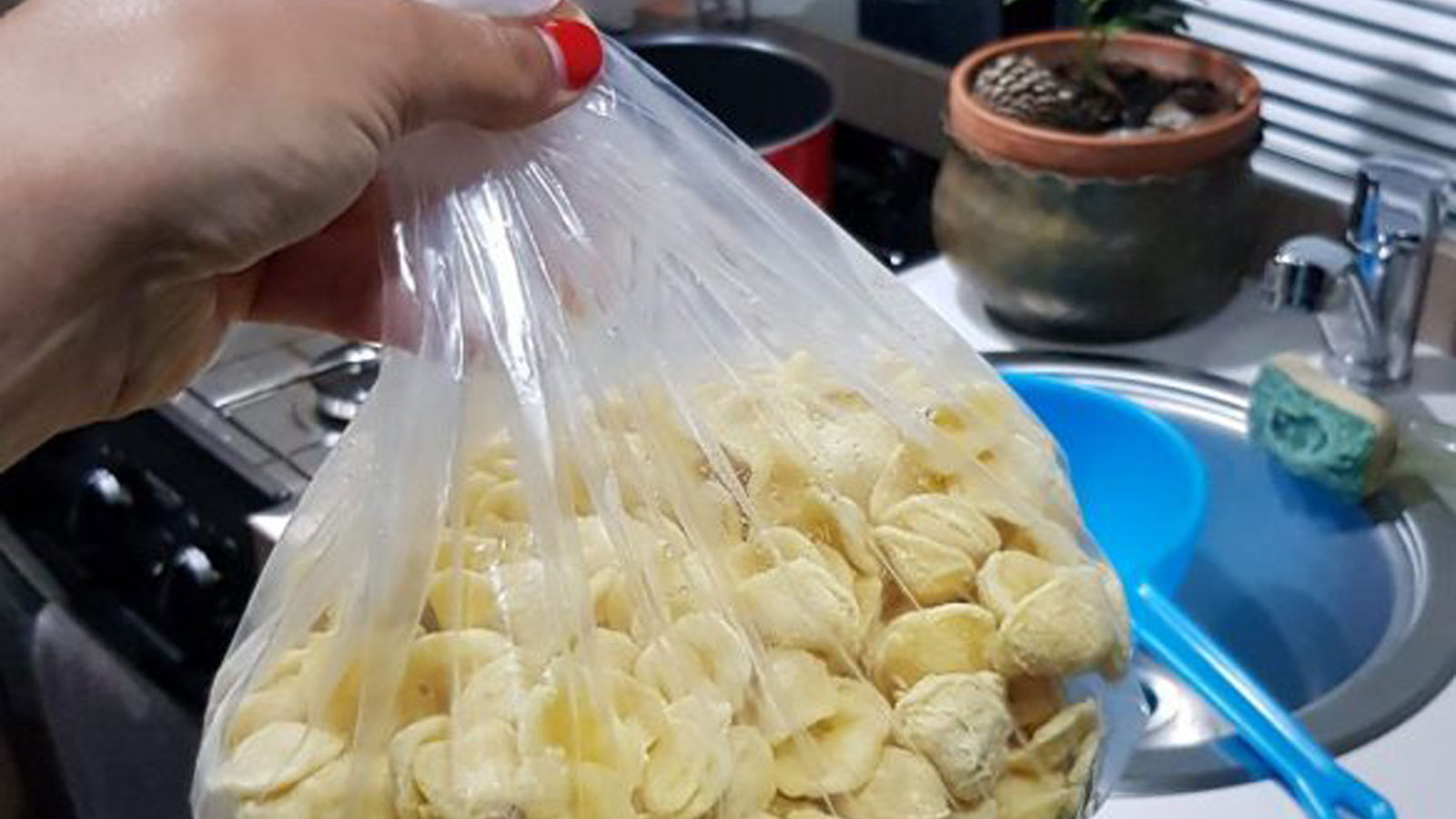 Getting lost in Alberobello

You can’t do Puglia without visiting the Trulli of Alberobello.  I stayed in a campsite only a short walk from this pretty UNESCO heritage site but somehow I managed to get lost and my 20min walk turned into 1 hour!  Worth it though. The Trulli scattered around the countryside kept me happy and so did the sun which came out just in time to brighten up this fairy-tale-like village. 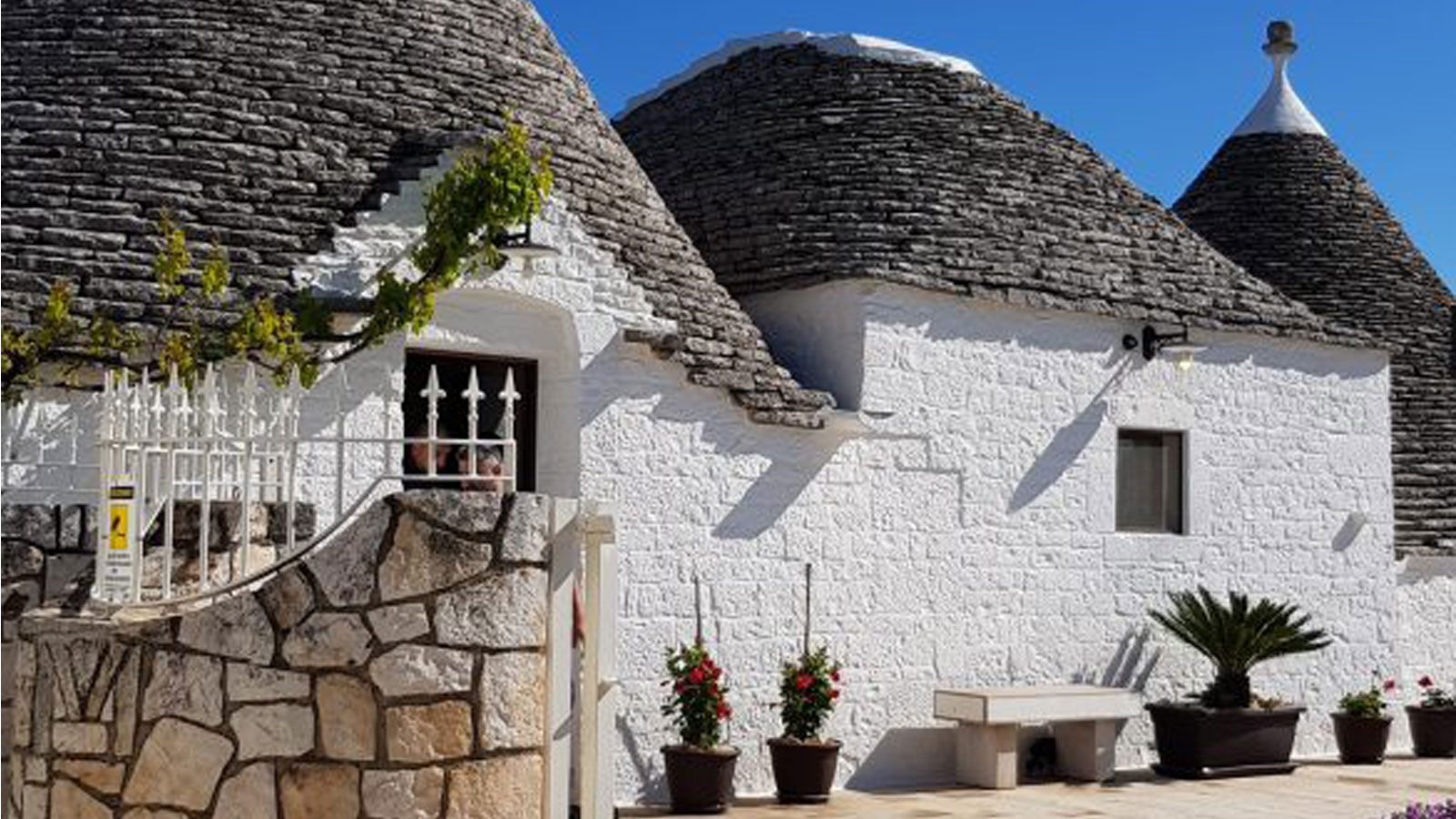 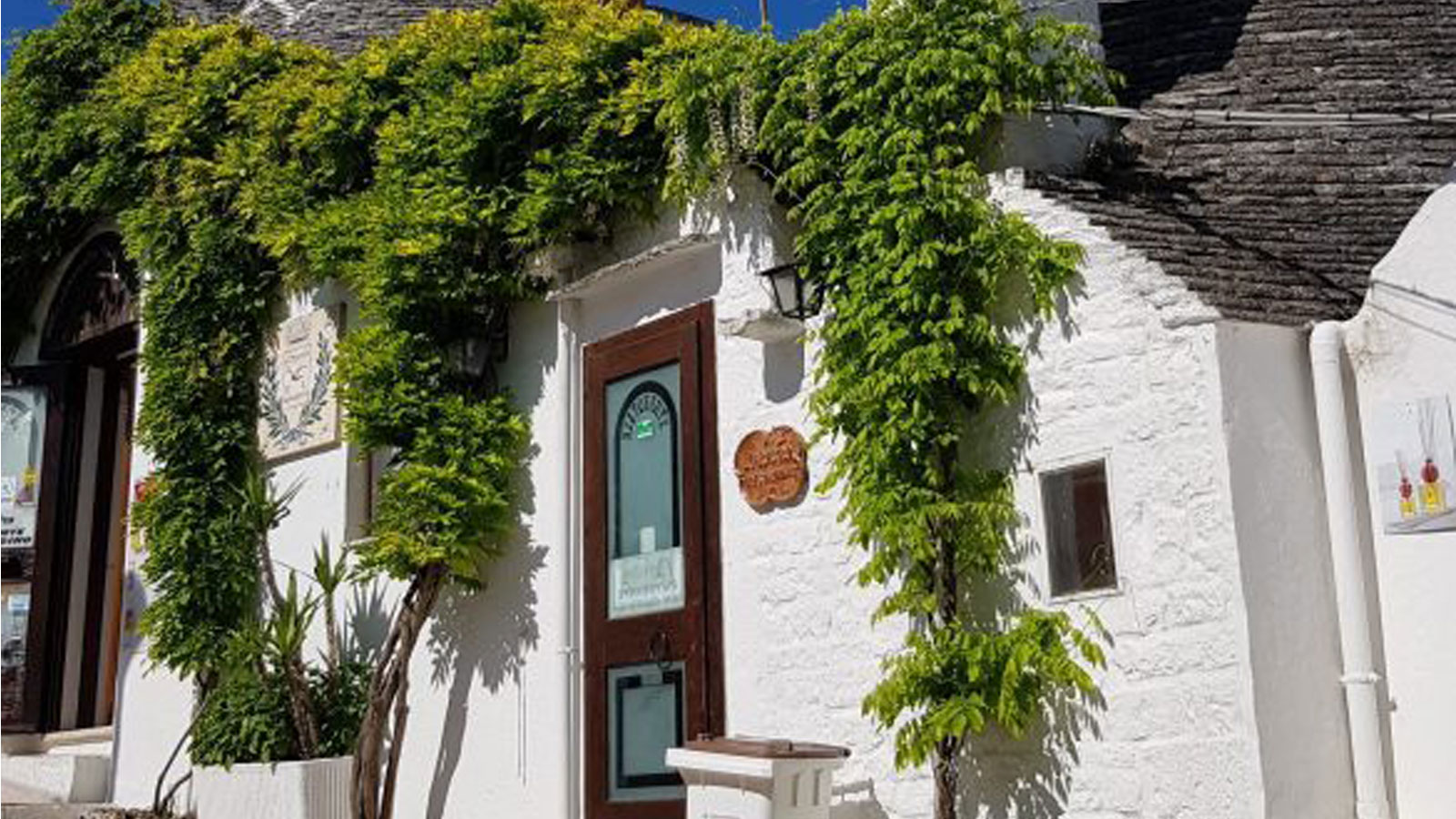 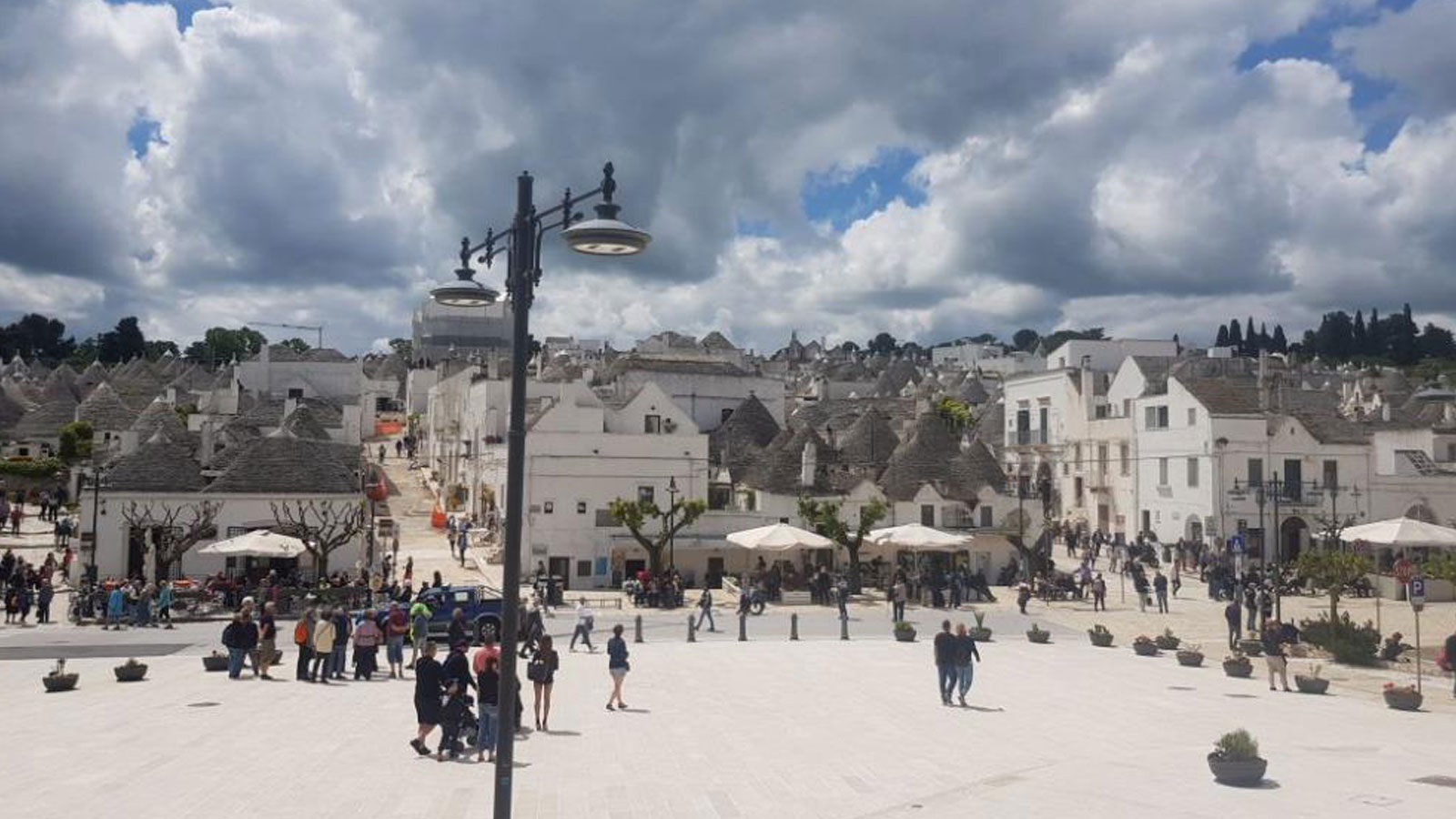 Finding a film set in Polignano a Mare!

As I approached Polignano, I wasn’t so sure about it at first, but as I continued along the coastline and reached the bridge leading to the old town, I was quickly converted. 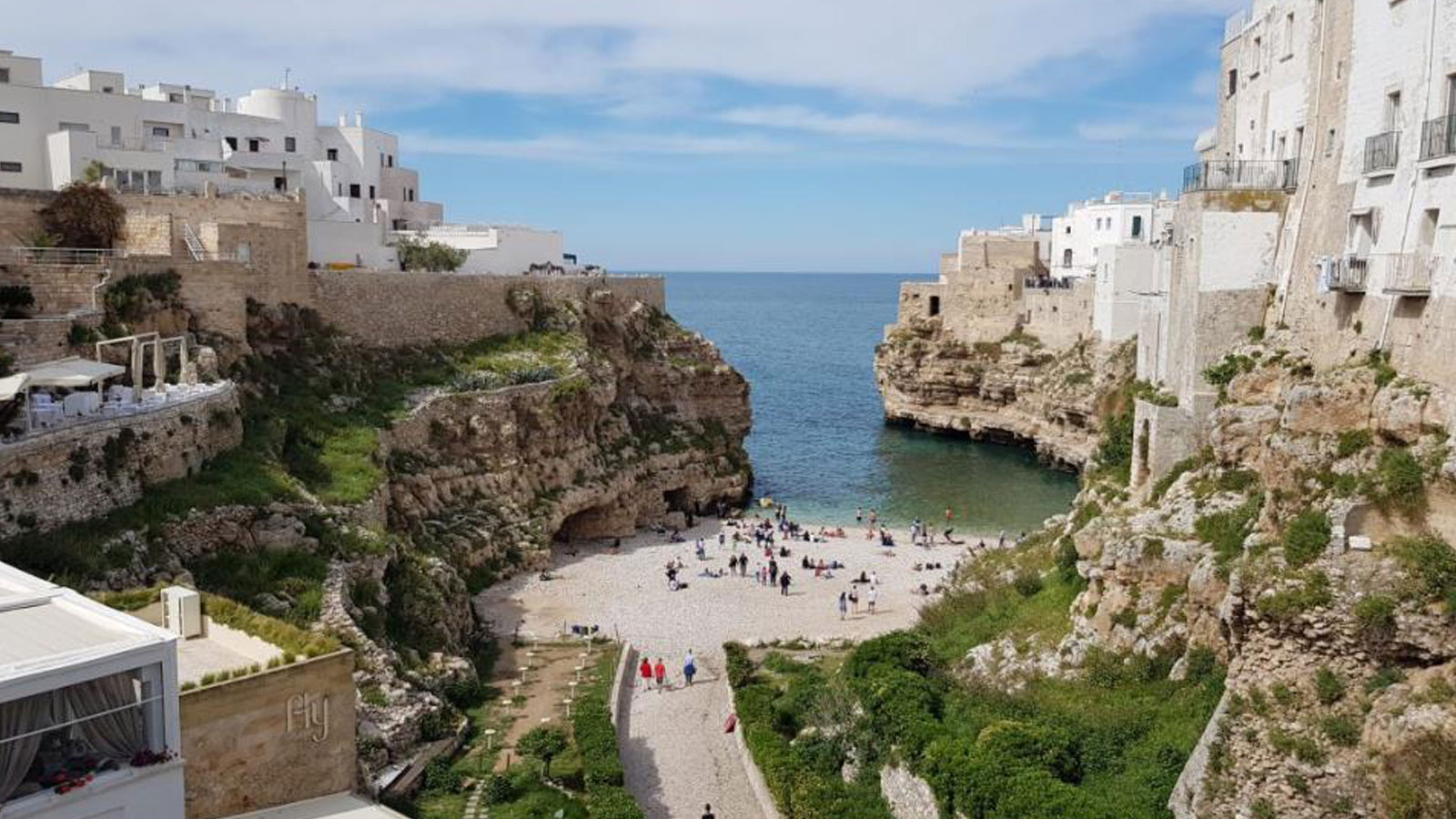 The old part of Polignano looks like a movie set, it’s so picturesque and cute. In fact, I was told by a lovely waiter who shared many tips of his town that our beloved Roberto Benigni is looking to film a remake of Pinocchio right here. Let’s hope it’s no fake news. 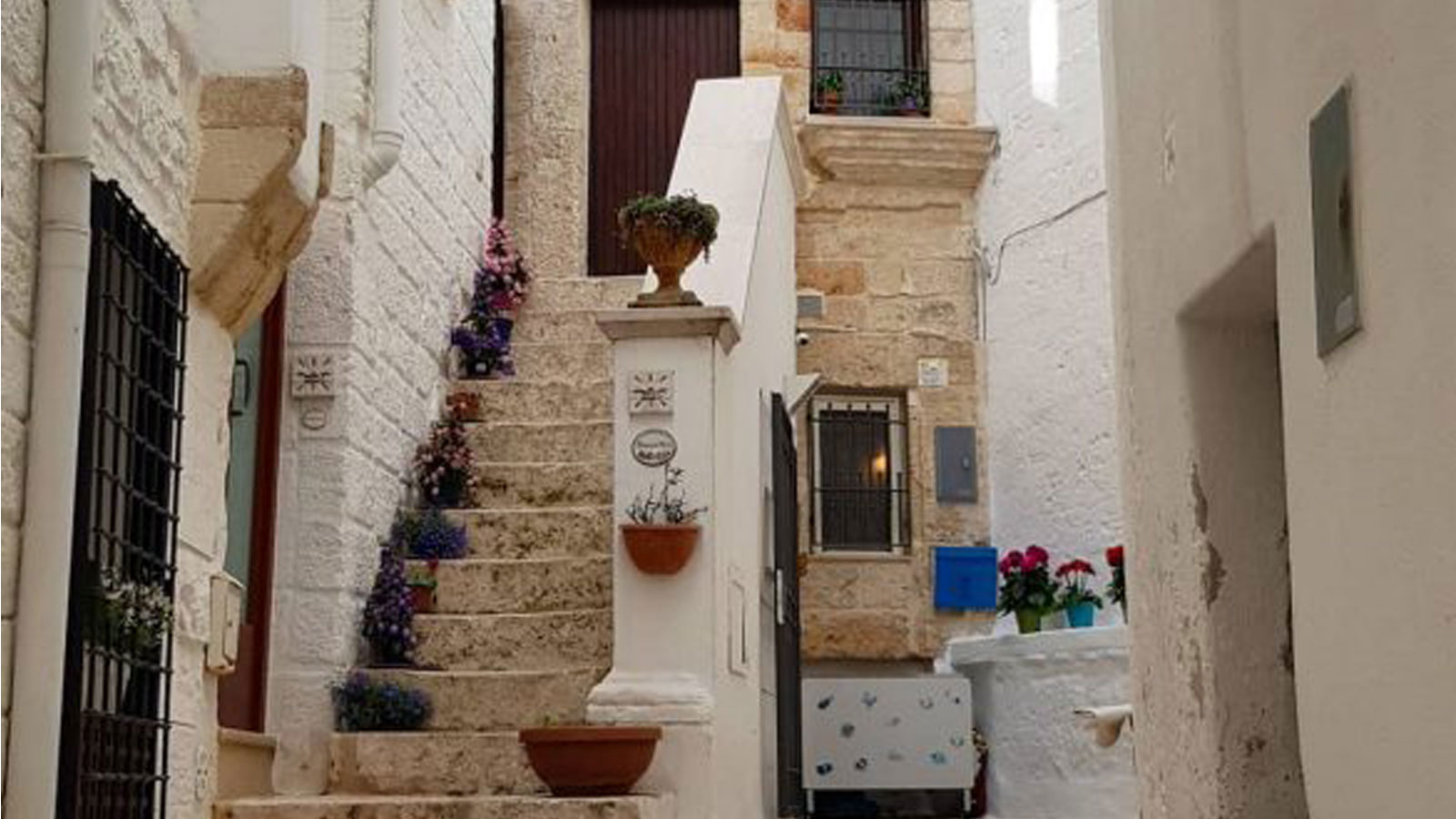 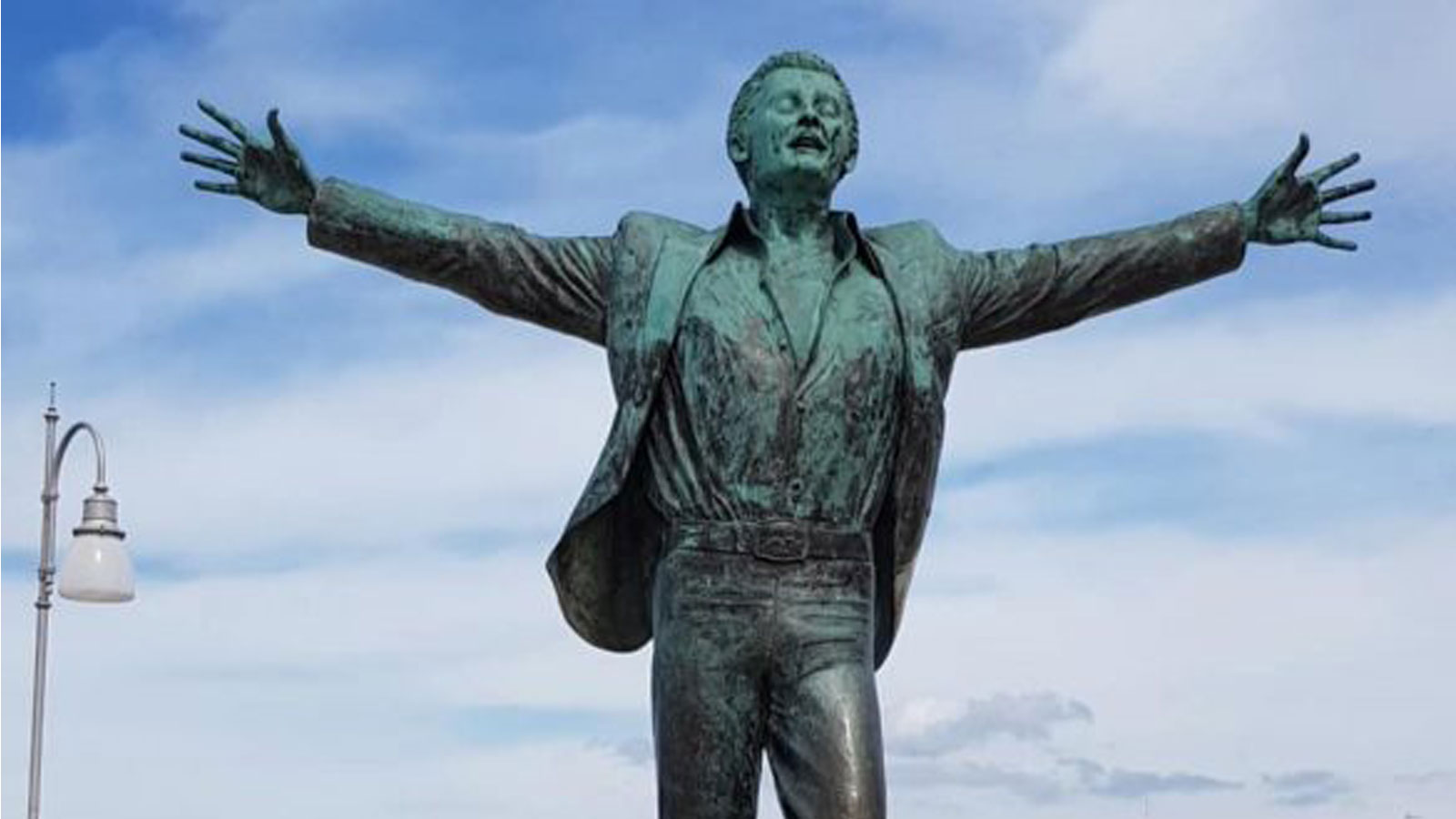 Getting a fringe in Monopoli

A dice throw away, and I’m in Monopoli! Haha. There was a good vibe around this place. After a delicious meal at a restaurant in the older part of town, and on my way back to the campervan, I walked past a number of hair salons and felt a sudden urge to get a fringe. That dreaded love&hate fringe.  I picked one and my hairdresser wore a very short, bright pink fringe, which I thought was super cool. I was tempted to go real crazy, but I wasn’t brave enough to do it… not this time! 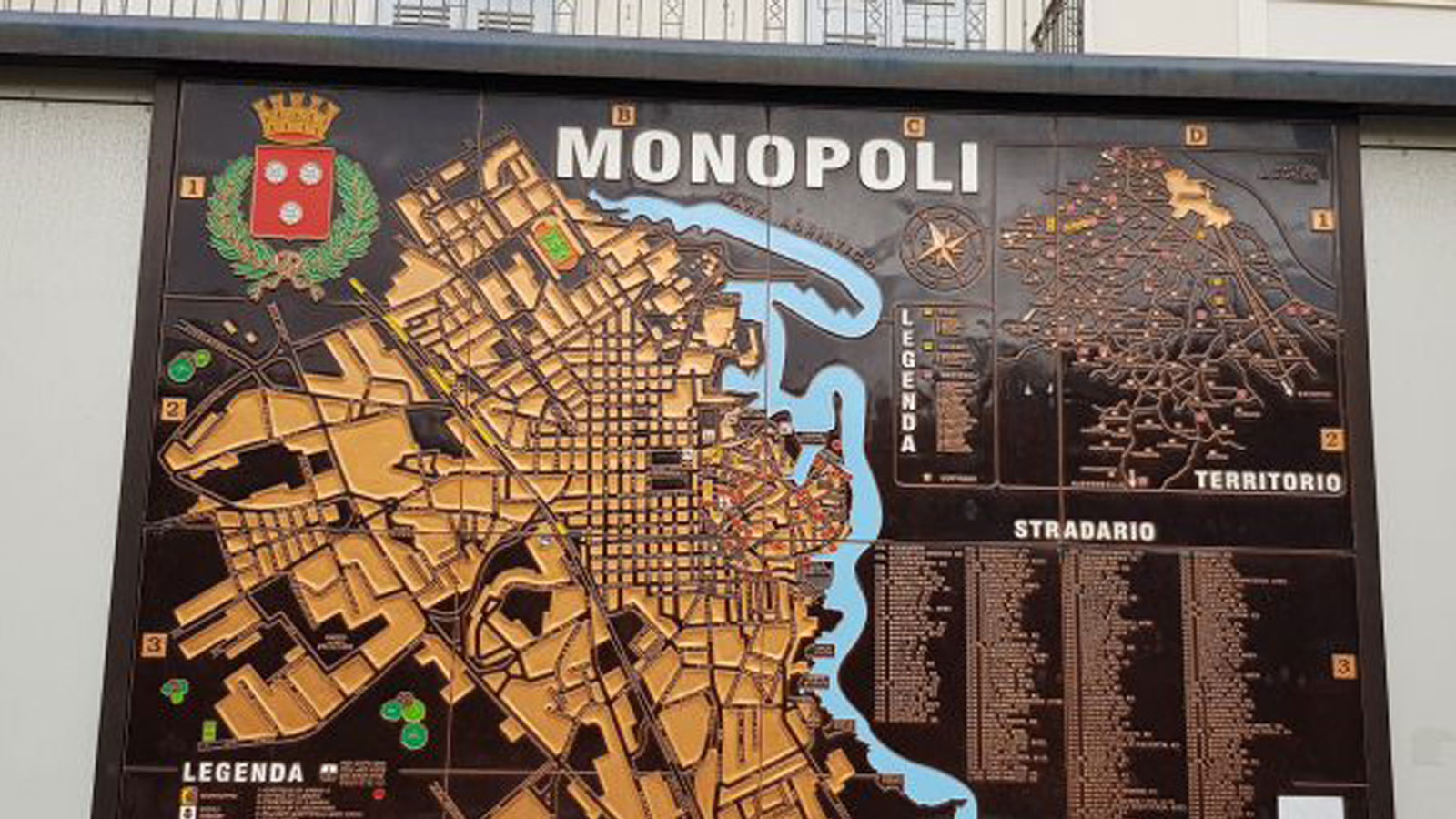 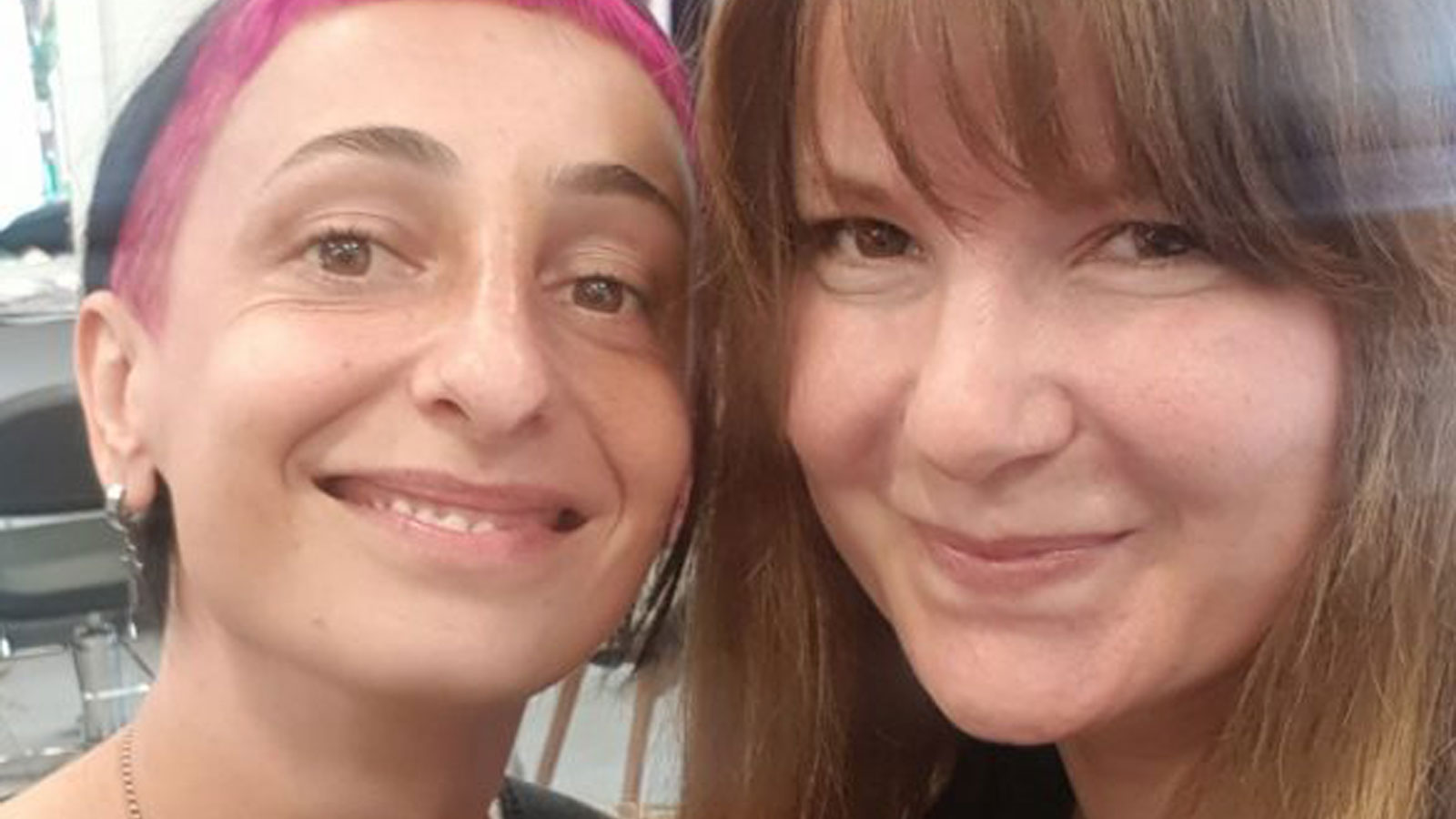 An Icecream in the Rain, in Lecce

After tasting and buying 3 litres of delicious olive oil in Ostuni, I targeted Lecce.

In Lecce it rained so much, but despite the grey and wet weather, it still looked beautiful and very friendly. I treated myself to a yummy artisan icecream and just as the lady scooped my portion of coconut flavoured goodness on my coned biscuit, I realised I had zero cash on me. Whoops, how embarrassing!  She offered me to just go enjoy it and come back later with payment. and so I did.

I discovered that Lecce too boasts an impressive Roman theatre right in its town centre.

A Beach to Myself in Baia dei Turchi

As I descended towards Otranto, I found a lovely campsite right by the Baia dei Turchi beach and the Alimini Lakes, called Agricampeggio Fontanelle. The staff and the facilities were really nice here and from your pitch, you can walk across a little wood to reach a gorgeous bay. The beach was completely empty and had it been a little warmer, I would have jumped in the sea! 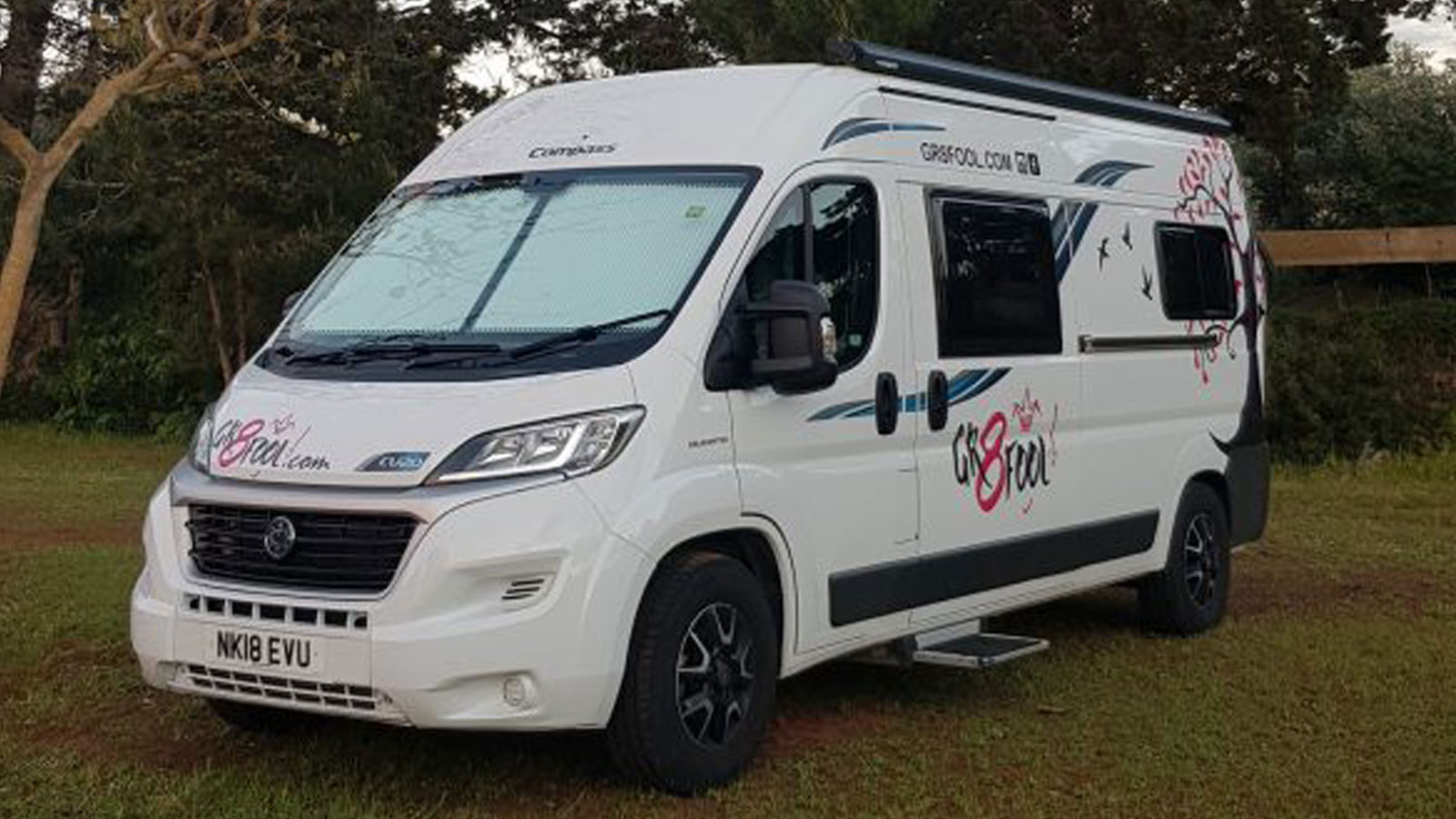 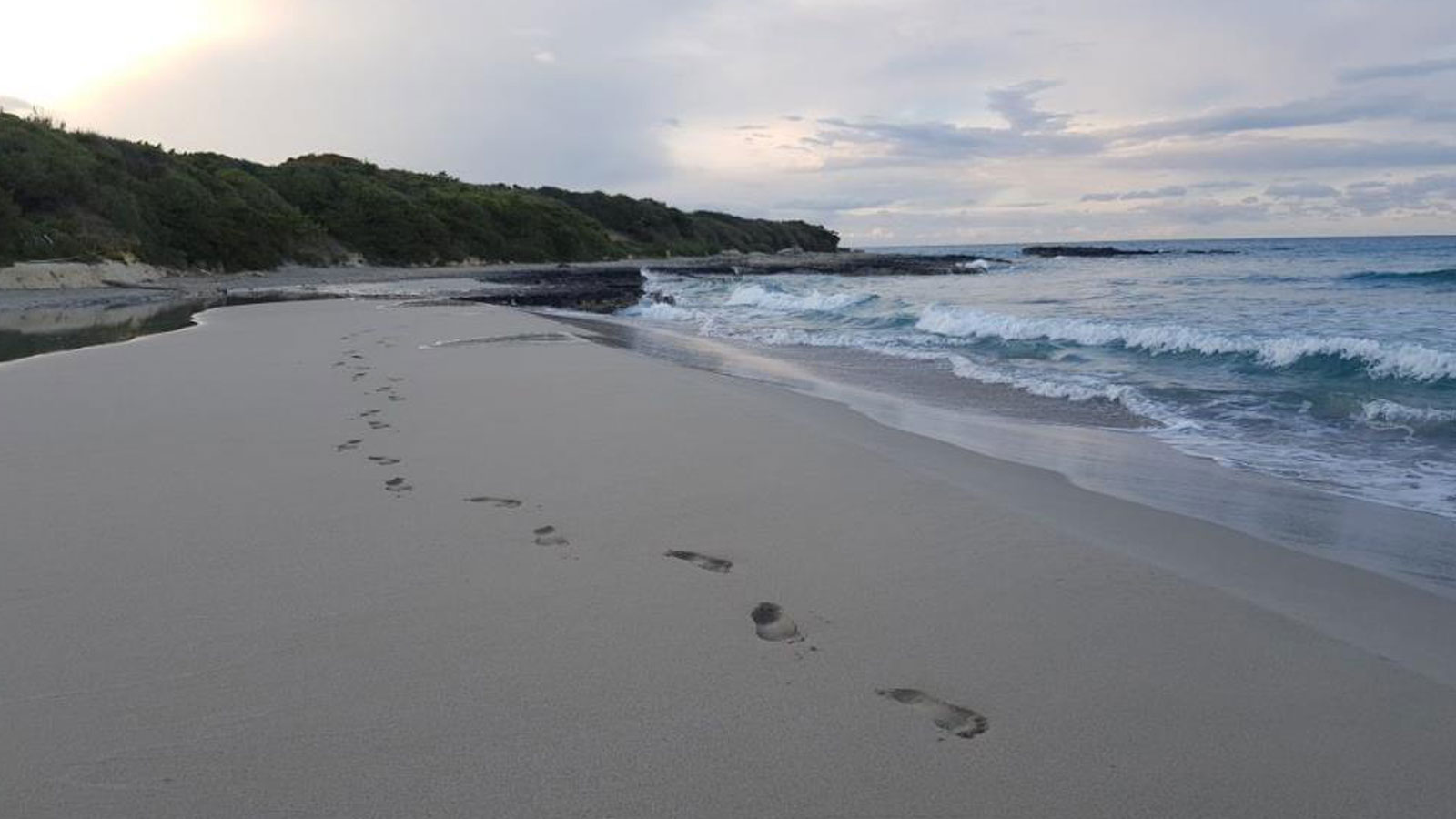 Insane Mosaics and a Parking Fine in Otranto

Otranto. Another beautiful old port town, set on the shore of a turquoise blue sea, that houses a cathedral with an incredible Medieval mosaic floor, dating back to the 12th century.  As you walk inside the cathedral, you’re immediately astounded by a huge Tree of Life and all sorts of strange creatures scattered around it. A must see. 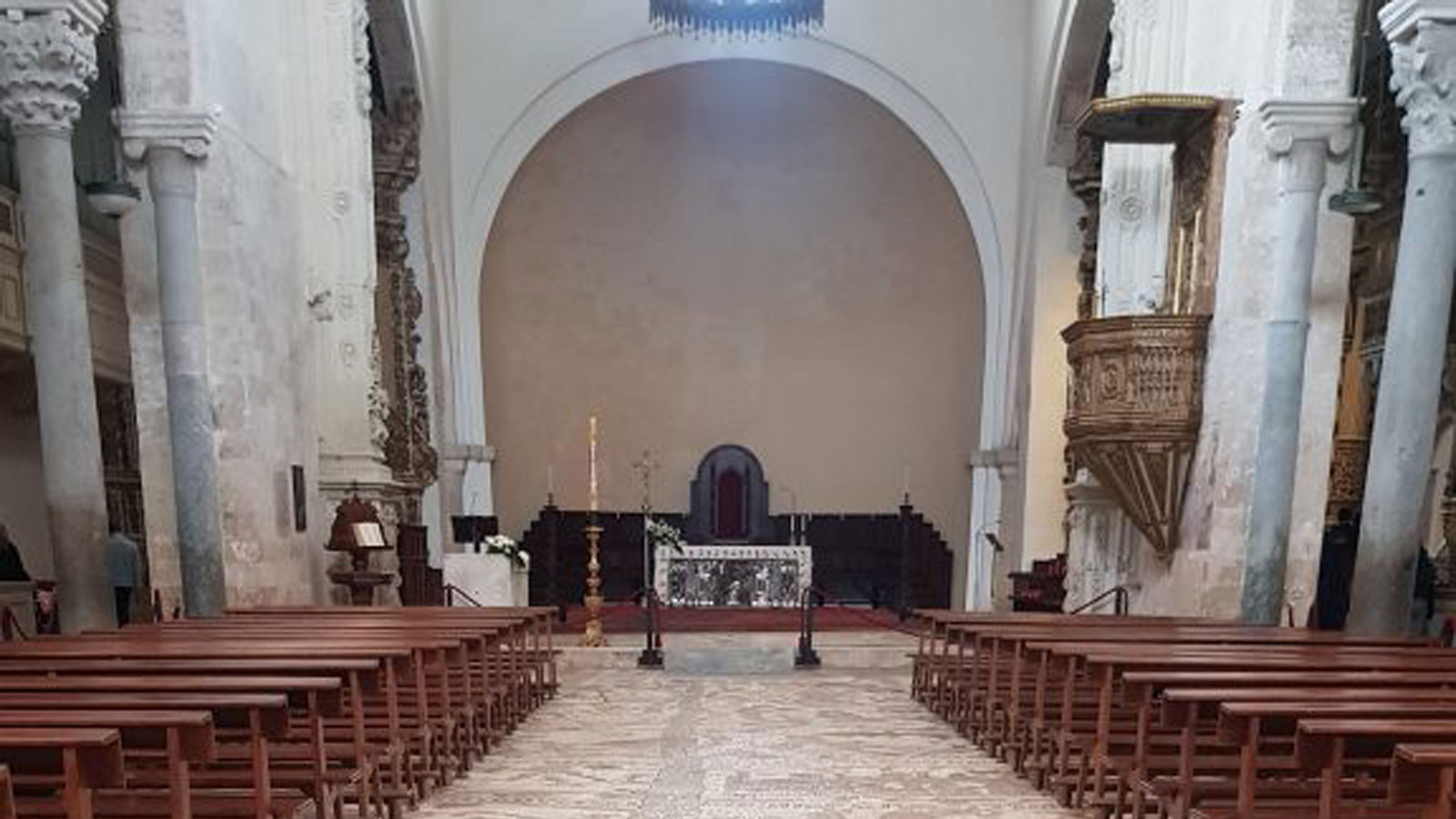 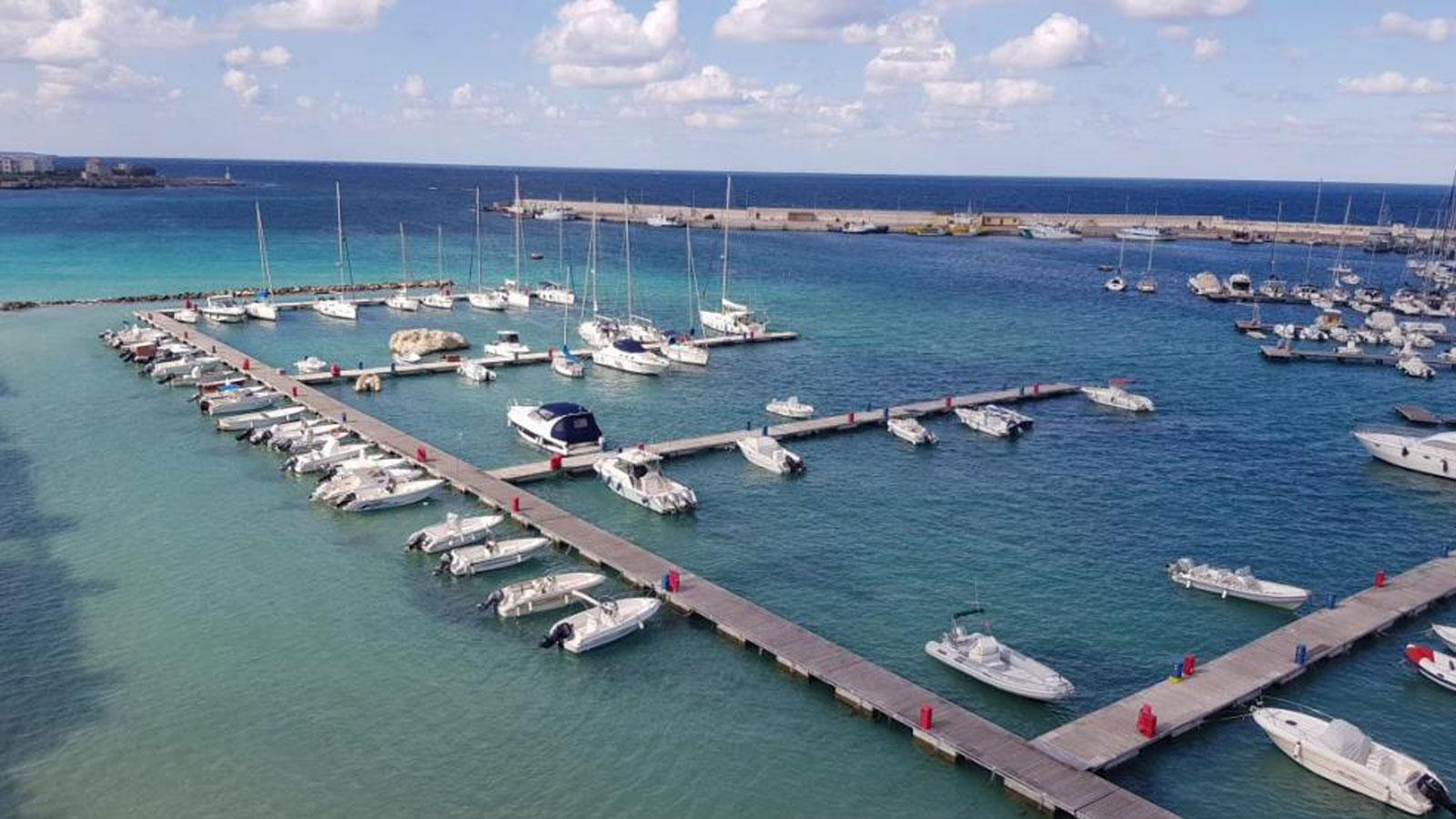 I got so side tracked by this gem, Otranto’s town centre and the lovely walk along the port that I lost track of time and earned myself a nice parking fine. I knew I was late.. but I felt the local police would somehow give me an allowance. And they did! I met the two warden ladies as I eventually reached the parking lot and they had waited half hour by Peter Van to give me a chance to get away with the penalty. They felt so guilty, but I thanked them so much for their kindness and I was happy to contribute the money to this lovely town.

I made a quick stop at the most Eastern point of Italy before embarking on the panoramic drive down to the most southern point of Puglia: Santa Maria Leuca. All the places I passed and Leuca too were still very quiet, as the holiday season is looming just around the corner. I loved the peaceful vibes, 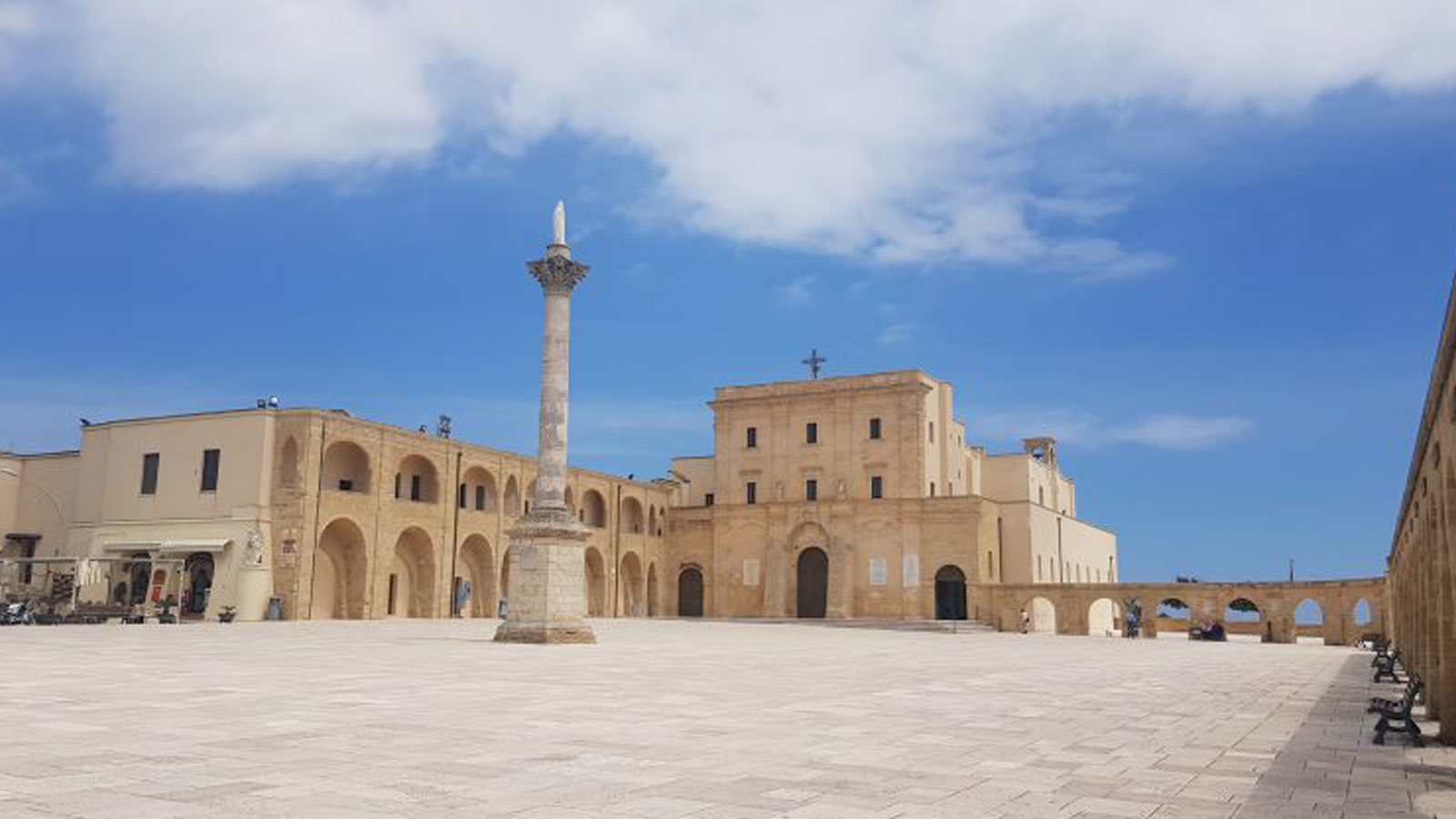 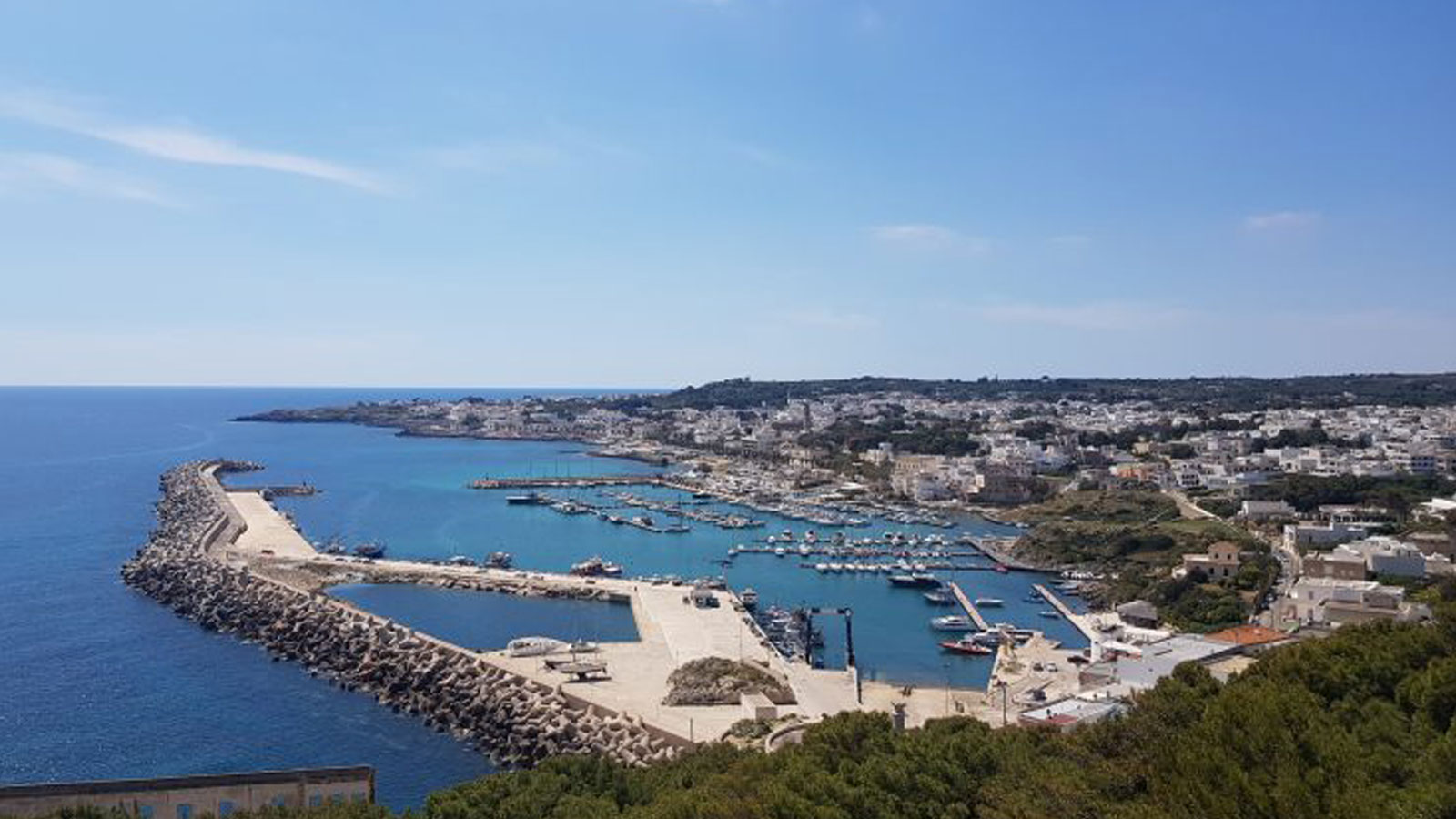 I was told the West coast of Salento has an amazing sea or in fact the best sea in Puglia, however unfortunately I didn’t get to experience it, due to a combination of unstable, greyish weather and the “off-season” status.  I enjoyed a two-night stop at Torre Colimena, where I stayed in a free carpark right on the beach and next to a vintage version of my Peter Van (with a tree of life drawn on its side!). 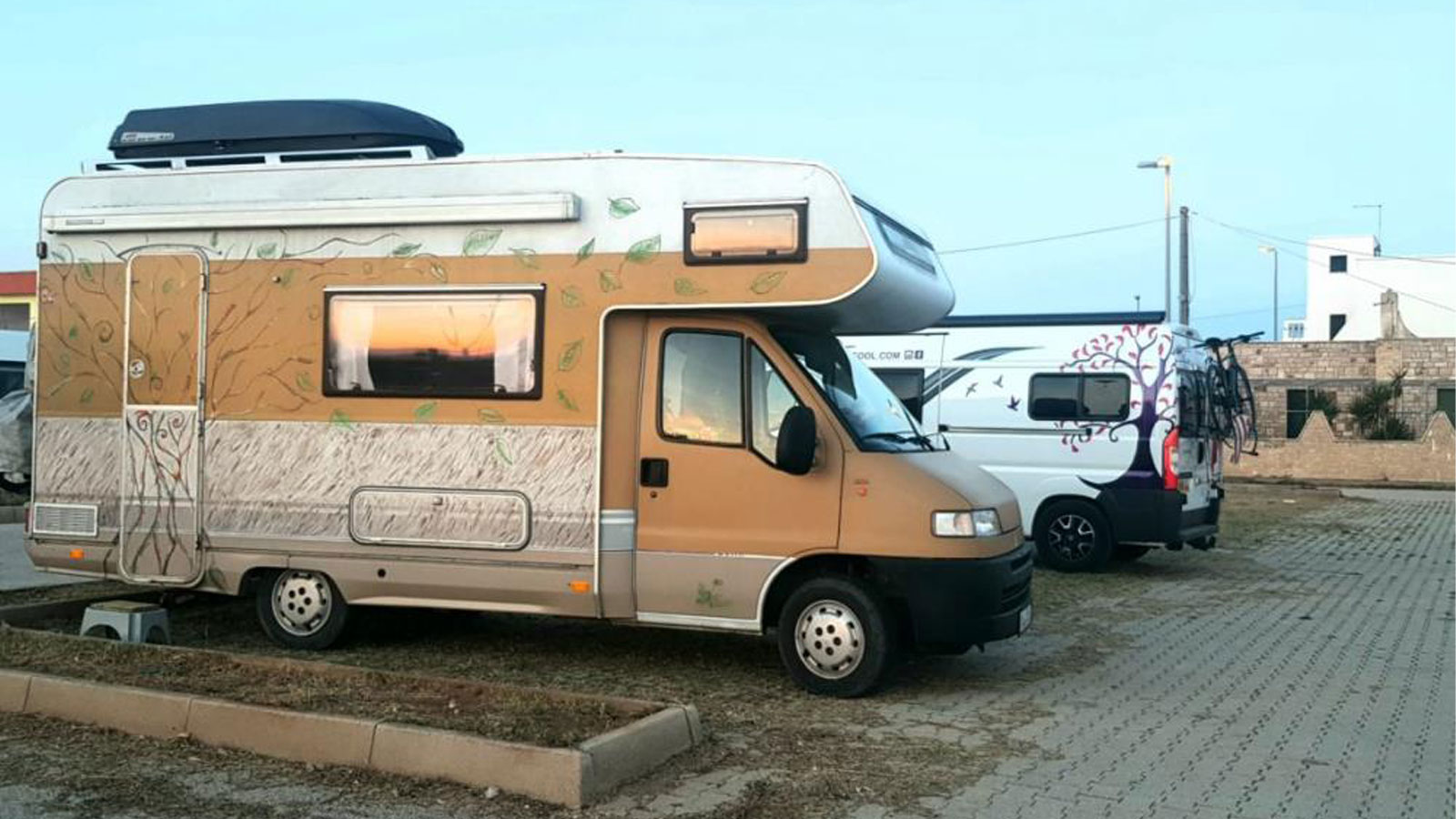 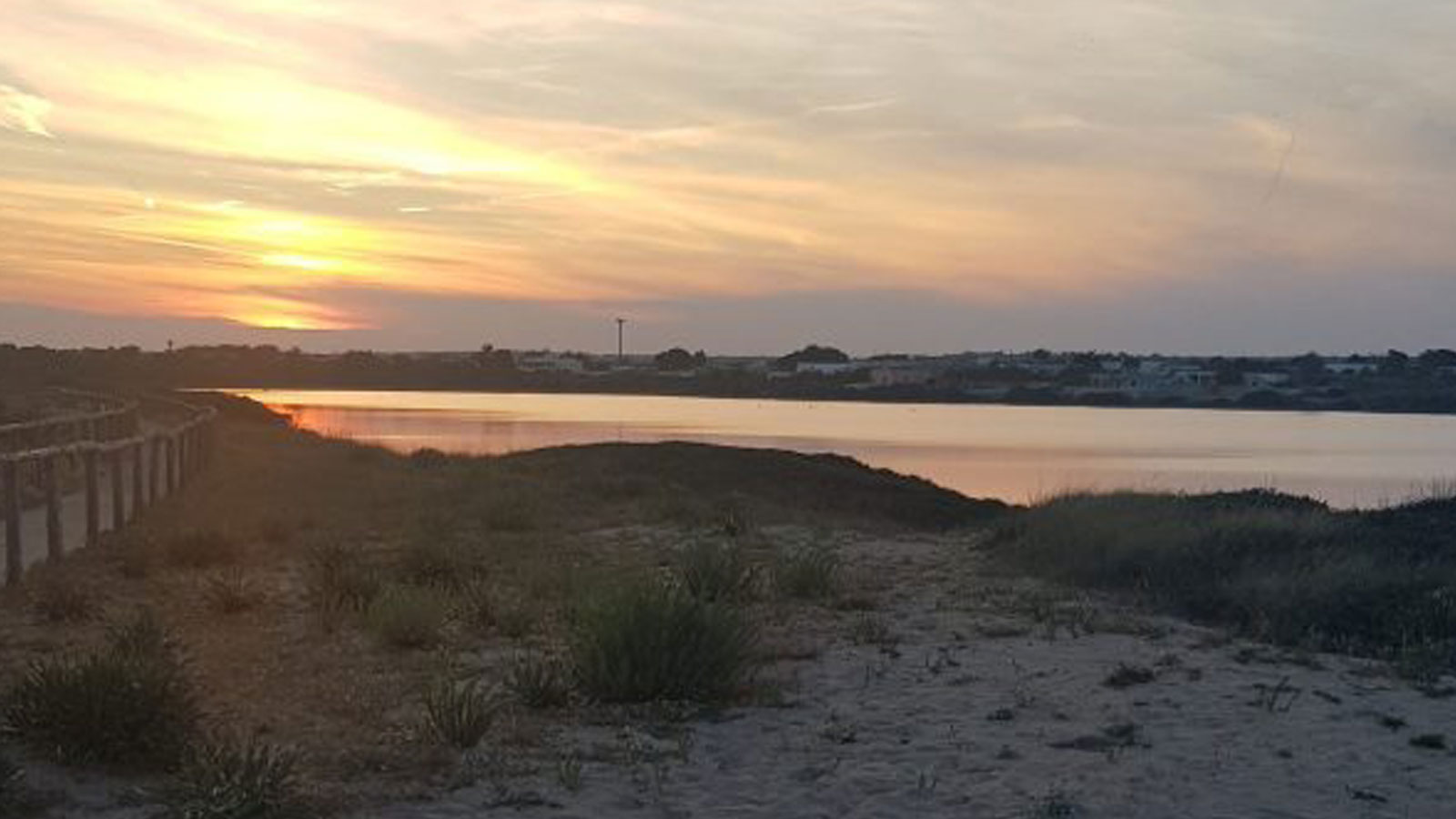 Here is what Torre Colimena is meant to look like (photo credit: villaodetta.it). 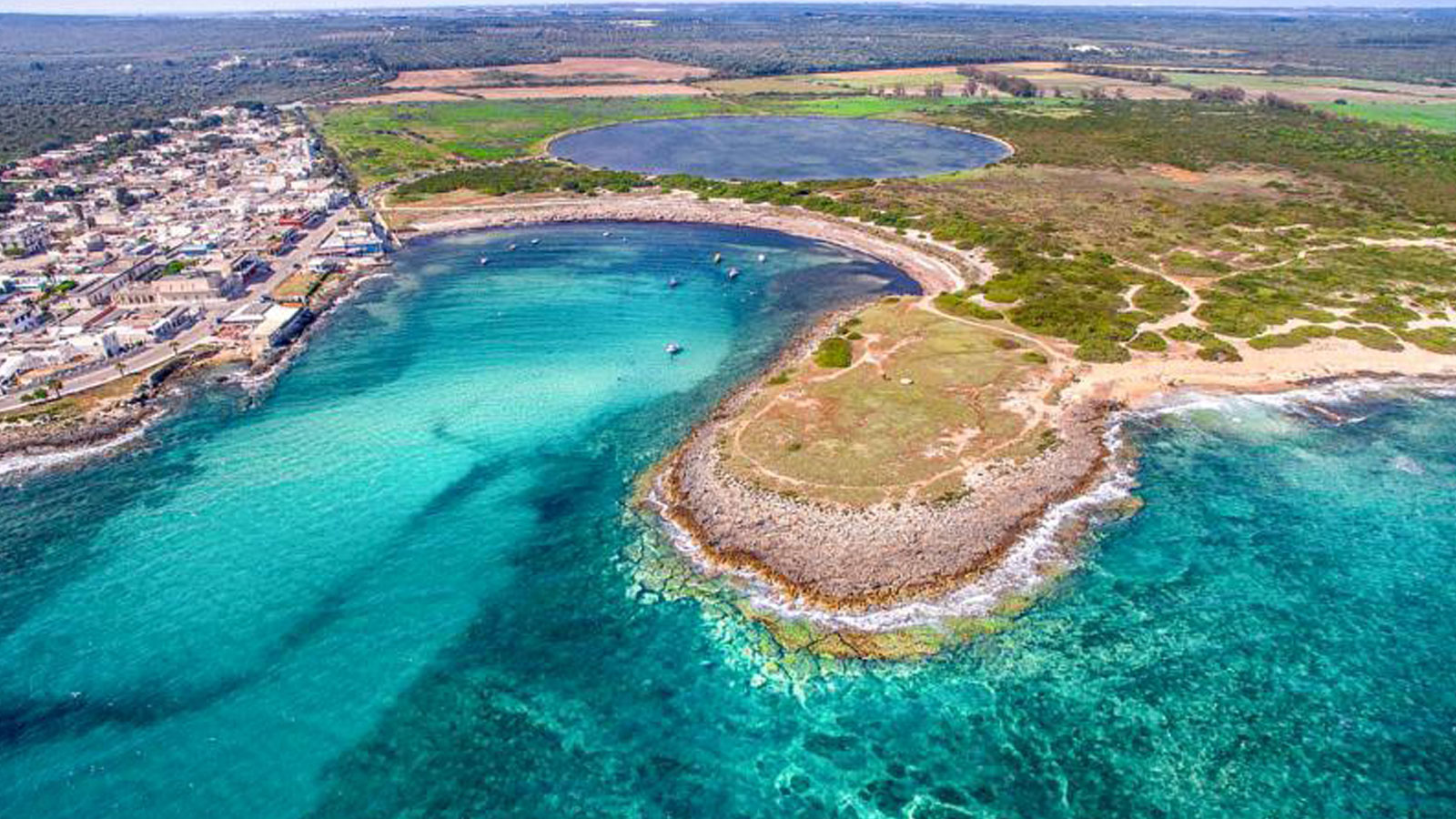 I stopped in this location for some flamingo-spotting on the Salina, right next the beach.  I saw a few flying and eating in the water but they were too far for me to get a good picture with my camera.  The pinky/white dots in the photo here-below are indeed flamingos, I promise.

Campomarino was highly recommended as the best beach of the region, and sadly I found it in a sort of “abandoned” state, still snoozing before the wave of tourists arrives. The shaky, grey weather also hid the blue colours of the sea, which would otherwise look totally different.

I only spent a few days on the West coast before heading towards Brindisi on the Eastern side, where I’d catch my ferry to Greece.  I thought I would spend the last night in a camping site nearby, however all the places near enough Brindisi were closed when I turned up. At least 3.

Luckily the owner of my final attempt saw me turning up at the gates feeling quite disheartened and he offered for me to park up right by the entrance under their CCTV cameras, and by their 24/7 guard-house.  I took up the offer and relaxed on my last night in Puglia, half wild camping.

The next day in Brindisi, my ferry was not due till later in the day (I was crossing overnight) so I had time to enjoy a stroll around town and a veeery long lunch. I sat at the same table for many hours, using it as my desk to catch up with work and writing.

Some ferries offer “onboard camping” option but unfortunately not the one I was booked on.  I packed my duvet and managed to sleep comfortably for a few hours stretched over 4 seats while Peter Van chilled on the deck. The crossing to Igumenitsa took about 9hours. 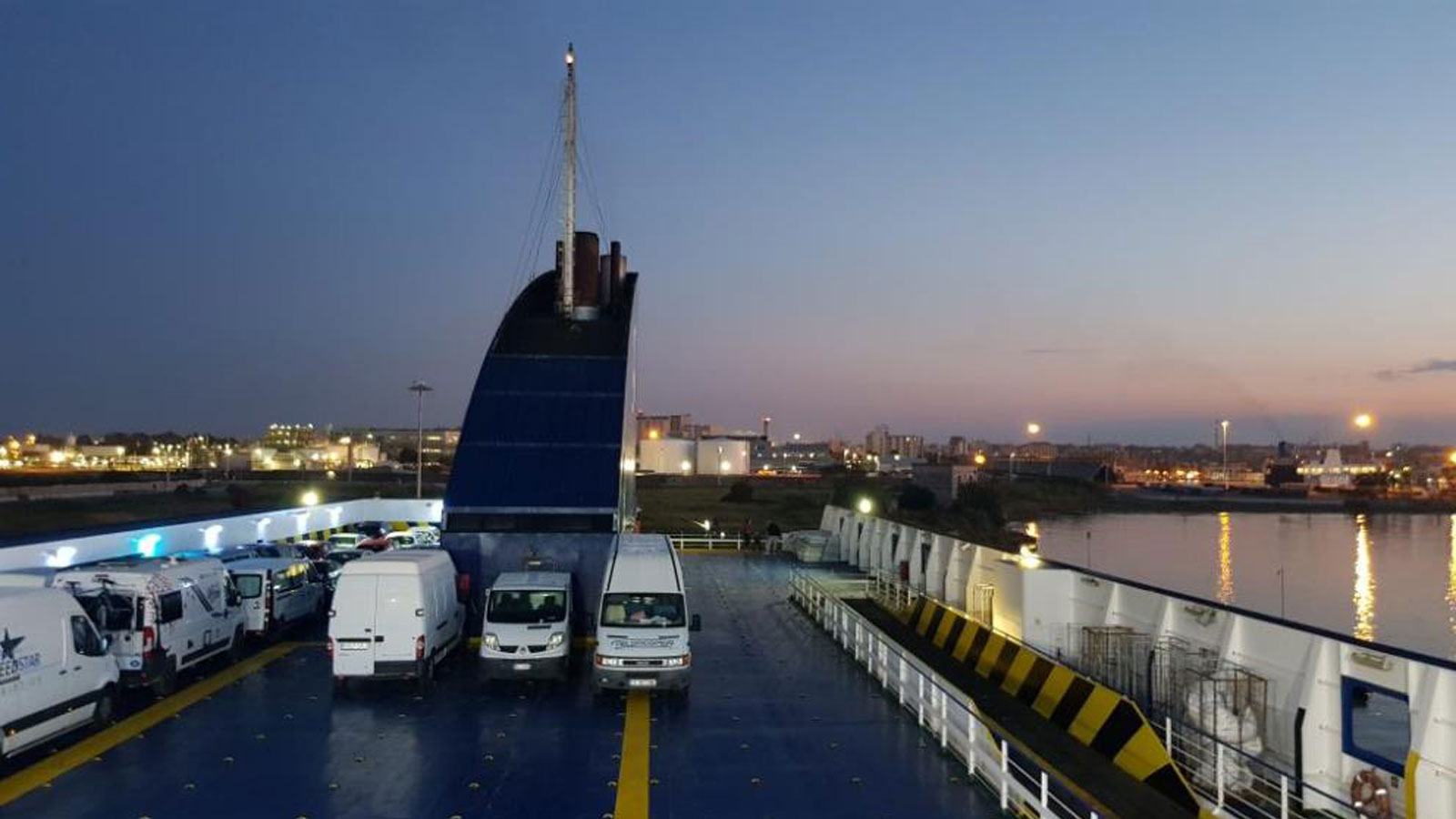 Ok, the weather wasn’t the best and warmest for it, but Puglia was beautiful. And less beach-time meant more time at cafes and in my cosy home-on-wheels, to do the work I love: coaching and writing.

It definitely felt like I was there “off-season”, with many work-in-progress, towns only just coming out of hibernation and campsites still looking abandoned before the start of the summer.

But I’ll be back!