The UK Staycation continues... and Grey Gappers find themselves on Hovis Hill! 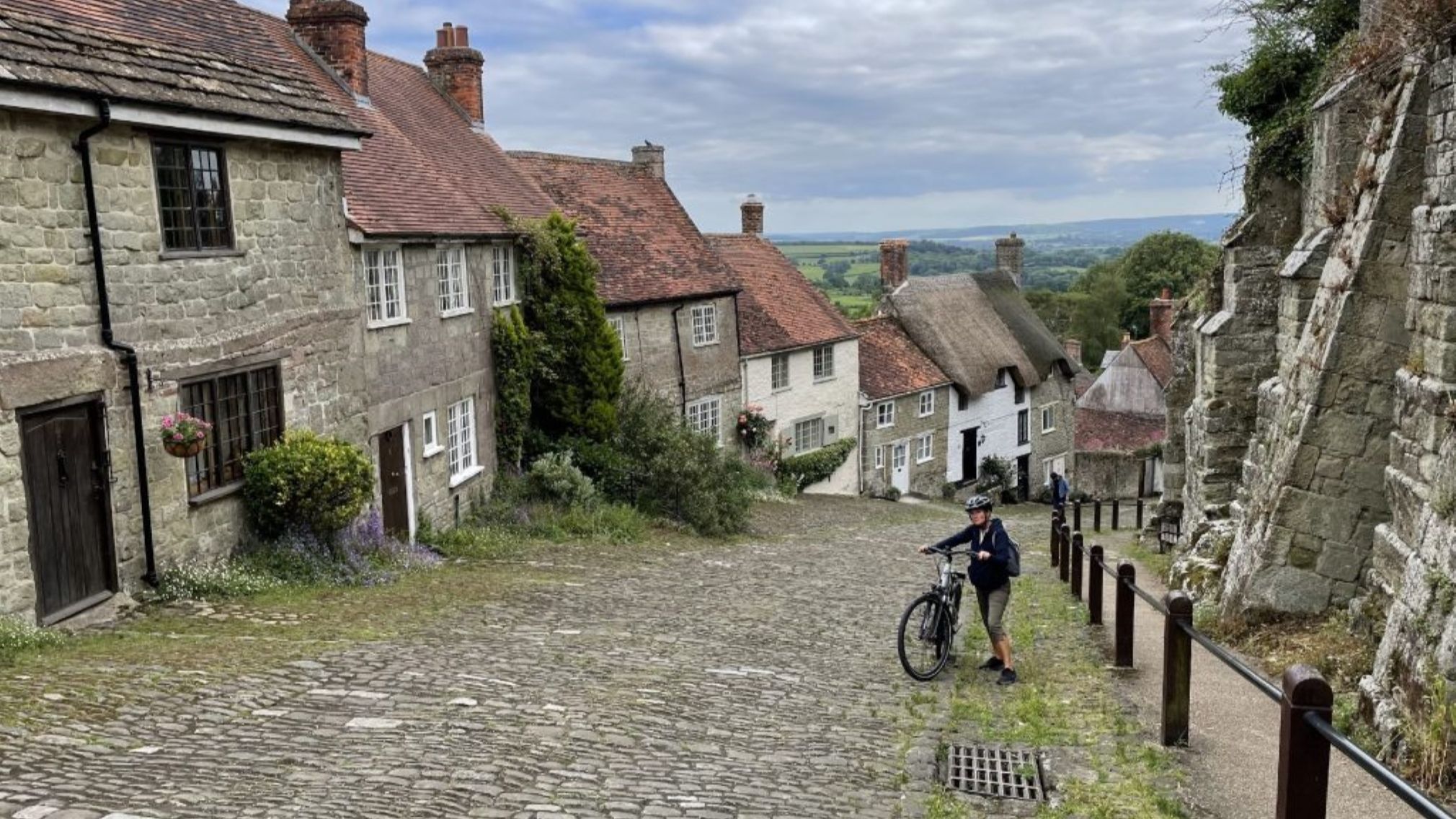 Monday saw a grey start to the day again for the Grey Gappers, but Elddis ‘Buster’ and Adria ‘Jez’ were having a lovely time catching up with each other and their motorhome adventures. Jez, the was very happy as he had just found out, that day, that Katherine and James were able to keep him, after finding an expat motor insurance for him. So, Jez will be heading back to Crete quite soon. 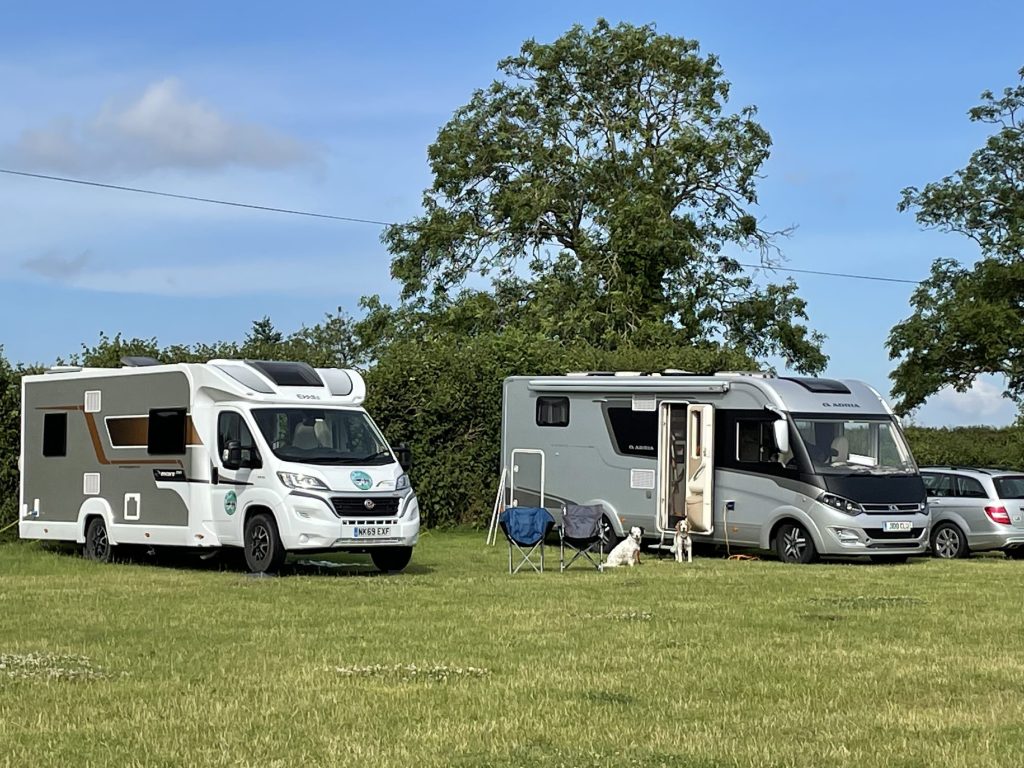 We left the boys recounting their exploits to each other, or more likely our exploits with them, and how we might or might not be mistreating them, and with thankfully the availability of Katherine and James’ car, we were able to continue our exploration of the area and headed into Bath. 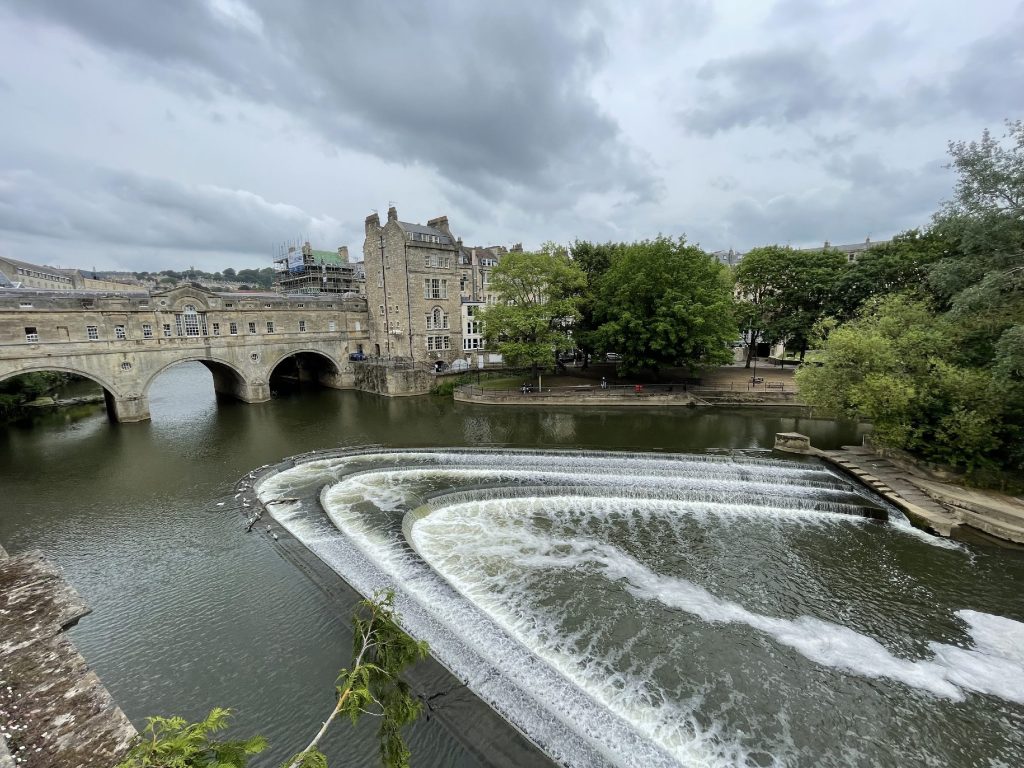 Bath, is a World Heritage site and the largest city in the county of Somerset and is of course known and named after its Roman built baths. Baths are of course my favourite thing, and my once-a-year special is coming up soon, so we just took in the view of them from the outside. I have been to Bath a few times before, and it’s a delightful place. Katherine was our tour guide for the day on our walk around the city. 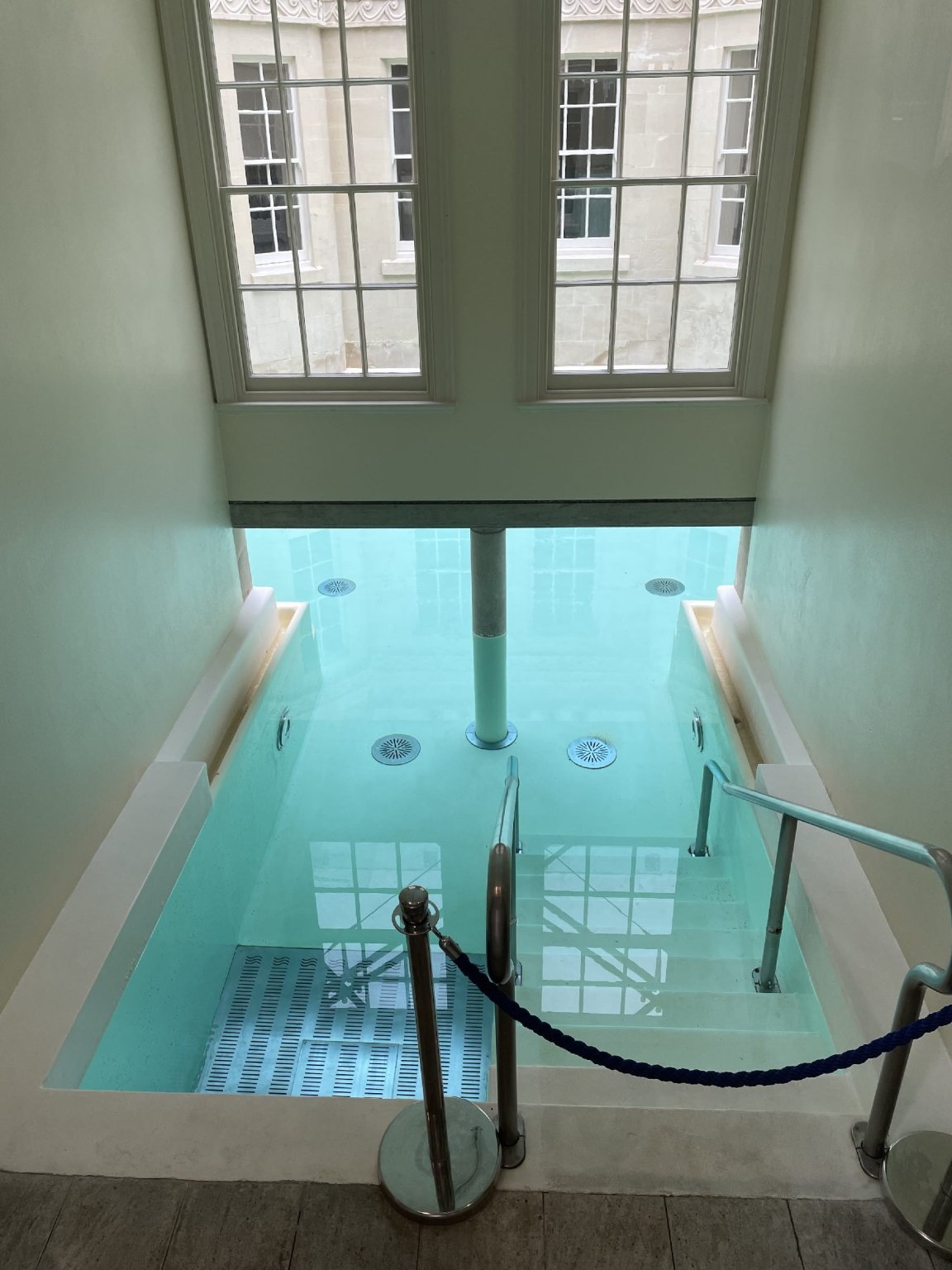 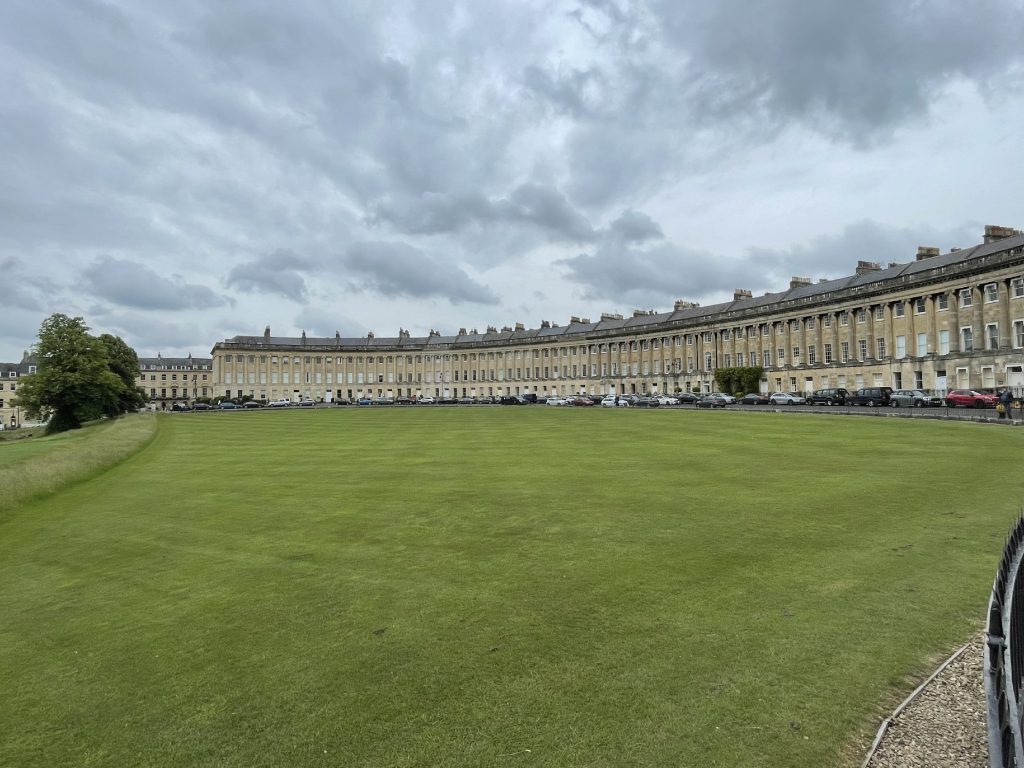 The stunning Royal Crescent in Bath, 30 residences and a hotel

Tuesday, after a few hours of retail therapy and shopping requirements, making the most of the car, we said our goodbyes to Katherine and James, plus to our two god-dogs, all of whom we have missed since parting on our travels over a year ago after Lockdown in Turkey. It was joyous to catch up again. 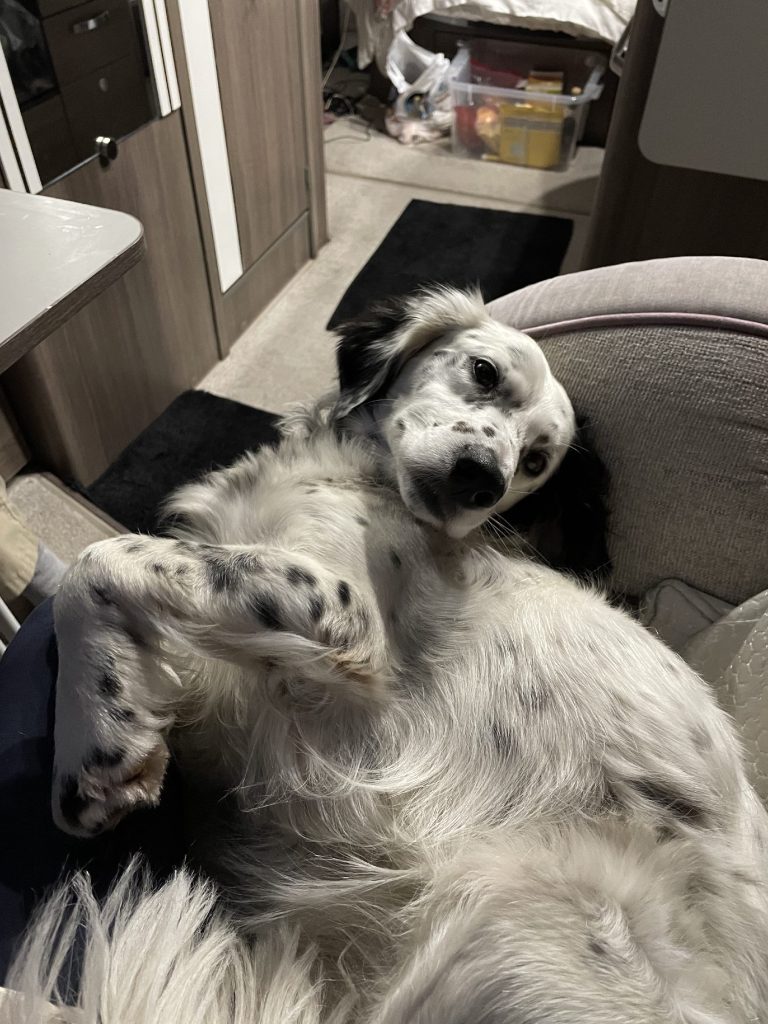 Corrie, one of our God-dogs

Next stop for us was Shaftesbury, a beautiful town, made famous of course by the young delivery boy, his bike and the near vertical Gold Hill. The drive there, with me at the wheel of Buster was thankfully made on the larger A roads, without the Sat Nav taking us down any single tracks!

The sun was shining and again the countryside of England was simply glorious. We arrived at Blackmore Vale Caravan and Camping Park early afternoon, pulling up at the sales part just literally yards from the A30.  The site for our parking wasn’t obvious unless it was to be amongst the ‘for sale’ caravans and nor was any reception obvious. David took to his phone to confirm location along with the booking references. There was then a few swear words, with me saying “what’s wrong dearest, do tell”.  Rather sheepishly, he explained that he had booked a Blackmore Vale site in Worcester, some 100 odd miles away, and paid for it. Oops! I had said all along that we had only made a telephone confirmation for this one and this was proved correct when we found reception and site at the back of the sales area, and the man welcomed us, ticking us off on his check in sheet. 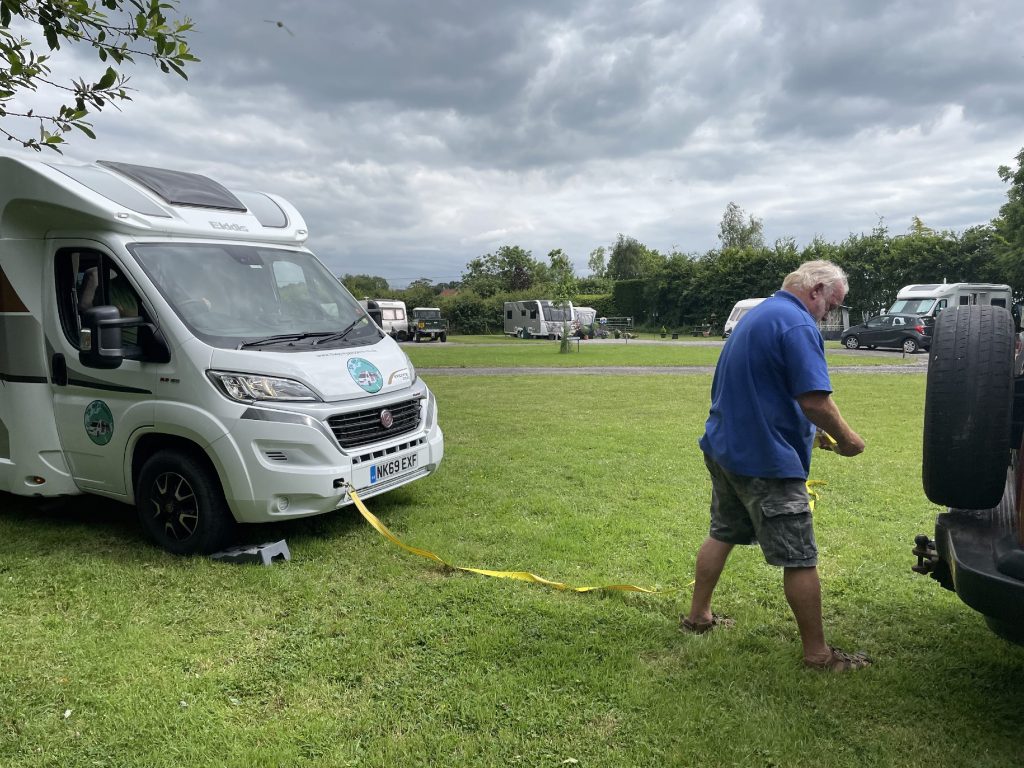 Buster being towed onto the chocks

It was lucky he was welcoming, as he then had to tow us up onto our chocks after we wheel-spun on the soft muddy ground.  After setting up, with the afternoon still being nice, we took to our bikes and headed to Shaftesbury. The first part of this cycle and very much the downside of this site was we had to negotiate a small section of the busy A30, before tracking the small single road that headed up to hilltop of the town. The young Hovis delivery boy was actually lying I feel about his round, as before we even got to Gold Hill, we both were completely puffed-out after a mile long uphill stretch that took full power and low gear. Having said that, David did of course have to prove the poor young lad wrong and, again, with full power and low gear, made it to the top of Gold Hill as shown in the advert. I, however, did recreate the advert and opted to push my bike up, which given the weight of electric bikes and the slippery cobbles was my weight training for the day. The town is absolutely quaint, with cute, quirky individual shops, and a lovely choice of traditional English pubs, where David was able to sample a few different ales. 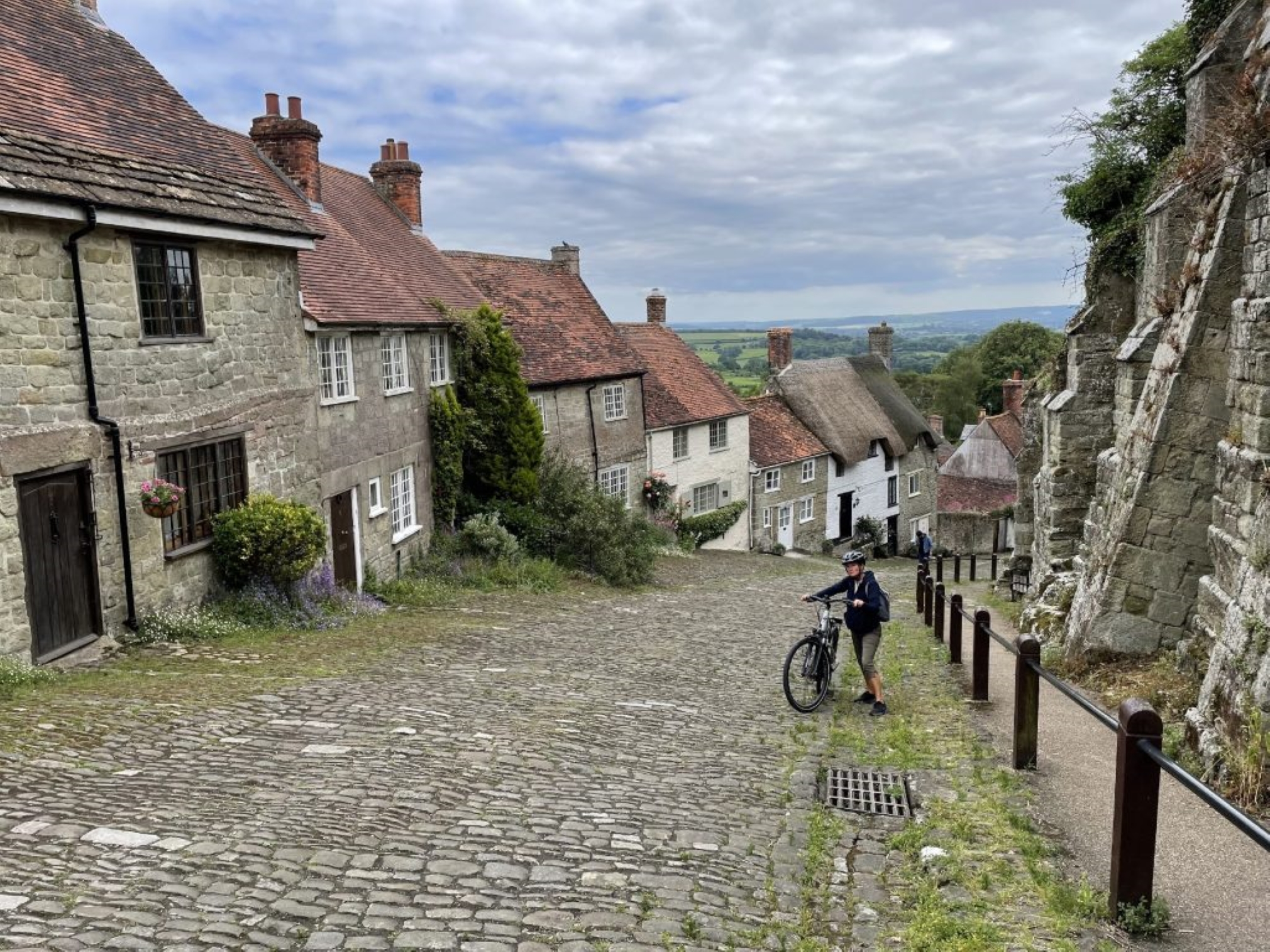 Me, being true to the Hovis ad and pushing a very heavy bike uphill 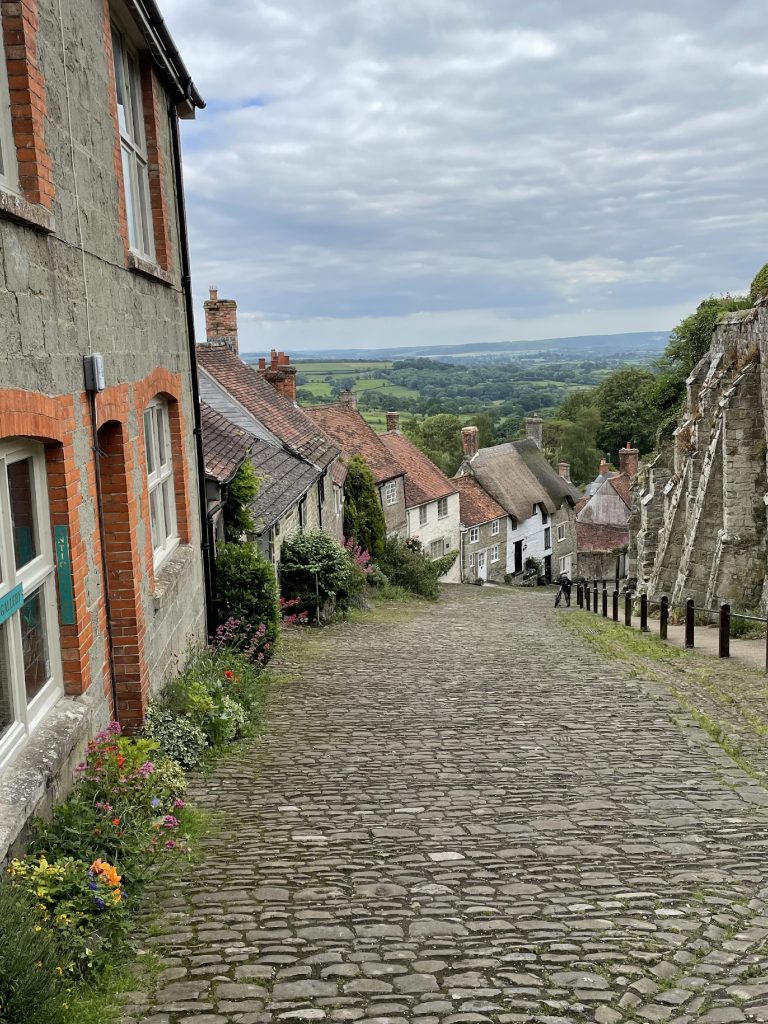 Such a classic view, but only one of the many hills that make up this area 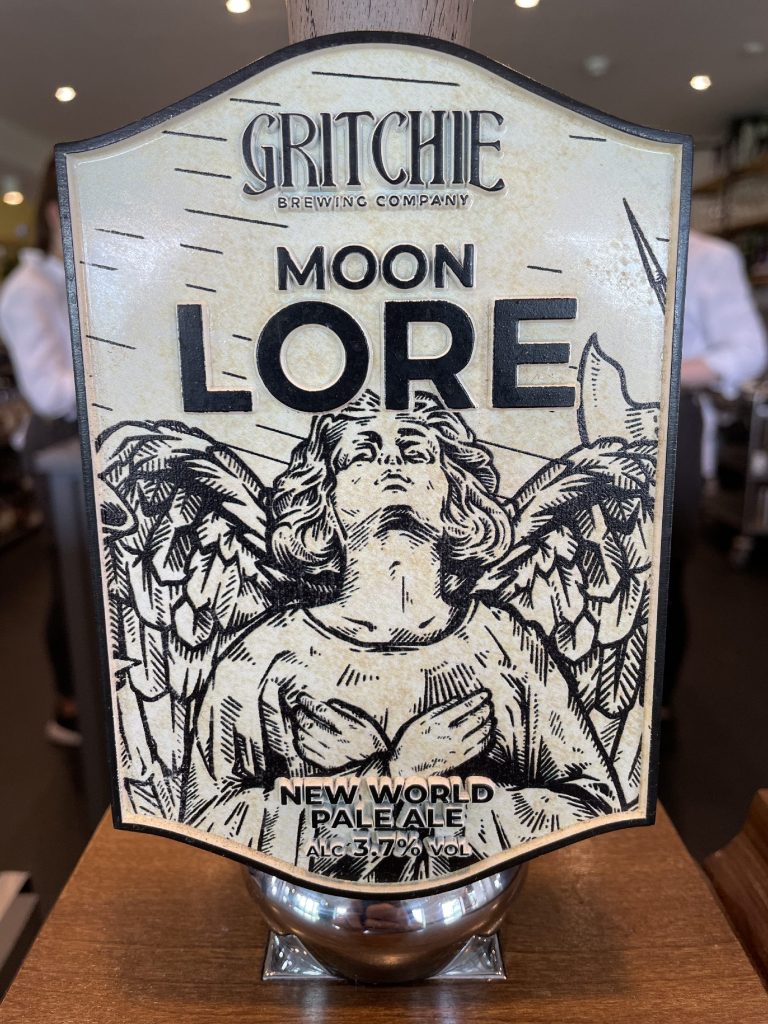 However cute Shaftesbury was, we both felt that we might have overbooked our days on this particular site and if indeed we had had the flexibility of Aires, we probably would have moved on, as for this particular site you really needed a car to get around and do anything. The A30 making any of the cycling and walking we like to do very hard - and with soft grass, the moving of Buster on a daily basis just wasn’t practical. That said, we were both super happy, as our friends Debs, Dave and Patsy were coming to visit us, having found a B&B in the nearby village of Mere. So once again, we, with the aid of local taxis and Dave’s car, were able to spend two lovely evenings with them, recounting all our various tales and of course the ever-present Covid stories. 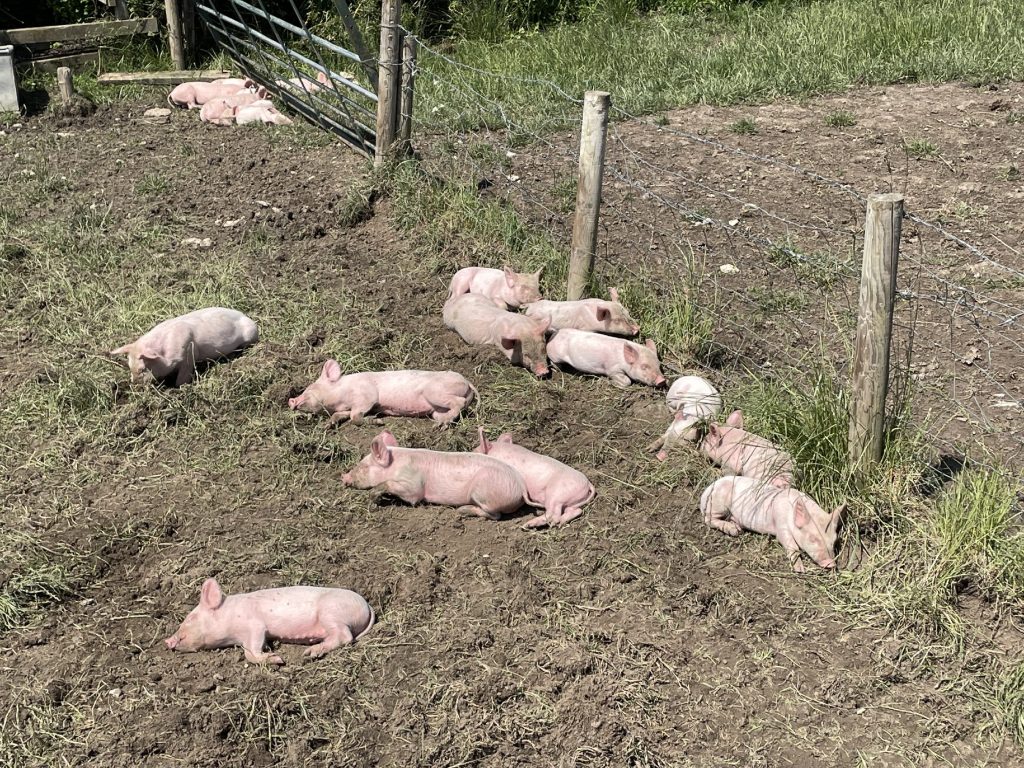 Little piggies on one of our cycles 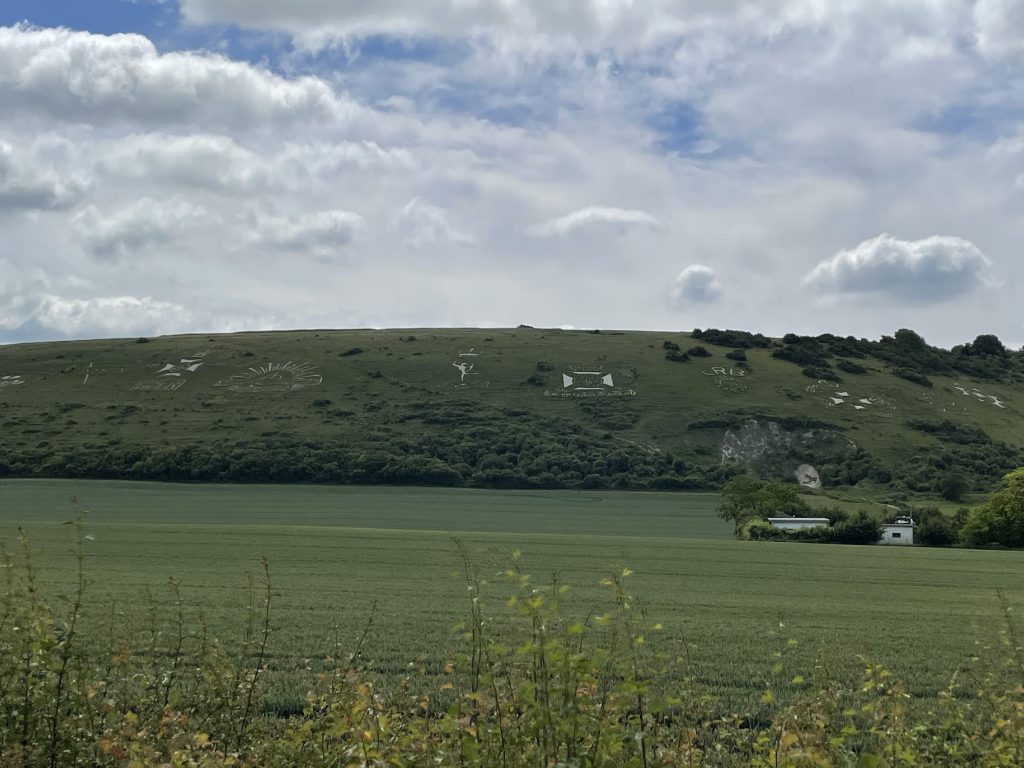 The Badges of Fovant. The original ones being dug by soldiers stationed waiting to go to France during the 1st World War. NHS and Fire Brigade have been added later. 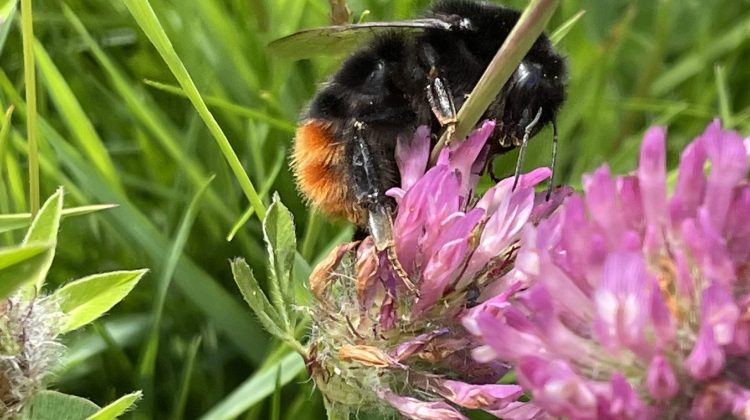 The Red-tailed Bumble bee. Discovered this in Mere, we thought was rare but apparently not, still cute though!

We are ending this busy bee week spending more time with lovely family and friends in Plumpton, East Sussex. The reunion is extra special for us, as we are being reunited with our delightful furry rescue - Pino the cat, who is now living happily with Dot, Liz and Keith in Plumpton. We are also lucky as we are getting to house sit as well as Pino sit, while they take a staycation. Pino loves the huge garden, seeing it as his whole hunting area, along with the nearby fields, but also delights in having the comfort of regular food and a lovely soft bed to rest his weary head when the hunting of mice becomes just a bit too much. 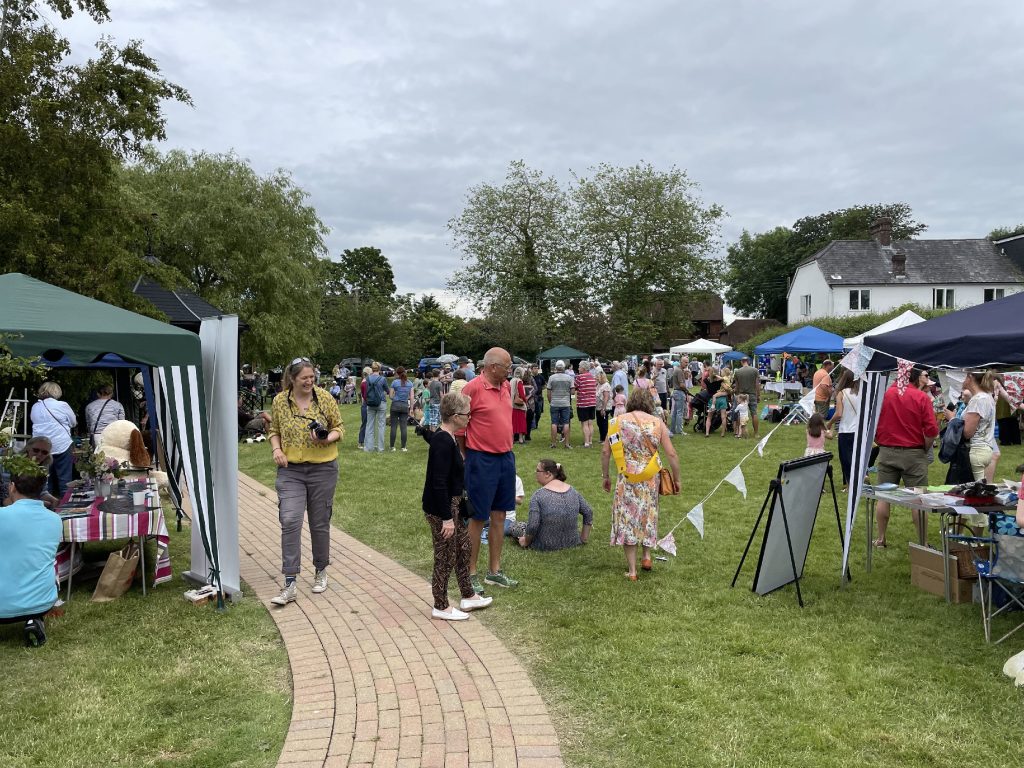 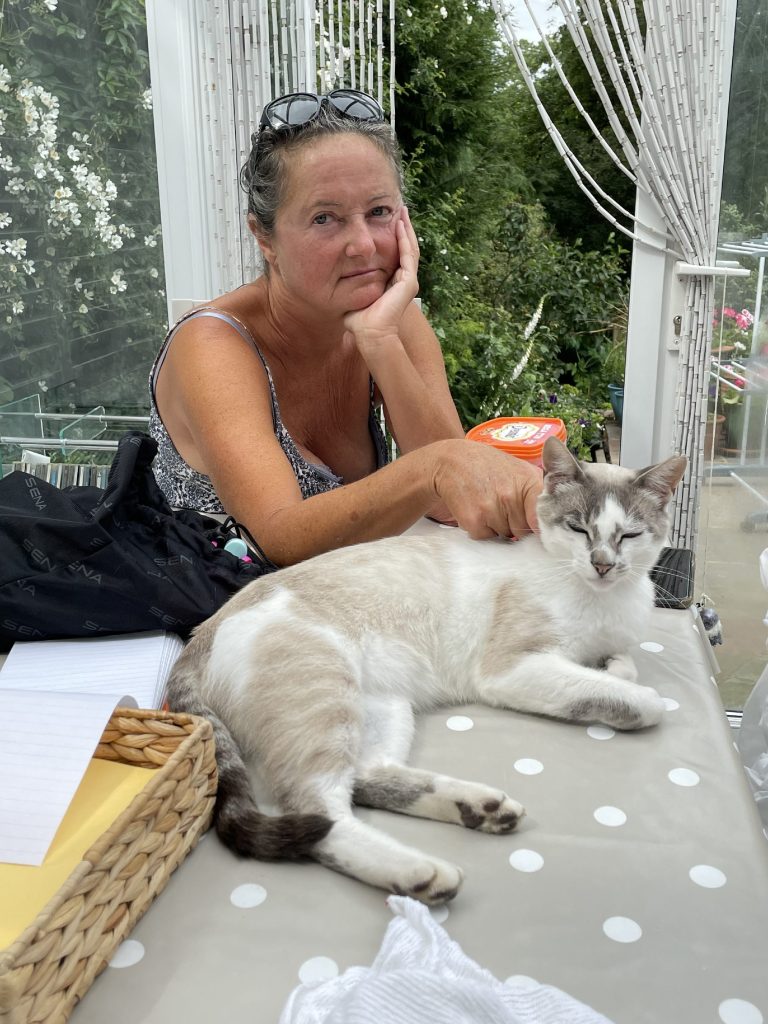 Not sure why I look quite so unhappy, but Pino completely at home on the table 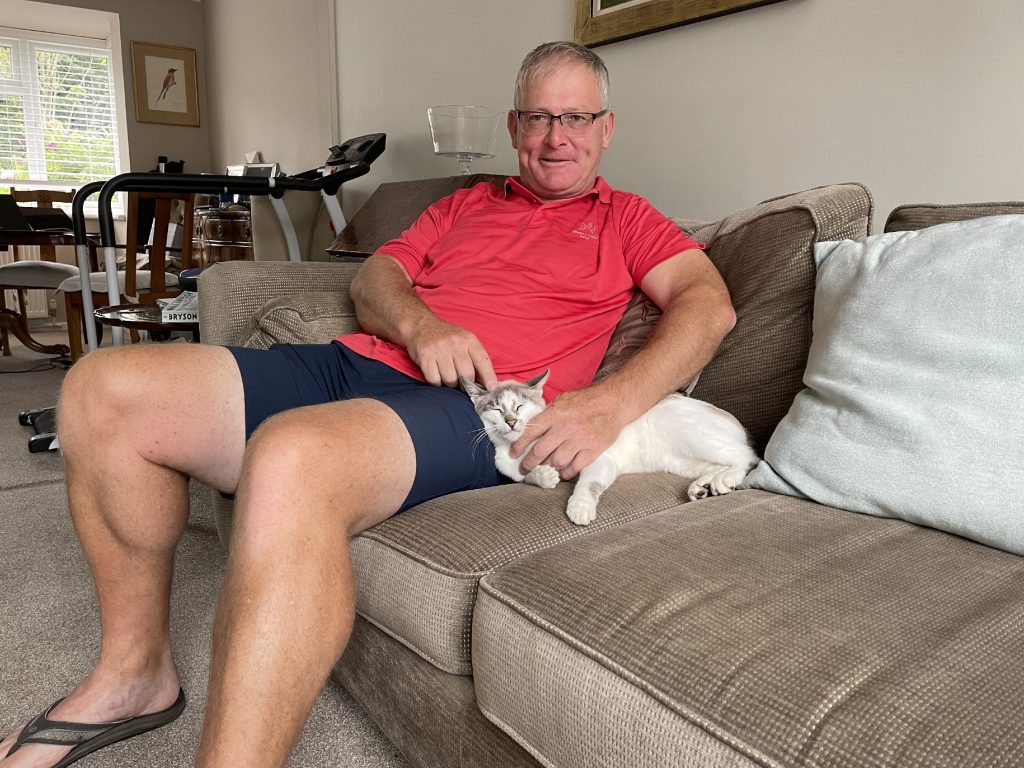 We are, of course, making the most of the house, arriving like university students with bundles of dirty washing. Plumpton is a lovely spot in East Sussex and close enough for us to catch up with friends and family during the week, whilst having quality Pino time.

It’s a lovely UK English summer’s Sunday evening, with the rain hammering down on the sky light as we blog. Pino is snoozing happily on a kitchen chair, surrounded by the washing airing. Plus, after counting our coffers, we are both secure in the knowledge that if times get hard financially, David will be able to takeover that bloody lazy boy’s bread round, as he did after all get up the Hovis Hill on his bike! 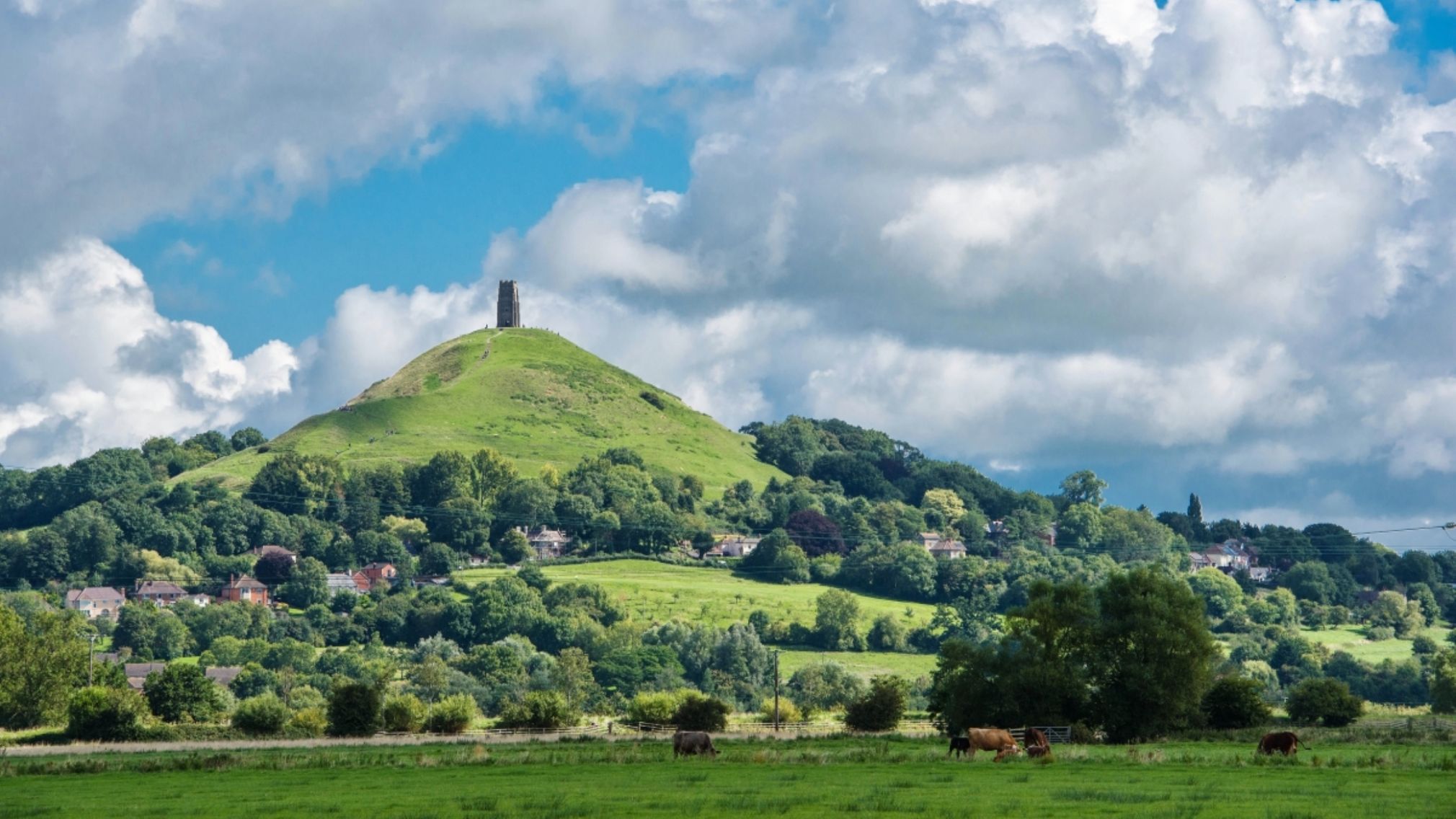 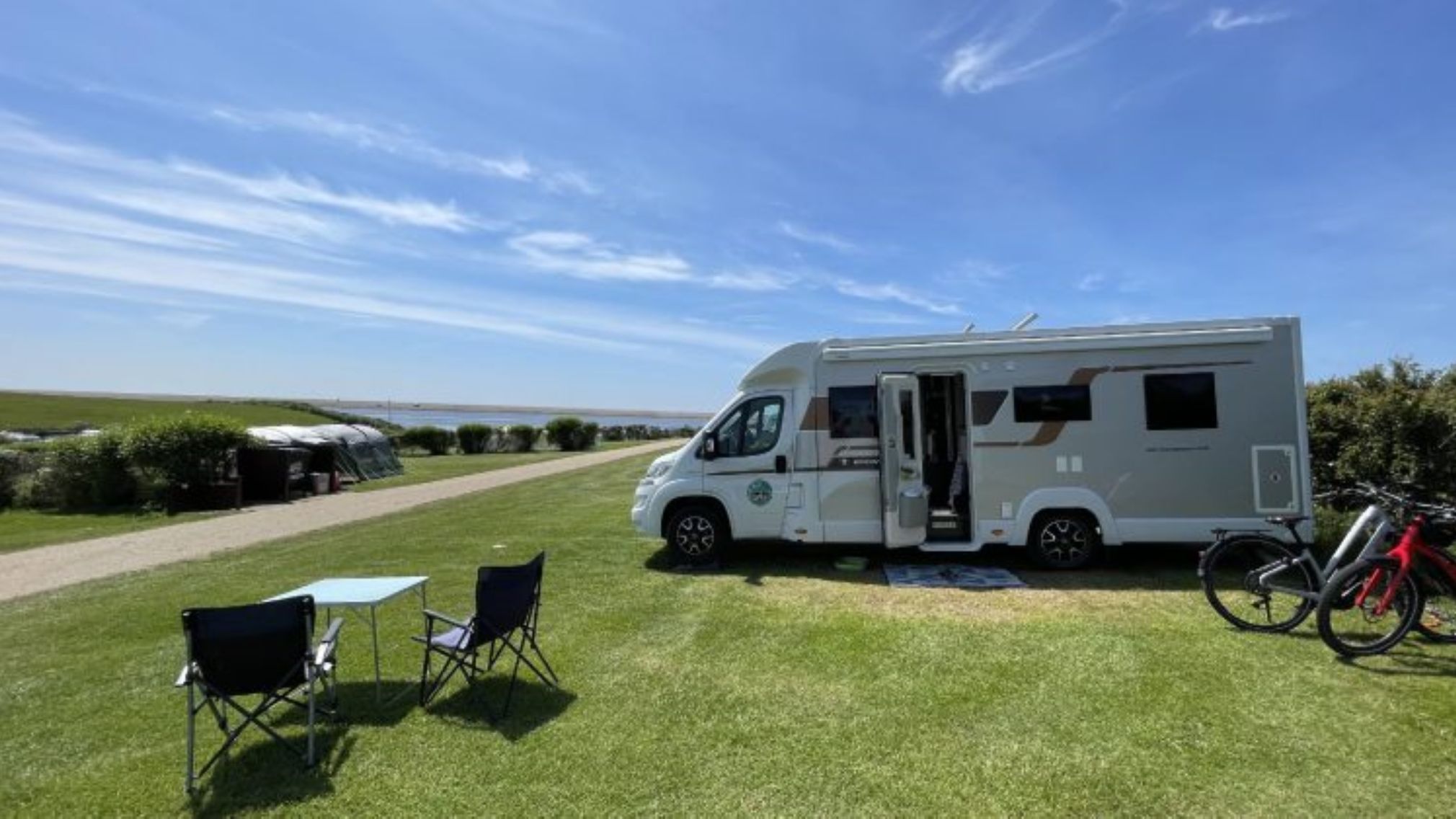 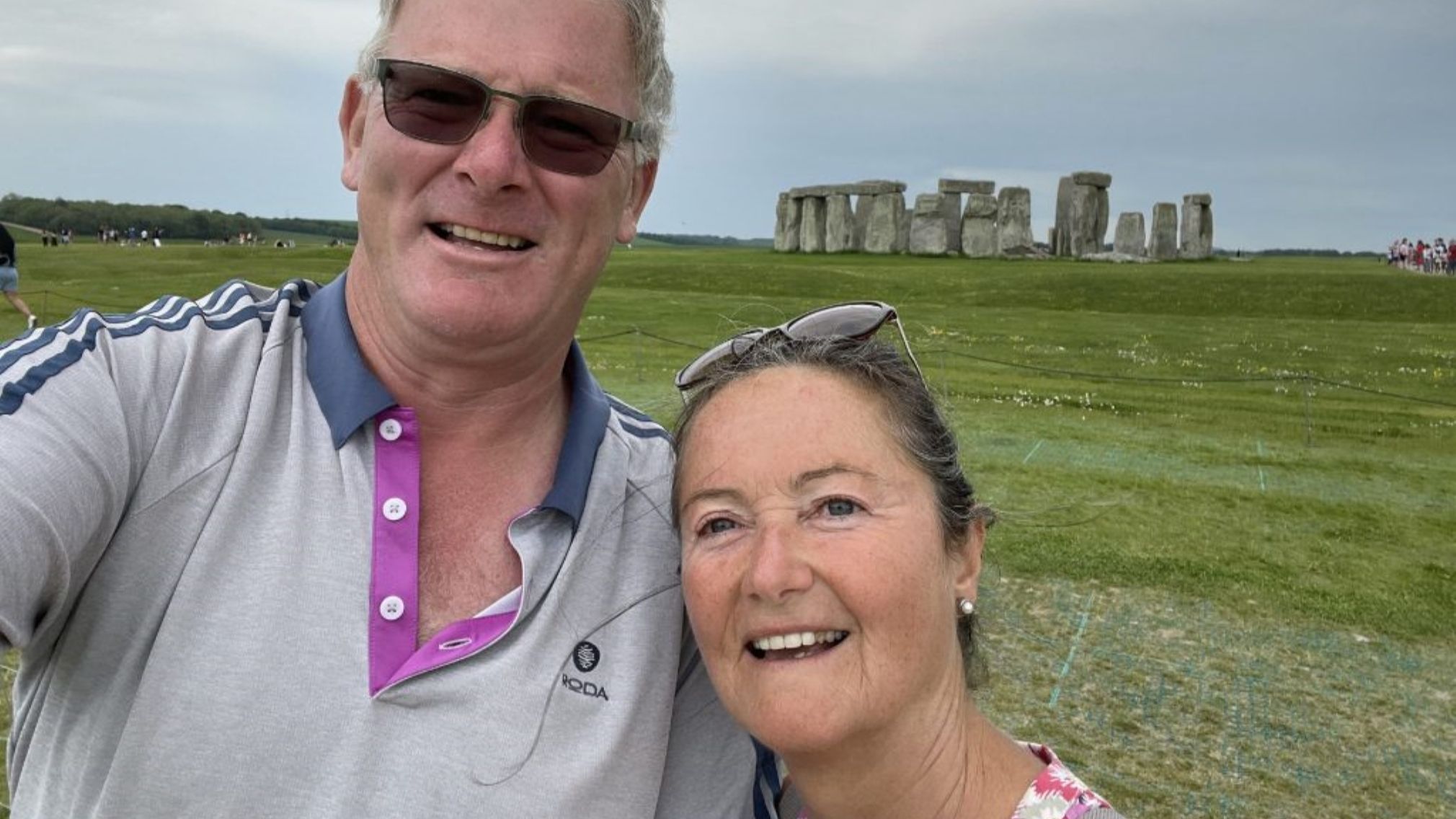