In Love with Italy. It's better second time around in the Elddis Encore motorhome! 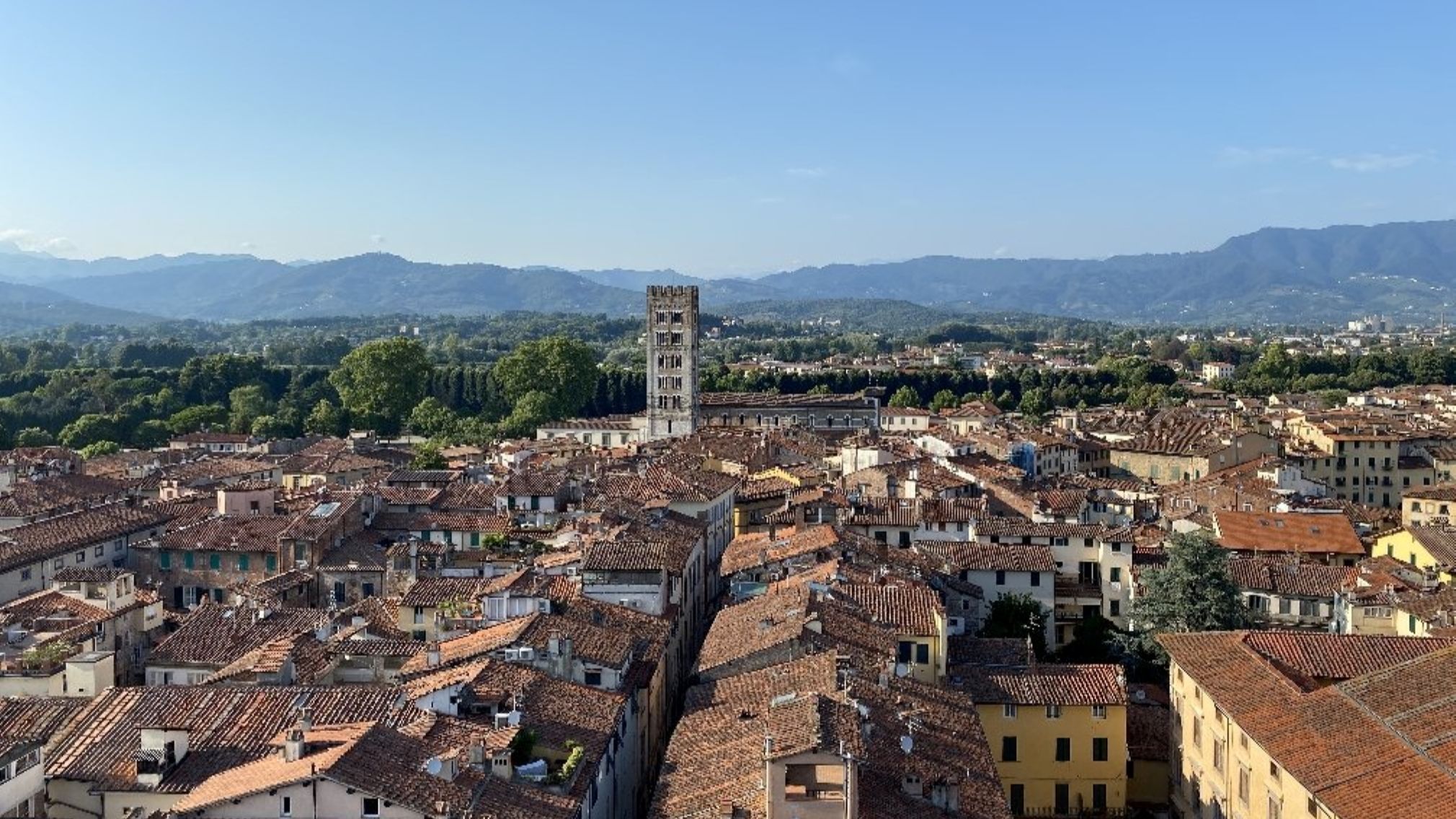 On our previous Elddis Motorhome adventure in 2017 we did not get on with Italy, I don’t really know why? Perhaps it was too early in the year, or that in the South it seemed everyone wanted to rip you off. Or just maybe because we had fallen in love with Spain and Italy was not in the running. But here we are, in 2020, in the midst of the Coronavirus pandemic and Italy is fantastic! So, what has changed?

As you know, we started the week helping our friend Mark set up his new home in Lucca. Last time we bypassed Lucca due to time constraints, and perhaps that was the problem. For the past four years people in-the-know have said that ‘if you missed Lucca you missed Italy’. I get that now, a medieval town that still has its complete city walls from the 17th century that you are able to walk, run or cycle on today says a lot about a place. It has everything: lovely shops, walks, streets, churches and restaurants. I think if we had spent some time here last time Italy would have been competing with our year in Spain. Though a tourist must see, it is a real lived-in town with real people. As we walked around, getting the little things a house needs to become a home for Mark, it revealed its charm and fun side. People who cared and loved their home town wanted to show it off. 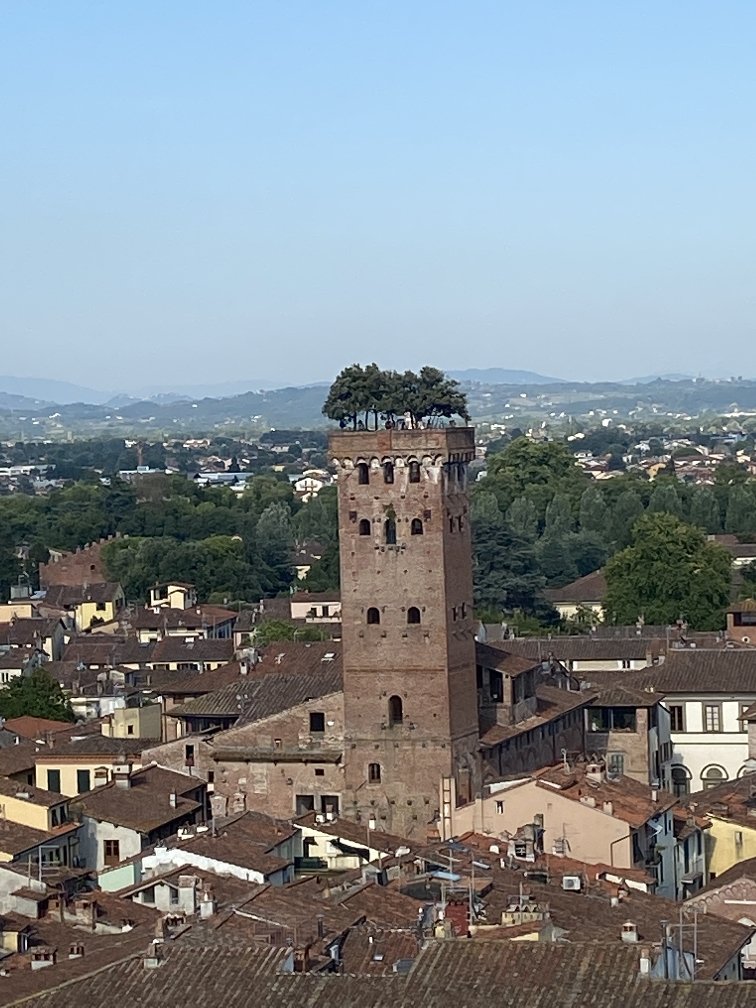 The view of Guinigi Tower 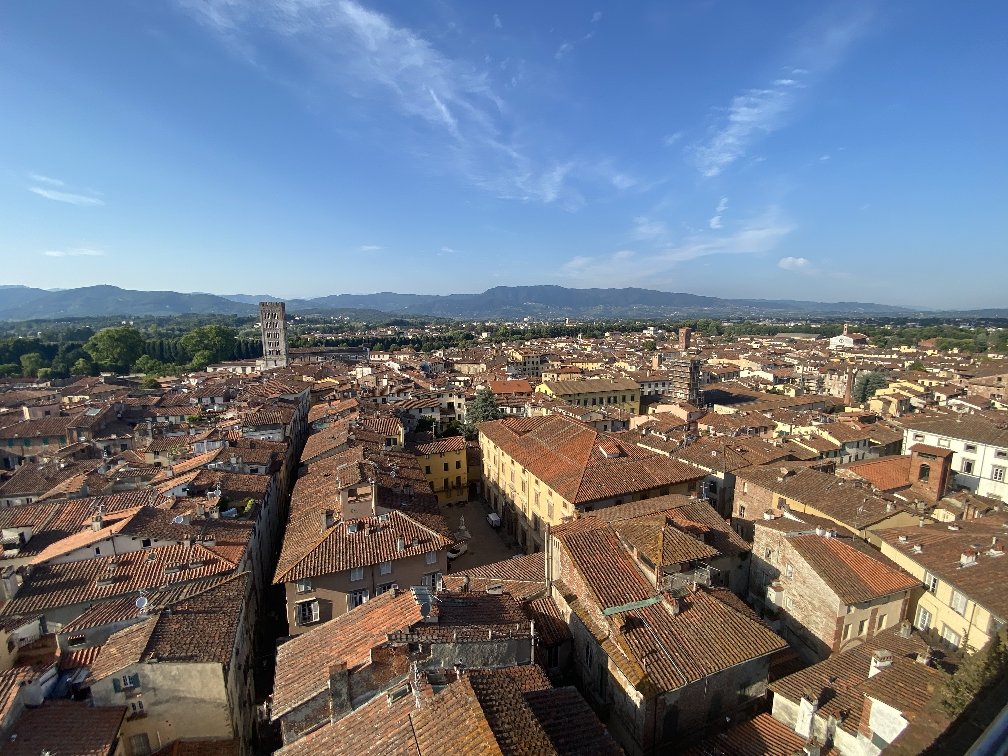 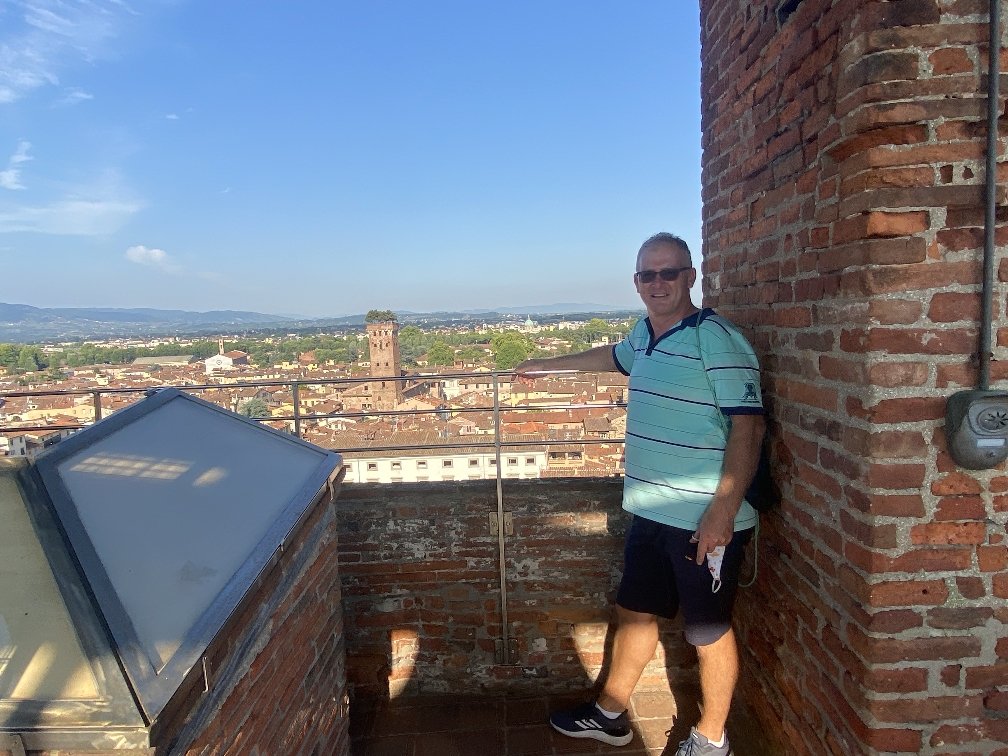 The Guingi Tower in the background 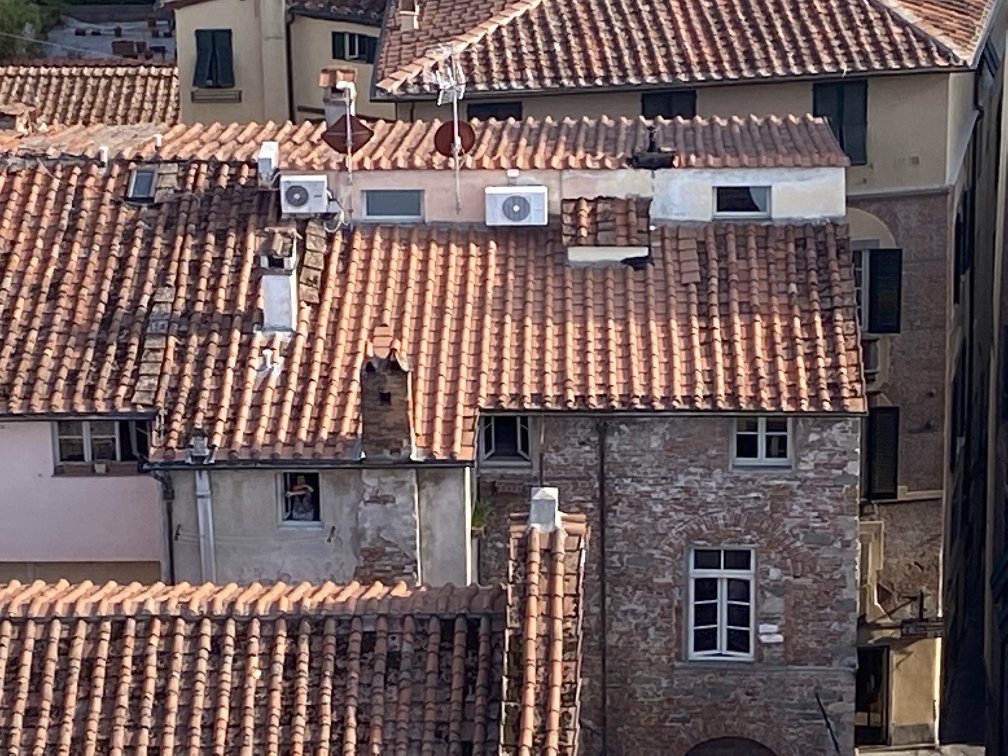 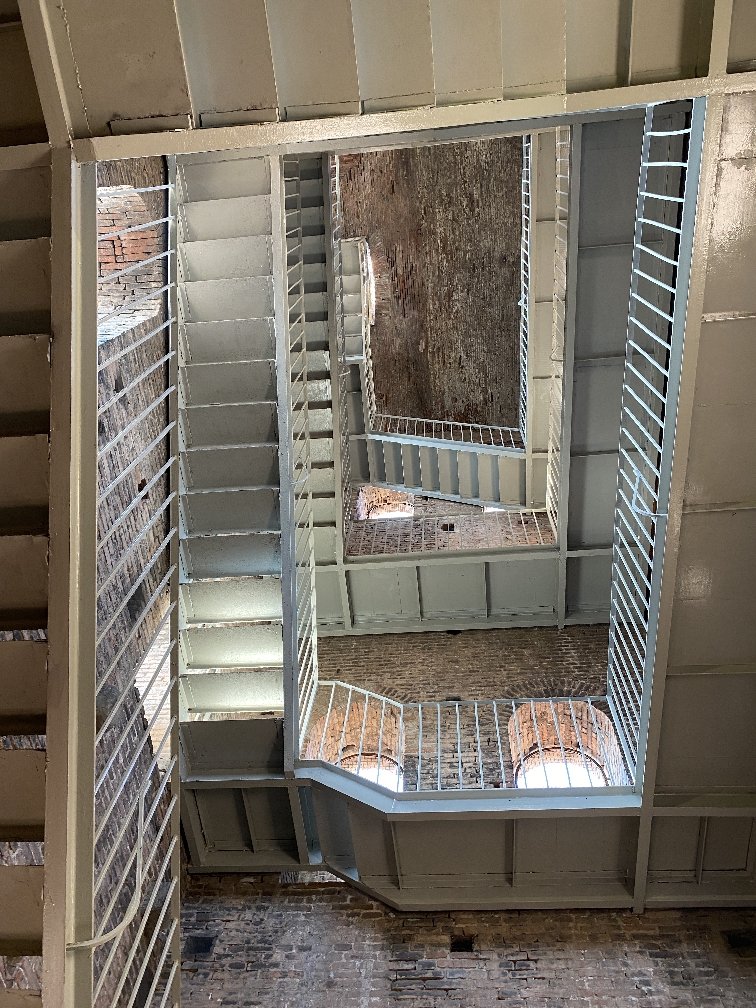 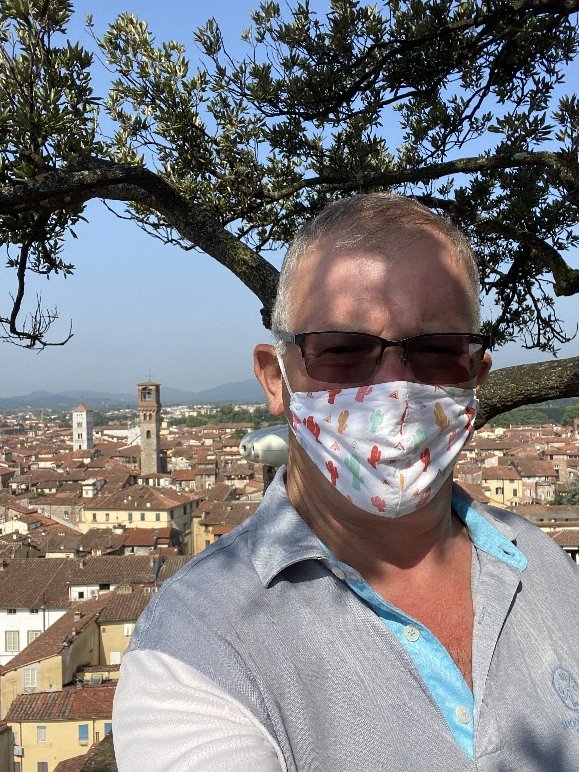 We had to head back to Pisa to visit the leaning tower, as Karen had not been before and when I visited back in the 90s it was a work in progress to stop it falling over. Well, it was magnificent and picture perfect, and with the new normal there were not the usual number of people around, so very accessible. Pisa town is not as bad as some would have you believe, not to be missed would be my rating. On the other hand, Lonely Planet’s rating of the Pizza restaurant was way off, maybe a stared rating means you stop trying. But it was edible and we had things to do and places to see! 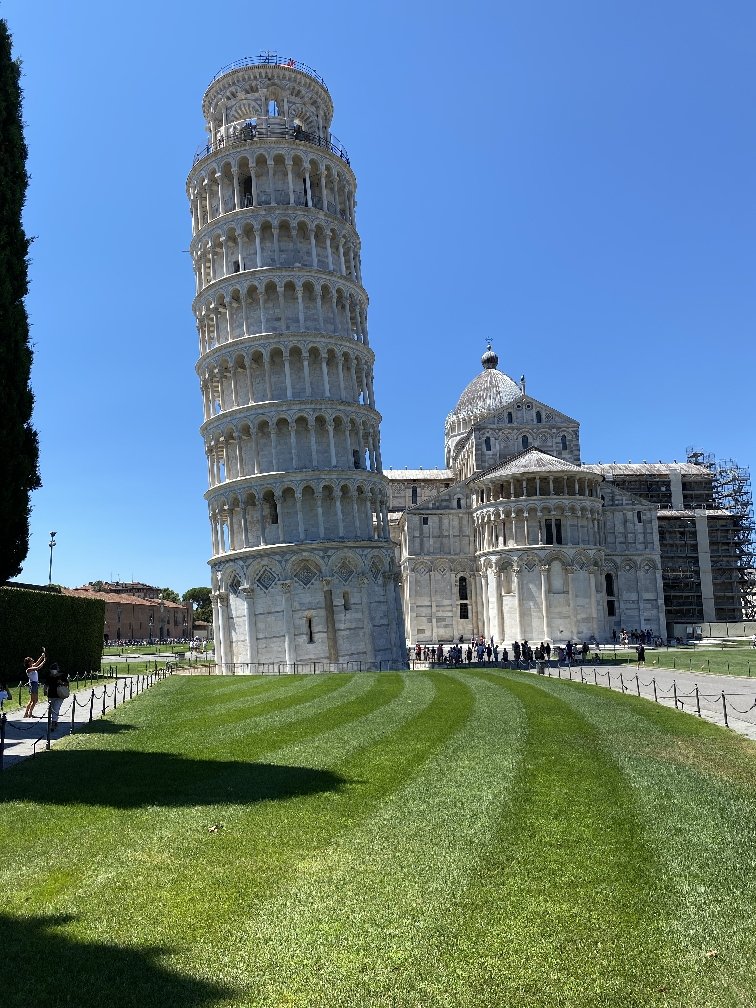 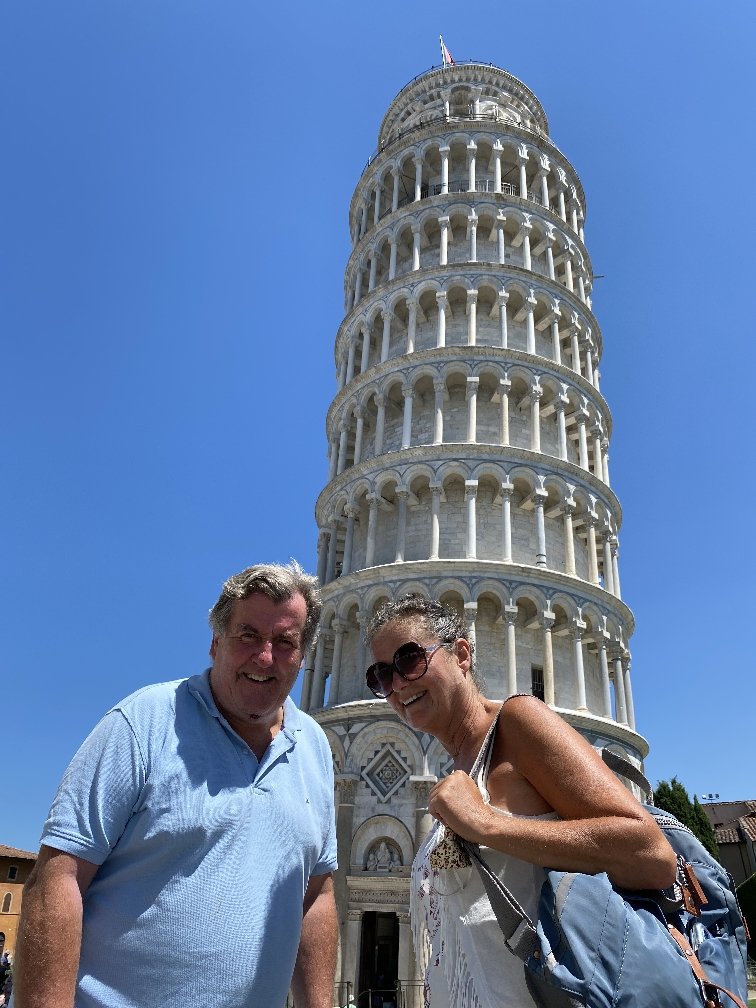 Mark and Karen at the Leaning Tower. 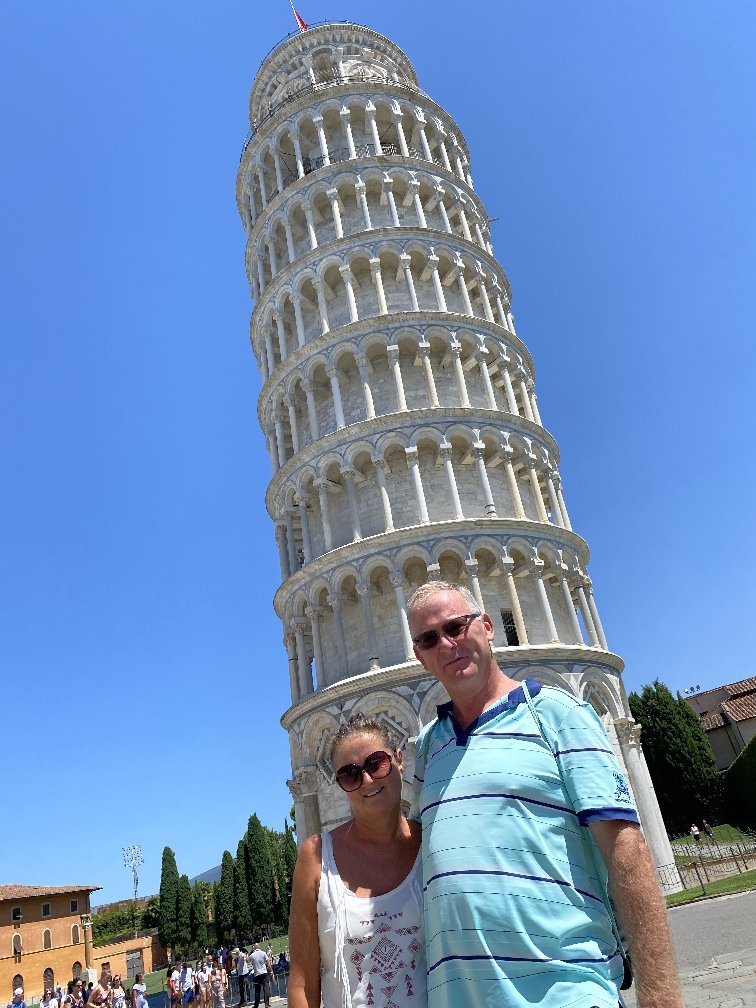 Just to show there were some people around! 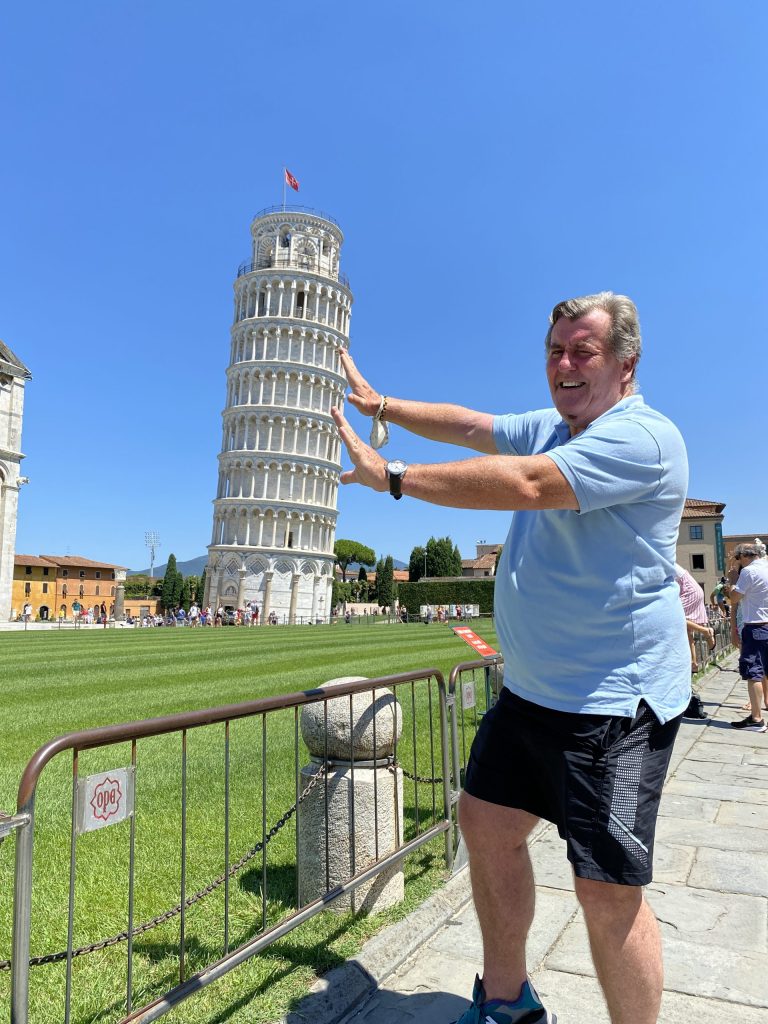 Mark preventing a disaster as usual

One problem that caught up with us was the €63.50 fine for not having taken our toll ticket when we left Florence. We had to wait an Italian hour in the unforgiving heat at the toll office and explain my co-pilot issue. The very nice man at the counter took one look at Mark and understood the issue and the fine was lifted. My only recommendation is to have better co-pilot in future! 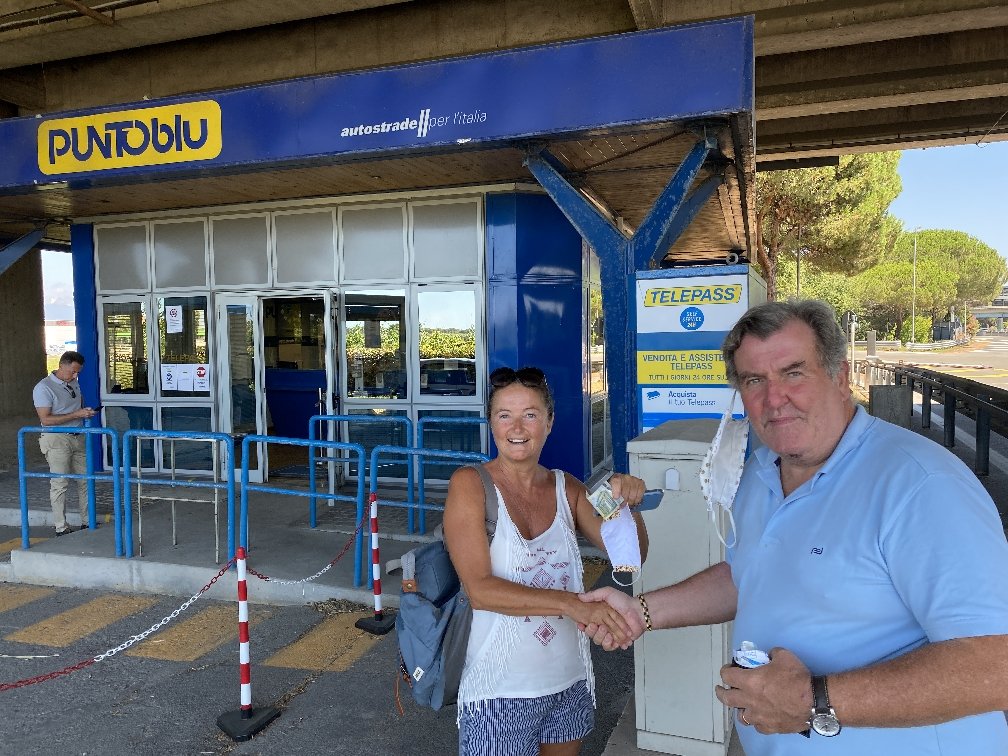 Mark’s penance was to have to go back to Ikea and get a TV stand for the apartment and a few other bits and pieces we had missed the first time. It is hard to believe he had lived his life having never been to a furniture shop, let alone Ikea. Anyway, we finished the shopping squeezed the bits into a Fiat 500 he had rented. As there was no way ‘Buster’ could drive into Lucca drop the stuff back to the apartment! 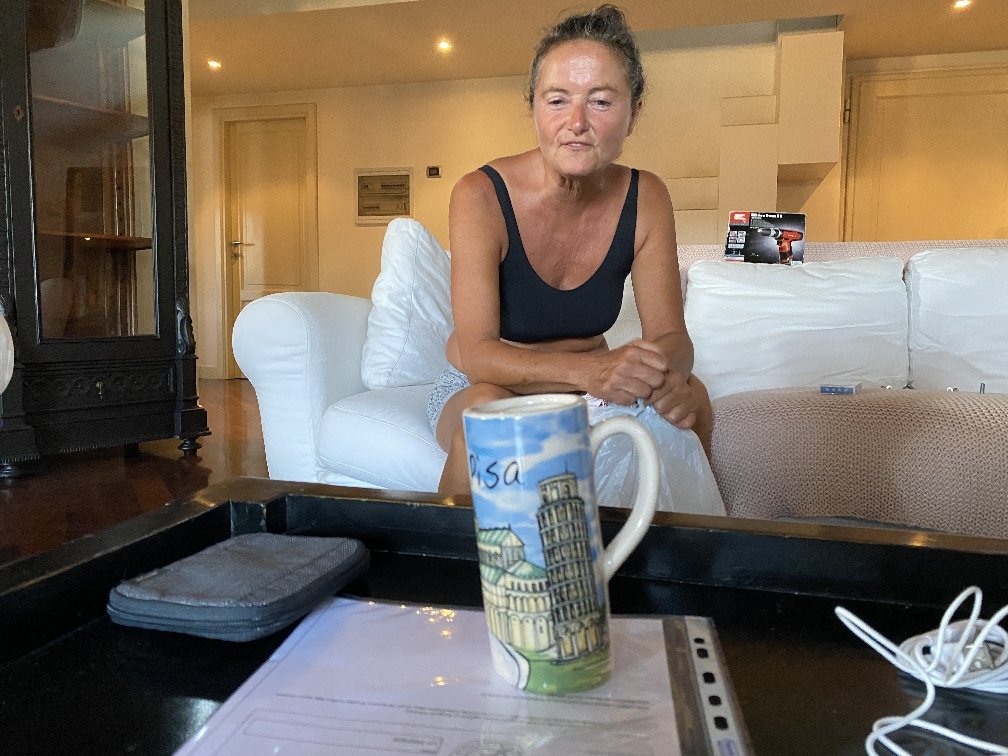 Marks great gift of the leaning mug of Pisa

With Mark’s apartment fit for habitation and he needing his space, the temperature climbing each day, it was time to say goodbye to Mark and head inland to cool down at a ski resort about 2 hours away from Lucca, called Abetone / Val Di Luce. At 1500 metres we were promised two glorious nights of cool sleep. I have not snow skied since 1978 and looking at the Blue (easy) and Red (intermediate) slopes with no snow on them as we walked between the villages, I concluded that skiers are nuts. The easy slopes are 25% slope or less and intermediate up to 40%. I do not know if I could try it again. It was a hard walk with over 30,000 steps, and 101 floors for the day’s walk. 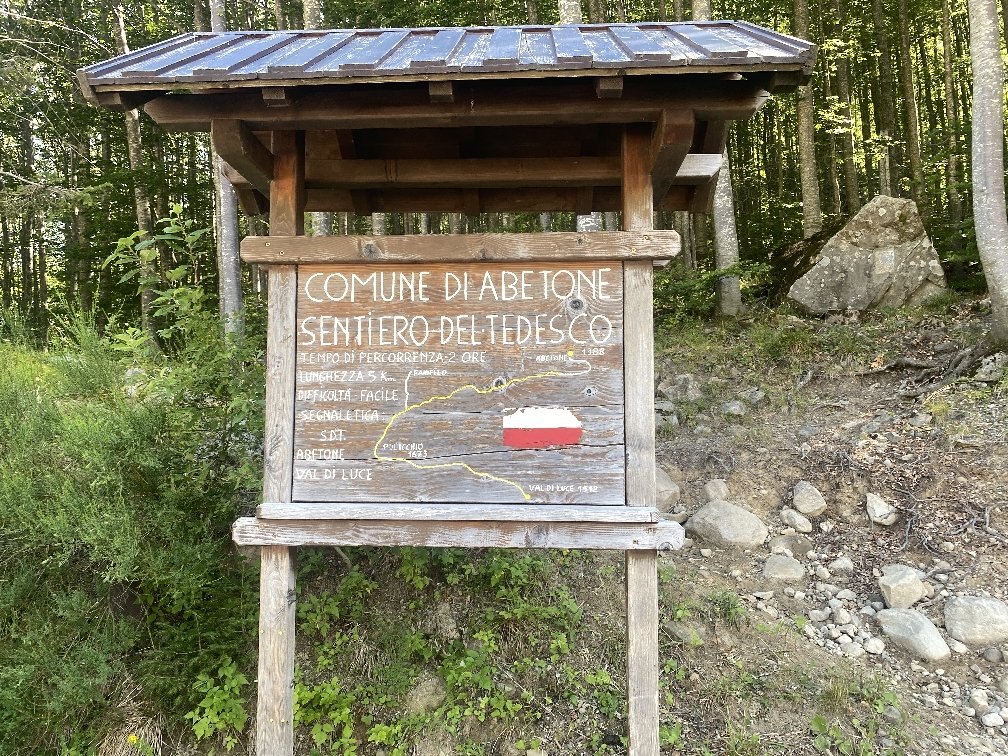 Cool it may have been, but we had to move on. We decided that despite the mad temperatures we had to visit the Cinque Terre and so we set off across the mountains, taking the 50 km route, rather than going back the way we came which amounted to a 150km journey. This was BIG mistake. Essentially it was a single-track road filled with mad Italian drivers who would not take any pity on poor ‘Buster’ and after a number of heated moments we finally made it to the other side. But our day was not nearly over. When we arrived at the Cinque Terre, all the sites were full and the streets crazy and it was near 40 degrees. We pulled over and looked at the map for another stop. We decided on Finale Ligure, a town on the Italian Riviera and a campsite that though expensive has all 5* ratings. This would take us via Genoa, where the main motorway bridge collapsed in August 2018 and, amazingly, the replacement is due to open next month. But as we got close to Genoa the Google maps app told us we could save 38 minutes by diverting through the centre of Genoa. Though Google maps is great, if we have any doubt as to motorhome size restrictions we use another app called Co-Pilot, but it’s not easy to use. In this case we arrived at a roundabout and a sign saying max weight 2.5 tonnes, meaning our 38 minute saving added another two hours to the journey… After 9.5 hours we finally arrived at the campsite and parked up. The price was now €8 extra for August but we were tired and hungry, and it was back to 40 degrees!

We decided to have dinner at the campsite, Frito Misto for me and spaghetti with clams for Karen, both with fresh Italian ingredients and a taste sensation. Happy days! 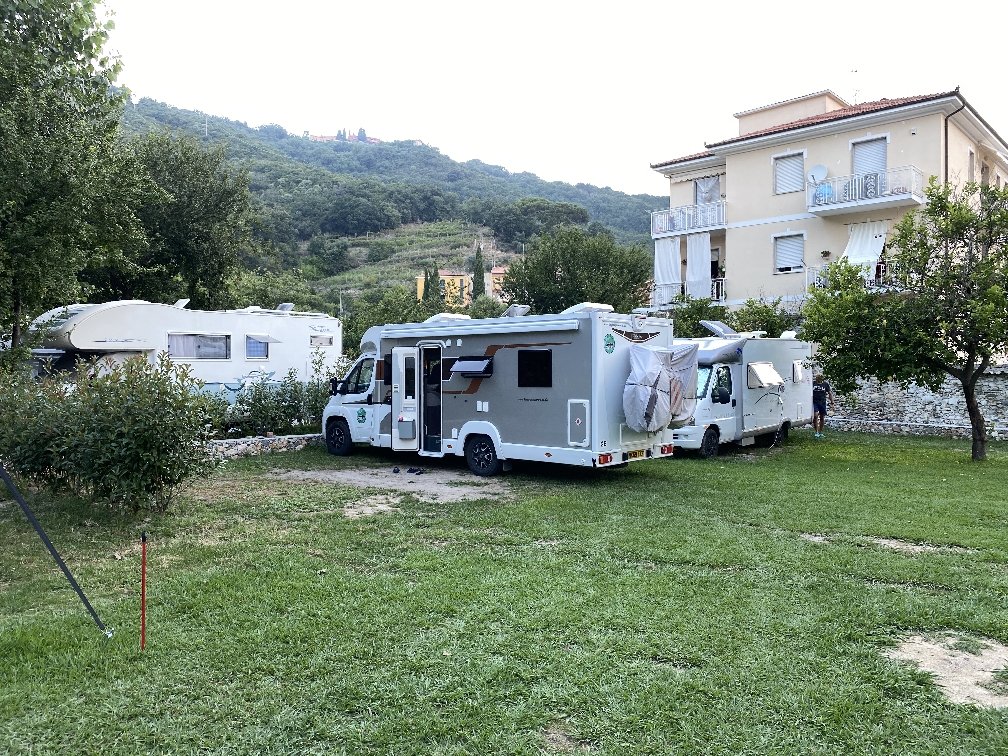 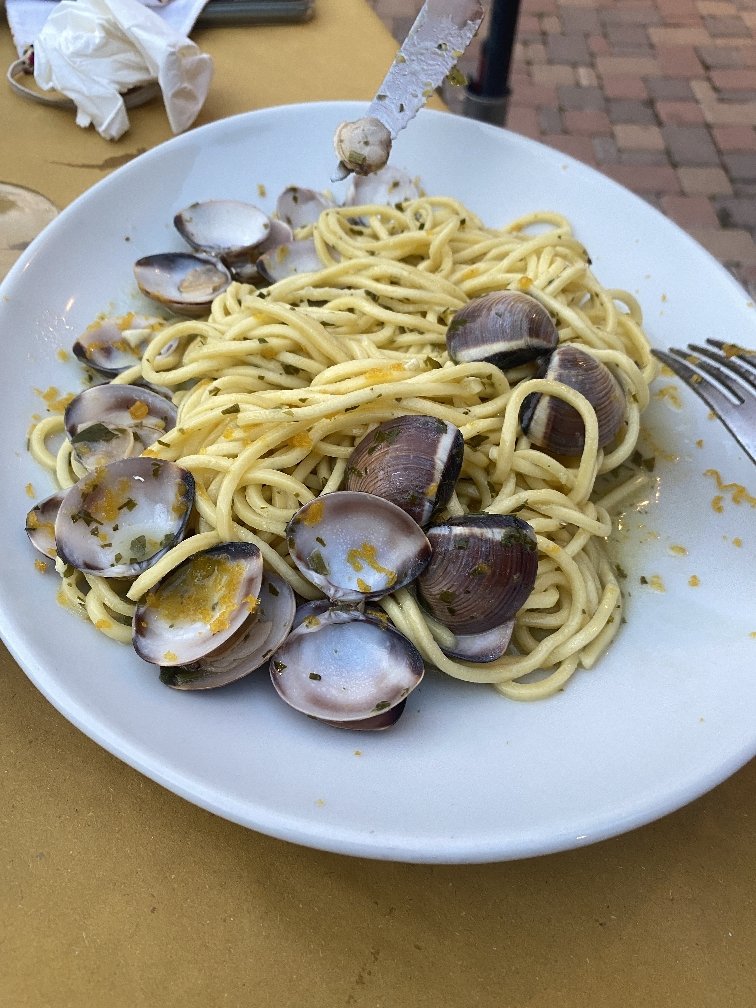 It was still hot, but we cycled along the coast each day averaging 30km each day. You have to love the little kick electric bikes give to your run! 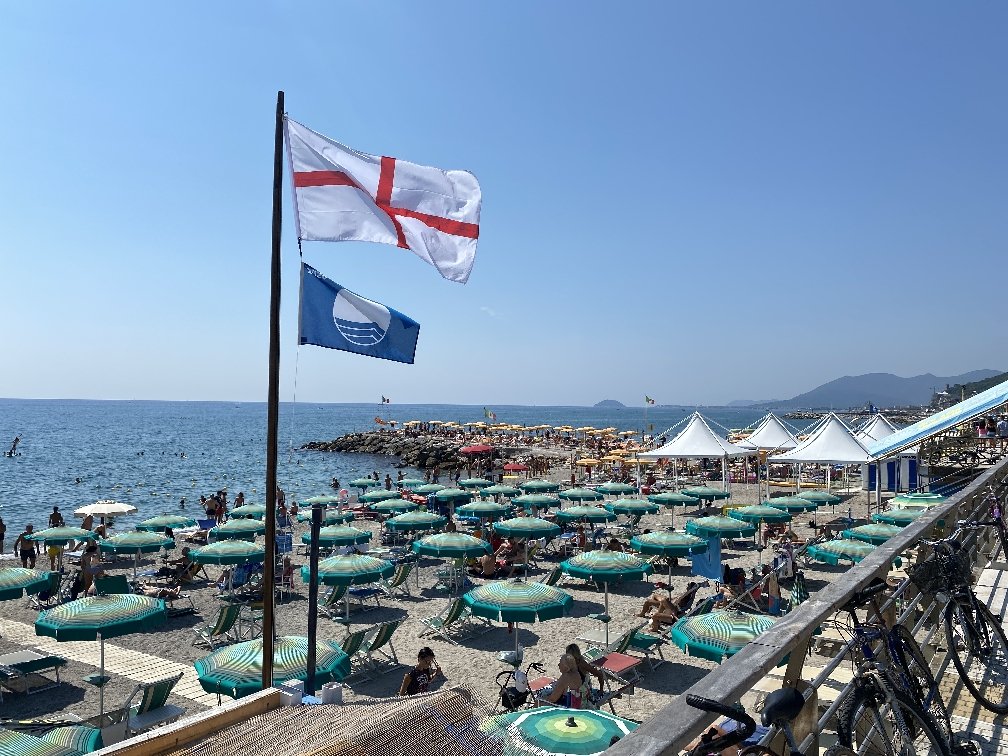 English Beach - you have to pay to stop here

It was our intention to eat in to cut costs given the price of the site, but today I managed to leave the keys of the bikes on a wall outside a coffee shop and added an extra 12km to my day, so I treated us to a meal out at a restaurant I fancied the look of in the town. Well, it was a winner, so if you are coming by you must visit Osteria Grotesque. Great food and service! 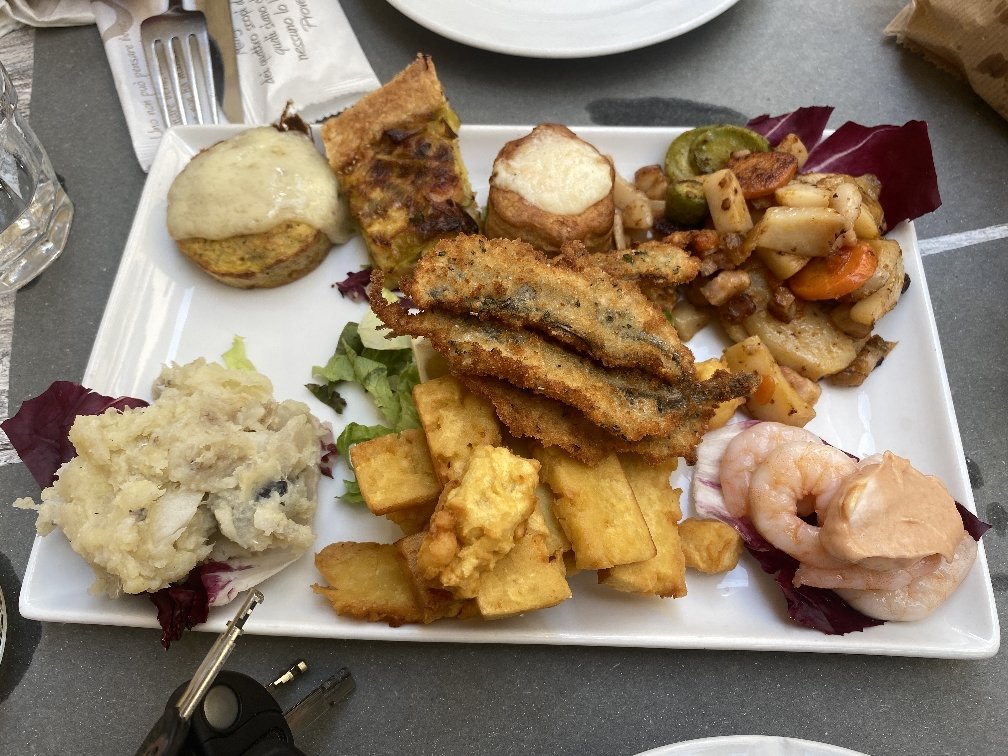 Believe it or not, this is a Starter! 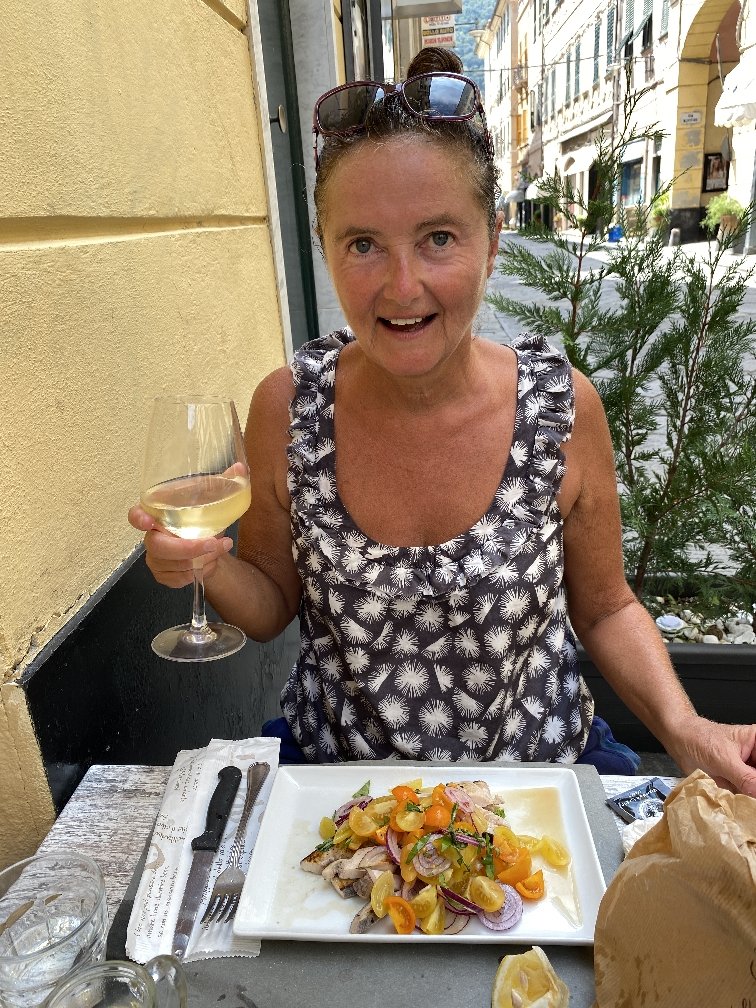 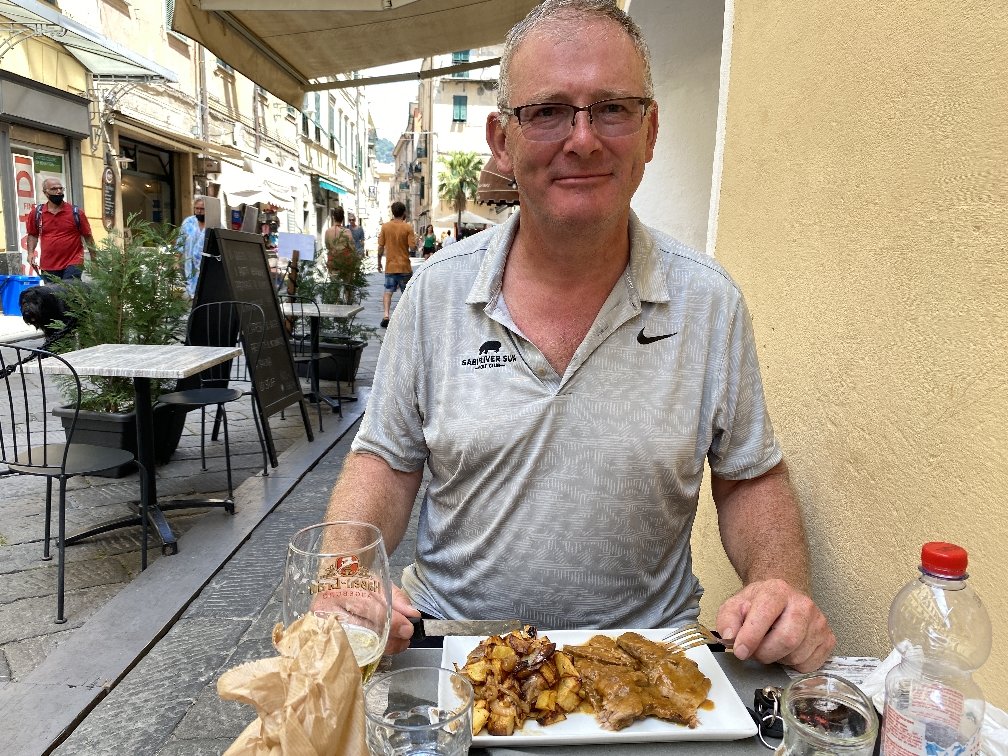 Now with the temperatures soaring all over Europe we will move inland to explore Piedmont. The adventure continues and we hope you can enjoy it with us. 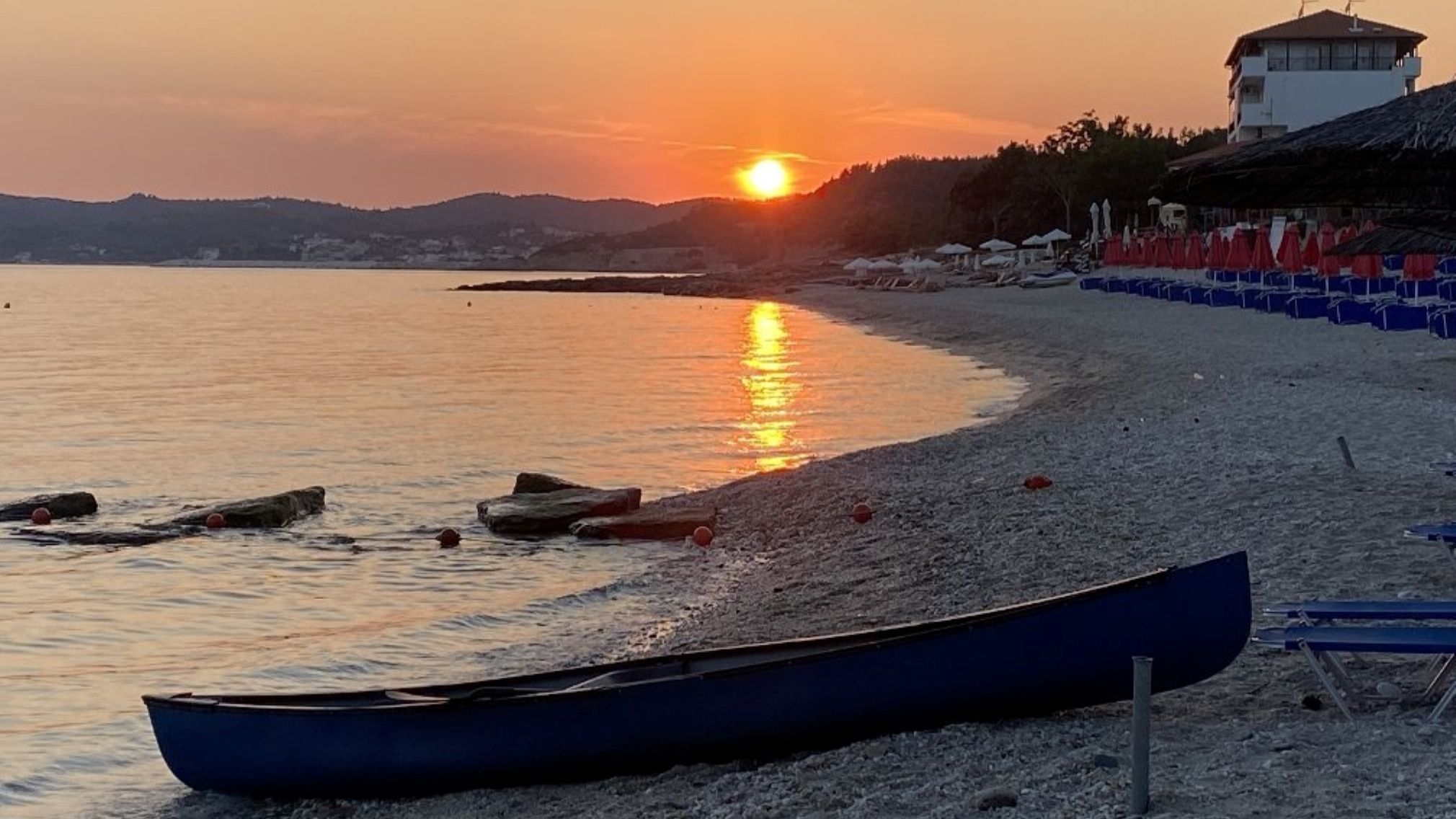 A Postcard from Greece