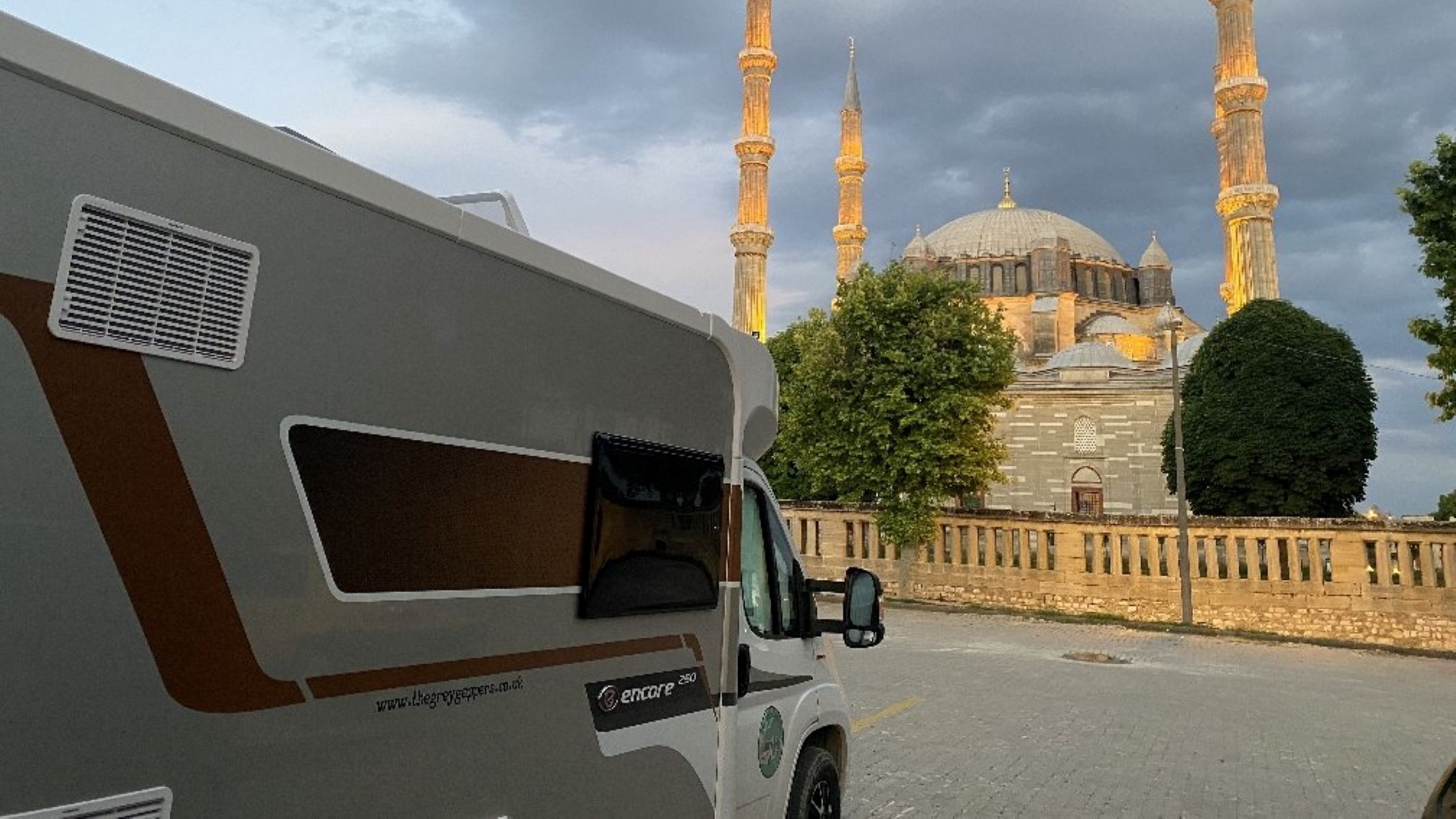 The story so far: Our Elddis Motorhome Bloggers David and Karen – aka The Grey Gappers – set off from the UK in January 2020, with plans to travel to Baku, Azerbaijan. Coronavirus (COVID-19) stopped them in their tracks in Turkey, where they isolated with a group of fellow motorhomers for 10 weeks at Sundance Camp, near Kemer.

As restrictions were relaxed, David and Karen attempted to cross the border into Greece, to no avail. With plans to take the direct route thwarted, the couple instead transited Bulgaria and enjoyed a spontaneous week in Serbia before successfully entering Greece…

“Serbia is a land of contrasts. We’ve been here for only a week and have been able to travel around and see some amazing sights. Added to which, we’ve had rain like you’ve never seen in the UK or Ireland!

“After transiting Bulgaria we arrived at Nis, spending a couple of nights in the town. The people we had met were very friendly and welcoming. Katherine and James, our friends from Sundance Camp, were still with us. After a little planning we headed to the Devils Village, a fascinating place where rainfall has created what looks like human forms with little heads on top. According to local folklore these are the petrified bodies of people who were incestuous relationships! It was damp when we got there, creating an eerie, gloomy atmosphere, butthe close up the monoliths were beautiful.

“There were lots of streams, but they were crystal clear and a few inches deep. They were not so exciting to take a photo of, but by the time we woke up in the morning it had rained so heavily overnight that the rain had caused the river to become a torrent. So, with more than a little trepidation, we headed off down the mountain, the roads awash with water over 6 to 8 inches deep in places and mud everywhere.

“Moving on, we journeyed through the day in the driving rain, aiming to stop at Studenica Monastery - a stunning location, which is said to be the soul of Serbia as it is the resting place of the coffin of the first King of Serbia, along with his mother and father. The monastery was a very tranquil place, very peaceful and extremely beautiful, and we were lucky enough to be shown around by the curator who was able to explain to us some of the meaning of the frescos and the restoration work being performed there.

“We then decided to have cup of coffee and Karen a glass of wine at the café. Oddly, I was unable to have any milk in my coffee as it was the time of fasting for the monks, yet Karen could have her wine! They then told us that we didn’t have to pay as it was gift of the monks, but if we would like to leave a donation it would be appreciated. While we were there the rain stopped, from just as we arrived to just as we left.

“Once again the rain poured down and we made our way across the countryside to find a place to rest for the night, but the rain kept on coming flooding road and fields. We heard later that this was the worst rainstorm in 50 years! We use an app called Park4night to find suitable places. We chose a place in a town called Krajevo, as it had several places to park. Our first attempts were foiled by flooded parking spots and some locals offered us their own driveways to park on! But we were hungry and there was a spot mentioned where we could park at a restaurant, so we stopped there and had a lovely meal. Karen devoured her goulash and I tasted a bit of everything going! The food was hearty and being allowed park for free was helpful. The rain kept pouring.

“The next morning the skies had cleared and we headed towards the west of Serbia and the town of Zlatibor, an agreed spot where we had arranged to meet up again with Katherine and James. As we made our way there, we saw the carnage wrought by the days of rain. Restaurants flooded and ruined fields laid waste, roads washed away. We met a local who took us to see the river in full flow from a road bridge and a dam with is flood gates fully open to let the water through.

“We arrived a day before Katherine and James, as they had got stuck in the mountains during the rains. We found a wonderful camping site called ‘Camping Zip’ near the Tara National Park. We decided to take a little cycle out into the countryside and visit the Park. We peddled and peddled and then found, after 27 kilometres, a small village where we could get a bite to eat and a drink. The sun was now shining, and the temperature was around 28 degrees. The only items on the menu were ‘Buns’, a Serbian speciality, essentially a lump of salty clotted cream in a soft bap and it was very tasty. The park is a brown bear haven and we spent a lot of time looking out for them. Alas, none appeared during our nearly 60 km journey.

“Later that evening Katherine and James showed up and a small part of the ‘Sundance Kids’ were reunited. A few beers and a glass of wine each and we were fully chilled before heading to bed.

“We went out the next day and travelled on the legendary Šargan Eight railway, a narrow-gauge railway that switches back and forth up a an amazing climb. Well worth the £10 for the ticket. We had lunch at the station - simple fare but good value.

“The next day it was my turn to drive and the four of us went back to the park and visited Lake Zaovine, a man-made lake. There was a restaurant nearby which we visited, only to be told the outside area was closed and dogs were not allowed, so it was back for another ‘Bun’ in the little village. After that, another hair-raising short drive to a viewpoint over the Drina river - a truly amazing spectacle. In the background Bosnia, a war-torn only 20 years ago.

“As we then made our way back, we heard from Danny and Lisa, another of the Sundance Camp crew and they were coming to the same campsite. We shared a barbecue and a few drinks. It was such a pleasure to see them again and reminisce about all of our experiences of our Coronavirus lockdown.

“But the Coronavirus keeps waylaying us and we got news that Croatia had imposed a 14 day quarantine on people coming from Serbia, so new plans were hatched. Katherine and James have opted to go to Croatia and rent a house and self-isolate there, but we decided to try and head back through Bulgaria and attempt Greece once more.

“So, with sad hearts we said our goodbyes to our companions of nearly four months, a friendship forged in adversity. We will miss them so much! Danny and Lisa are sticking around for a bit longer in Serbia. Wherever life leads us we look forward to being in their company again soon.

“Tonight, we are parked in Nis, where we had stayed with Katherine and James only a week ago and went back to the restaurant where we’d eaten with them. The virus may have changed the world, but we are sure that new friendships have been made that will be longer lasting than any pain that the virus has brought.

“Coronavirus has changed the world. Everyday day something new happens and things change. One day you’re allowed into a country, the next day you are not - or face 14 days isolation. You can’t prepare for this, you can’t plan, but you keep going in the hope that it all works out.

“Our week in Serbia has been a real surprise, a lovely country, very friendly people, even if the only haircut available for men seems to be a buzz cut! The food is very meaty, which suits me fine, but Karen misses Mediterranean food, so Greece would really suit her - and me to be honest!

“Tomorrow we will drive through Bulgaria again and attempt to enter Greece. We plan to stay near Thasos, a place that has deep meaning within Karen’s heart. Who knows what will happen … But we will let you know!” 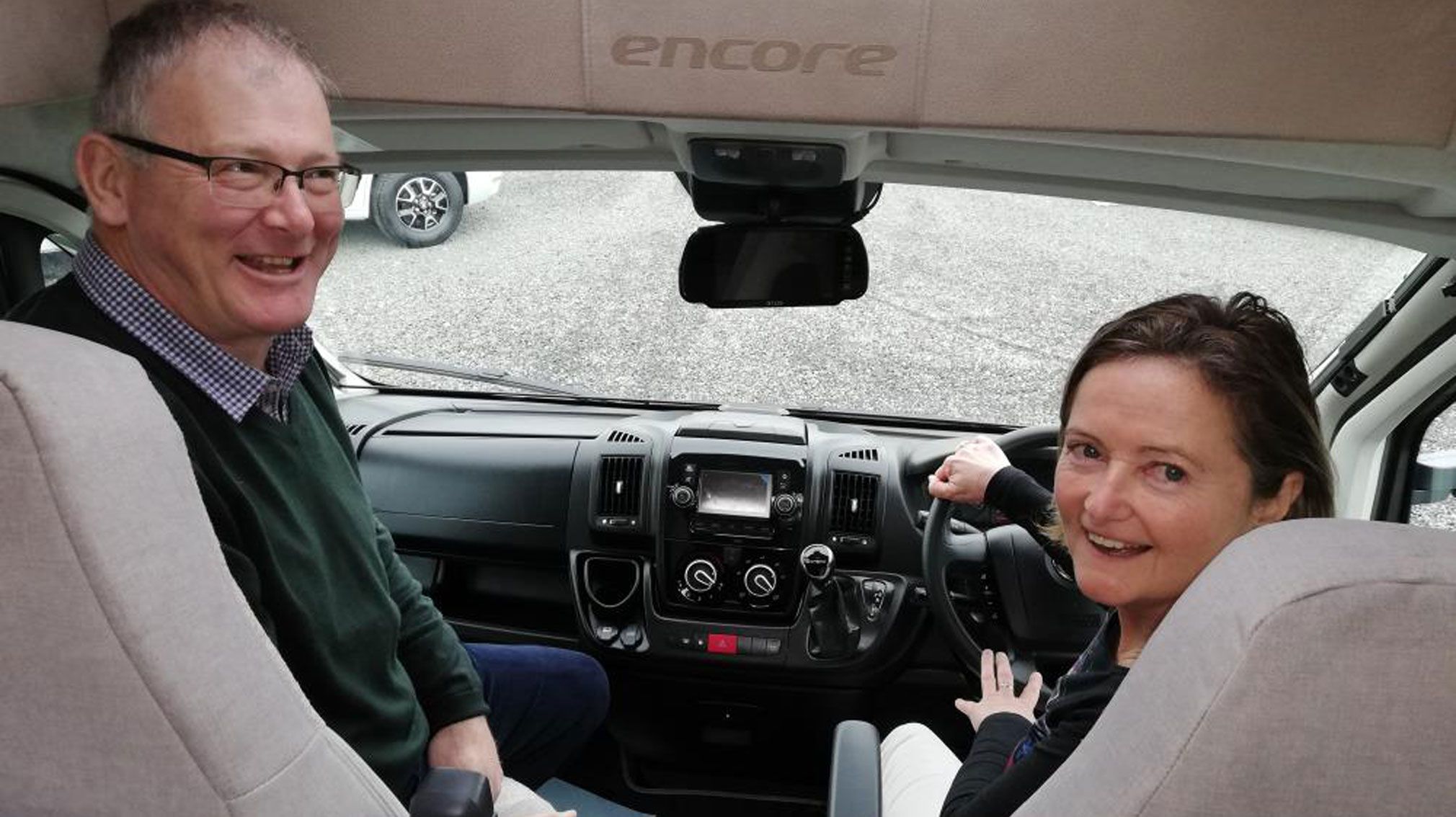 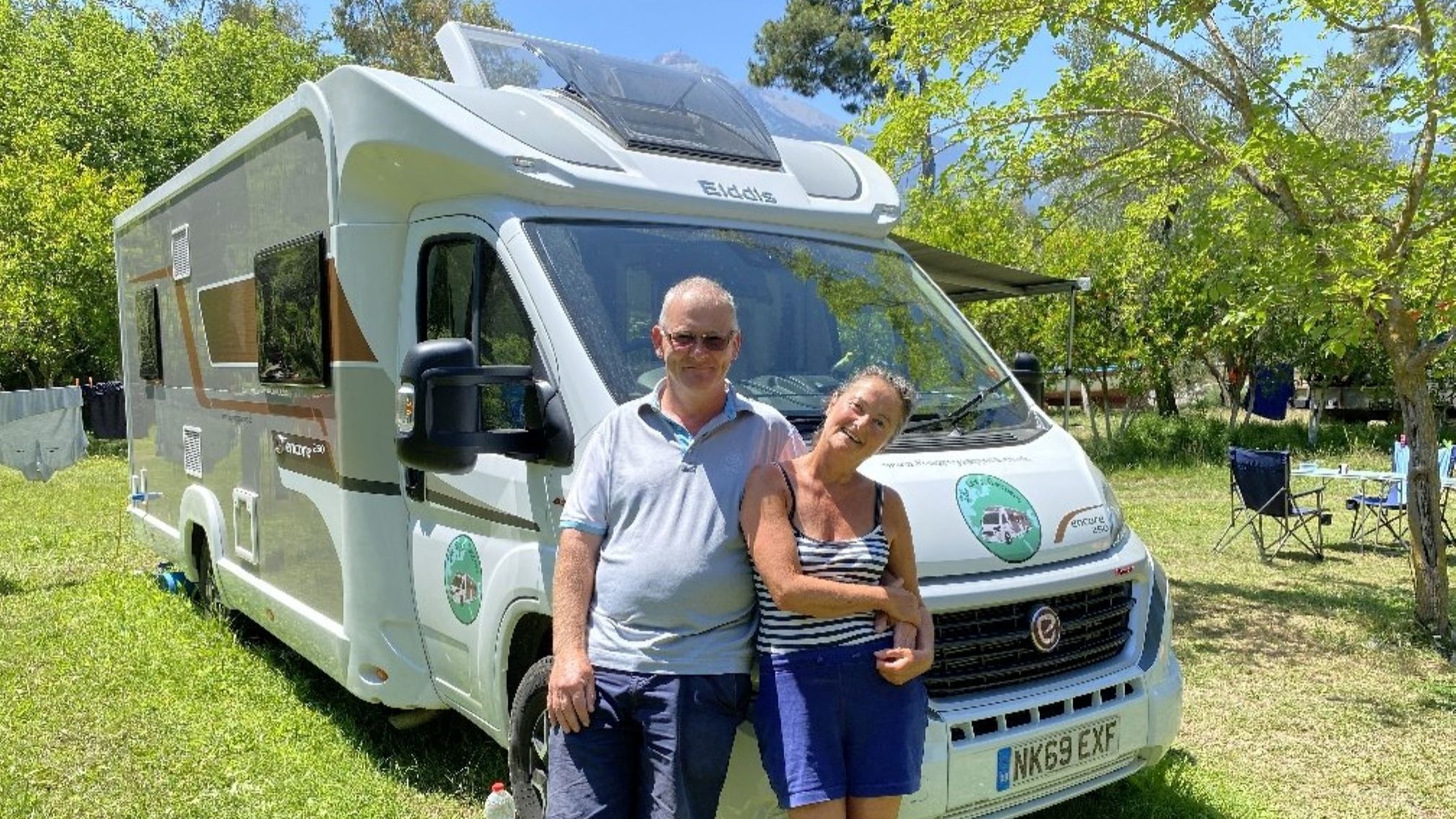 The heat is on … 9 weeks into Motorhome Lockdown in Turkey and it’s 38 degrees in the shade! 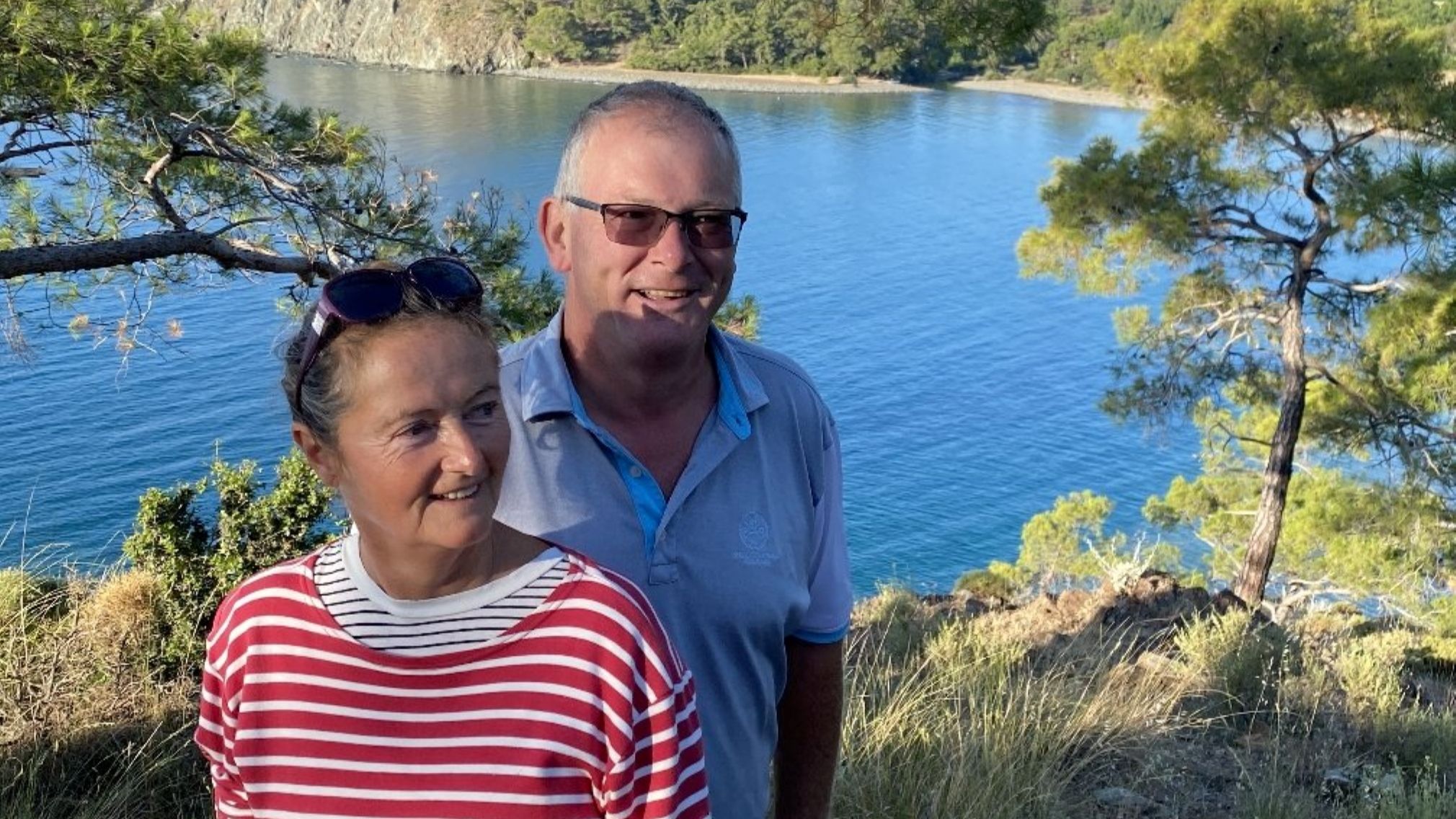