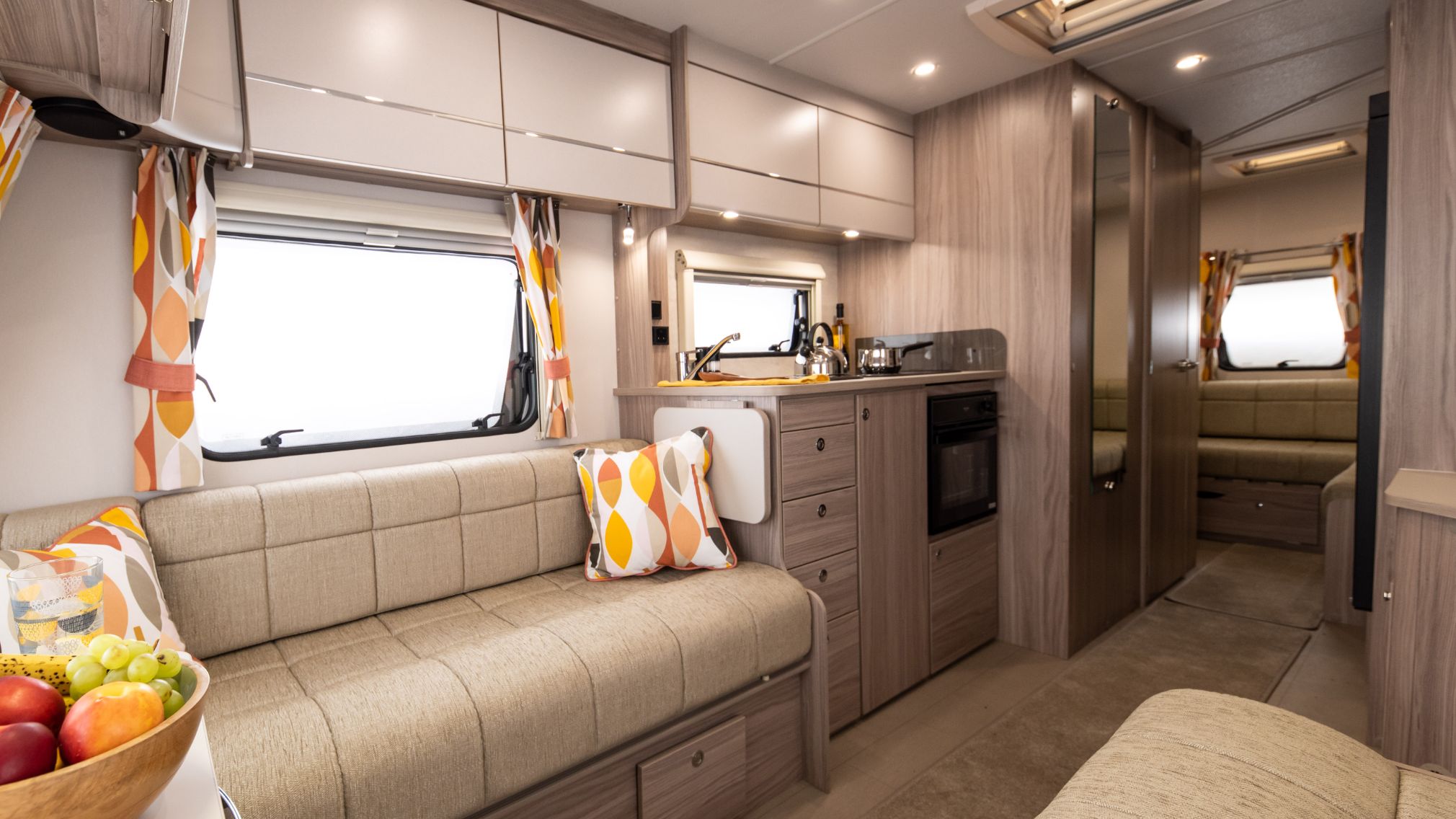 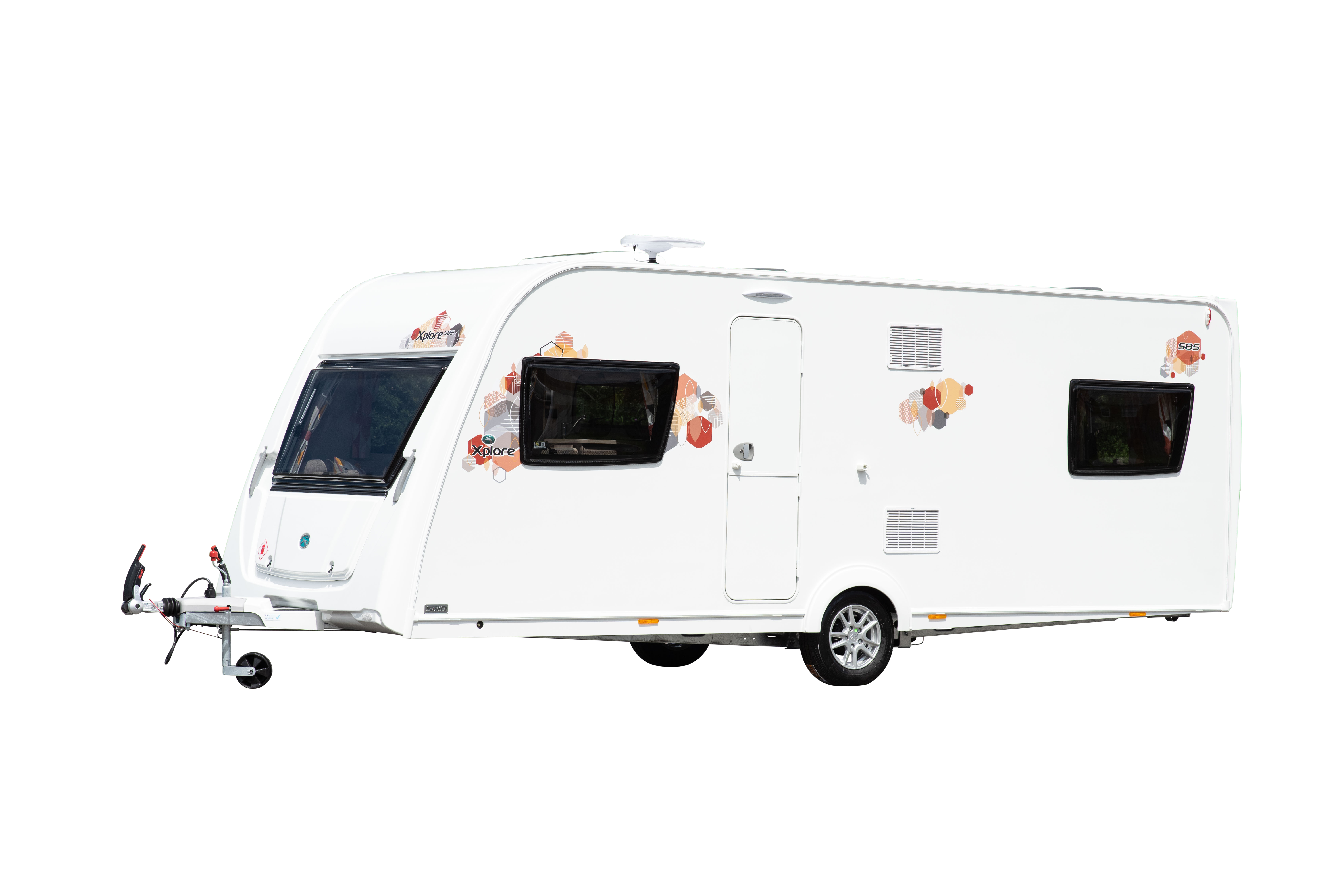 The Xplore range has been a leading light in the lightweight tourer arena for more than a decade. Family layouts have been a strong element of this range since it was first unveiled in 2008.

Now, for 2022, the range gets a newcomer, with a layout unique to the manufacturer, the County Durham-based arm of the giant Erwin Hymer Group.

The five-berth Xplore 585 has an intriguing and brilliantly designed rear L-shaped area; it’s a bedroom for three, and also a dining/playroom. Close to this area is the shower and toilet room.

Effectively, the 585’s layout is divided into two sections; the rear L-shaped seating feels quite separate from the kitchen and parallel front seating, with the showering/washing arrangements in the centre. We can see this working really well for families; kids like to feel that they have their own space! 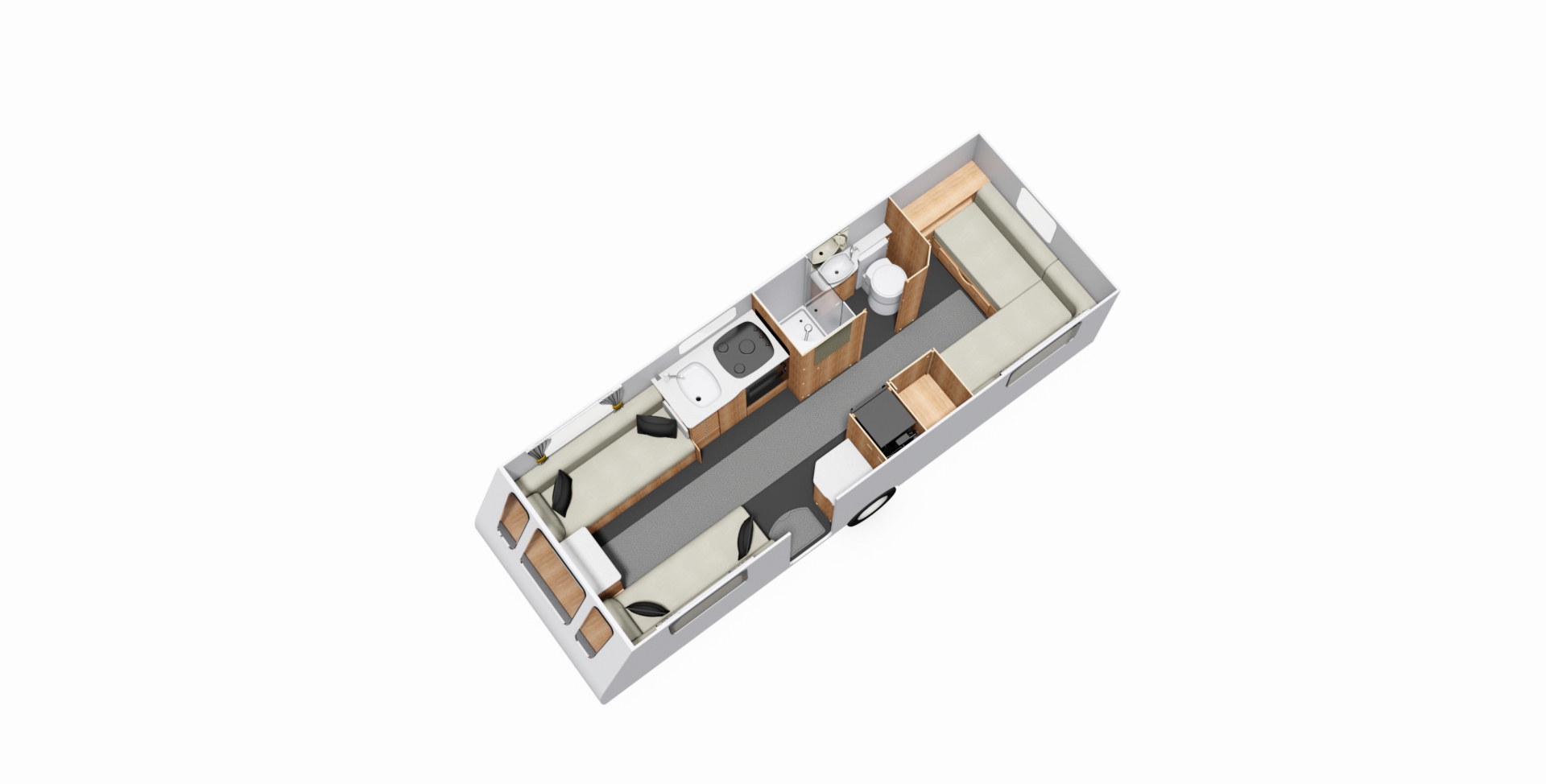 This new star of caravan layout is also available in the Erwin Hymer Group’s Elddis Avanté and Compass Casita ranges. The key difference between the Xplore version of this layout and the Avanté and Casita variants is width. Xplores are 2.18m wide; the sister models in the Avanté and Casita ranges are 8cm wider. It would be easy to automatically assume that the wider versions would be more appealing. Actually, though, because the corridor leading past the shower room to the rear seating area is slightly narrower, the kids’ zone in the Xplore feels a little more separated from the rest of the caravan than in the wider models.

The Xplore 585 has an MTPLM that is 85kg heavier than the Elddis Avante and Compass Casita versions, so if you are watching the weight for towcar matching, the Xplore may be your preference.

There are differences in equipment, too. Avantés and Casitas have Al-Ko’s ATC stability control system. They have dual-fuel hobs, with a mains hotplate together with three gas burners, and a separate oven and grill, plus a microwave. Xplores have three-burner hobs and combination oven-grills but no microwave (although you can plump for a microwave as an option).

Those differences go some way to account for the difference in weight, along with the width. Xplore 585s have a single strip of carpet running the length of the caravan, whereas Avantés and Casitas have fitted carpets. Yes, these models feel arguably cosier – but the Xplore’s simple carpet enhances this caravan’s super modern appeal.

And the difference between the Avanté 585 and the Casita 585? Purely cosmetic. These ranges share sizes, weights and prices, and are distinguished by different woodwork, fabrics and graphics that create the different characters. 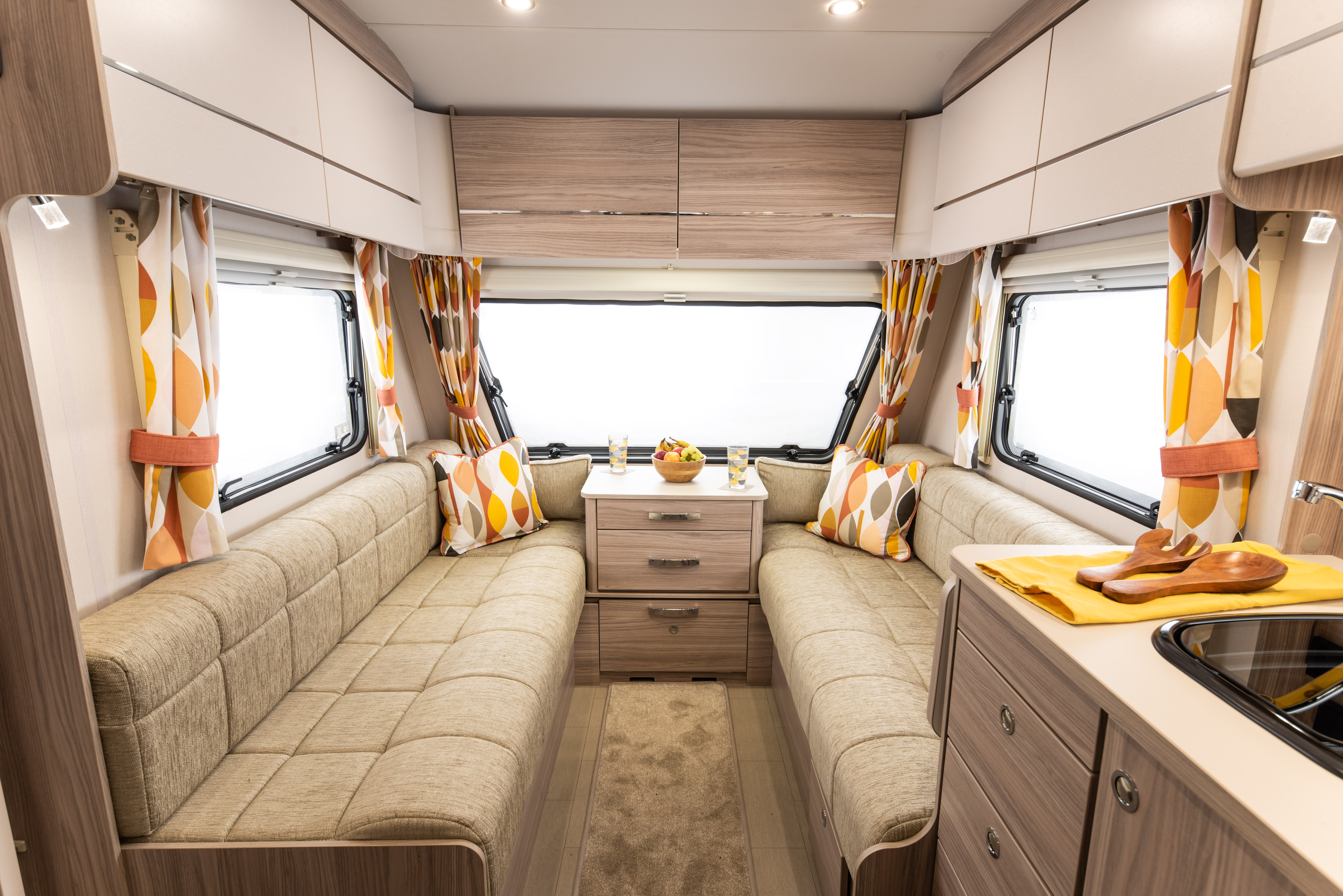 Xplores have an outstanding décor scheme for 2022. We love the zingy curtain and cushion colours, elliptical shapes of bright yellow, apricot and terracotta with a bit of black and white, plus even pale pink finds its way into this delightful melange of colours.

The distinctive oval pattern in the curtains and cushions is slightly reminiscent of Orla Kiely patterns of strong colours and elliptical shapes. Stunning! Similar colours on the exterior ensure Xplores will turn heads on the road and on campsites; graphics are an array of geometric shapes in terracotta, apricot and grey. Beautiful pale cabinetry enhances the bright modern aspect of the 585.

The colours will grab your attention initially but it’s the 585’s unique rear layout that will win you over, especially when you realise how easily it converts to a bed area. You can make a double bed by pulling out the base of the settee at the rear of the caravan, and a bunk folds down from the nearside wall. Or you can use the settee as a single bed, with or without the bunk above it. It’s a cleverly designed, versatile configuration and it creates a cosy little enclave. 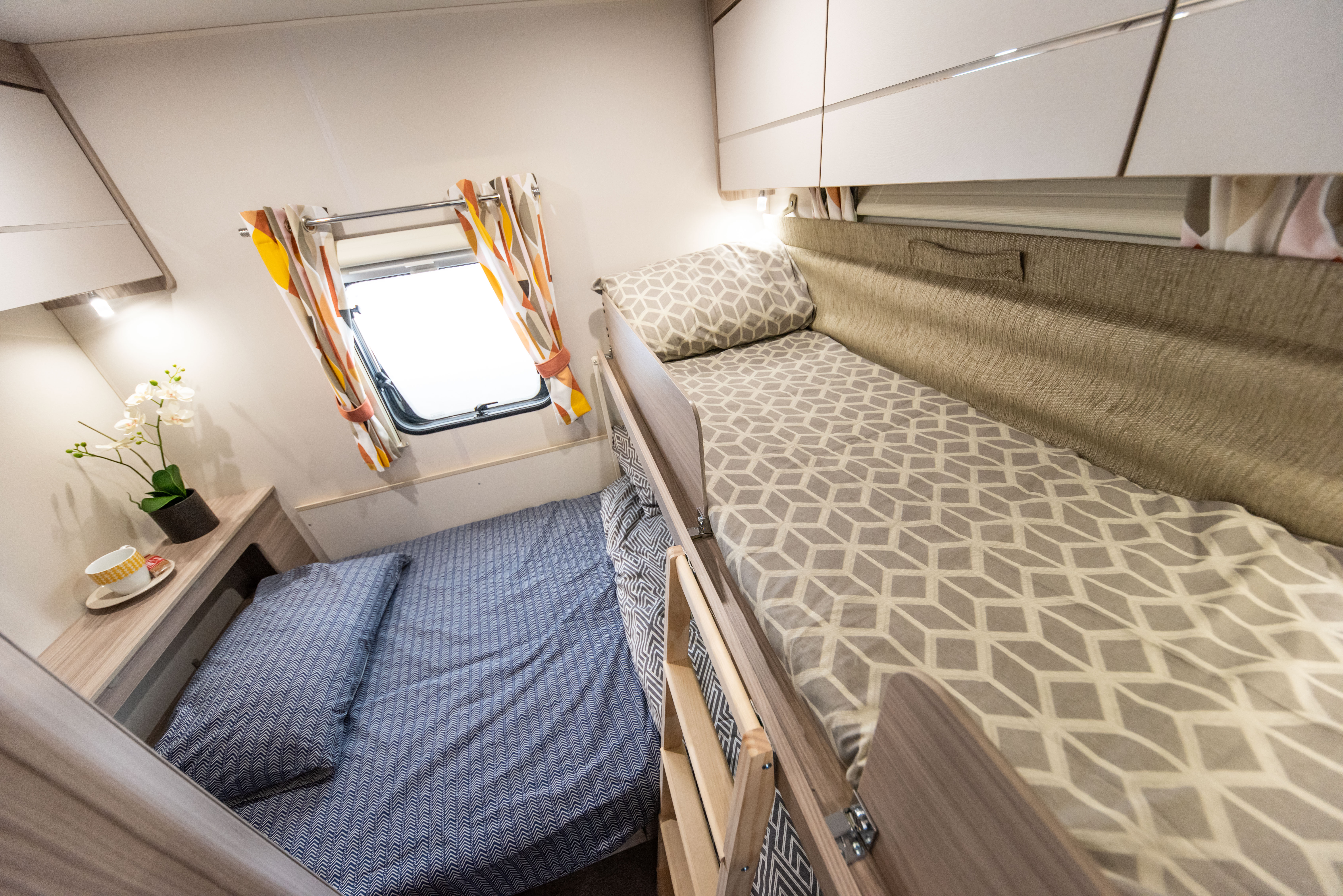 In daytime mode, this area has some nice tricks up its sleeve. The shelf on the offside is equipped with a power point, television connections and a circular aperture so that you can feed cables neatly from the lower shelf to the top, where you’d put a television. A small drop-down door leads to a storage area beneath the shelving. Another drop-down door, much larger, gives you access to the area under the rear seat.

The nearside seat base is easy to raise (it’s on spring hinges) to get to the area beneath. Two top lockers on one side and three on the other take care of a lot of clothes.

The wardrobe, with four drawers beneath it, sits opposite the shower room, in the corridor leading from the rear area. In total, the storage in this area of the 585 is generous.

Three small spotlights and two larger, ceiling-mounted spotlights take care of illumination neatly. A window both at the rear and side allows plenty of daylight to enter; this was noticeable even on the dull day of our review. A curtain draws across the corridor to restrict light at night. 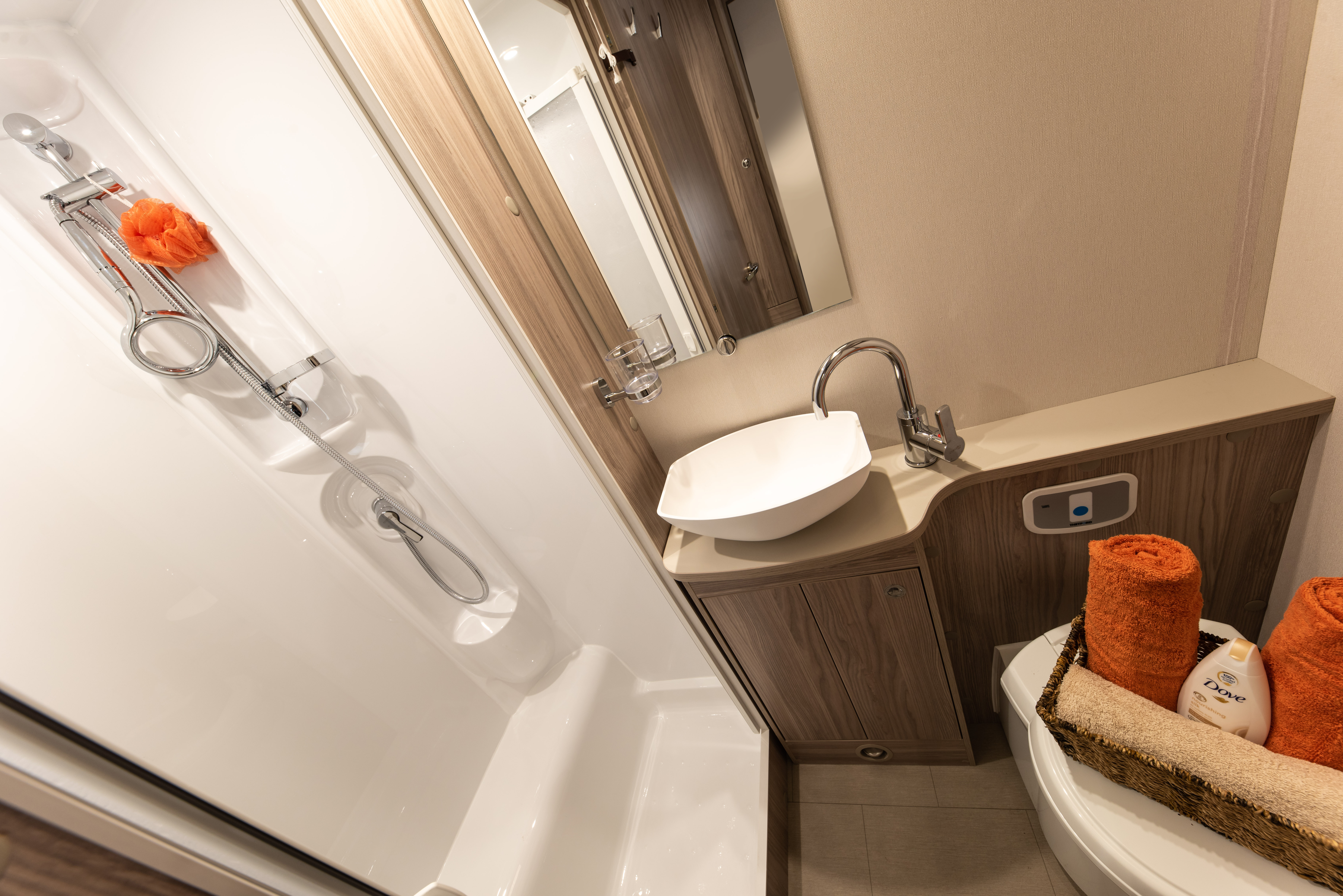 The shower room is quite adequate in size, with a square step-in shower, a central washbasin, and the toilet at the rear. Cabinets are under the basin and on the wall above the toilet. Two towel hooks are on the door. We think more would be needed, but these are easy additions to fix. 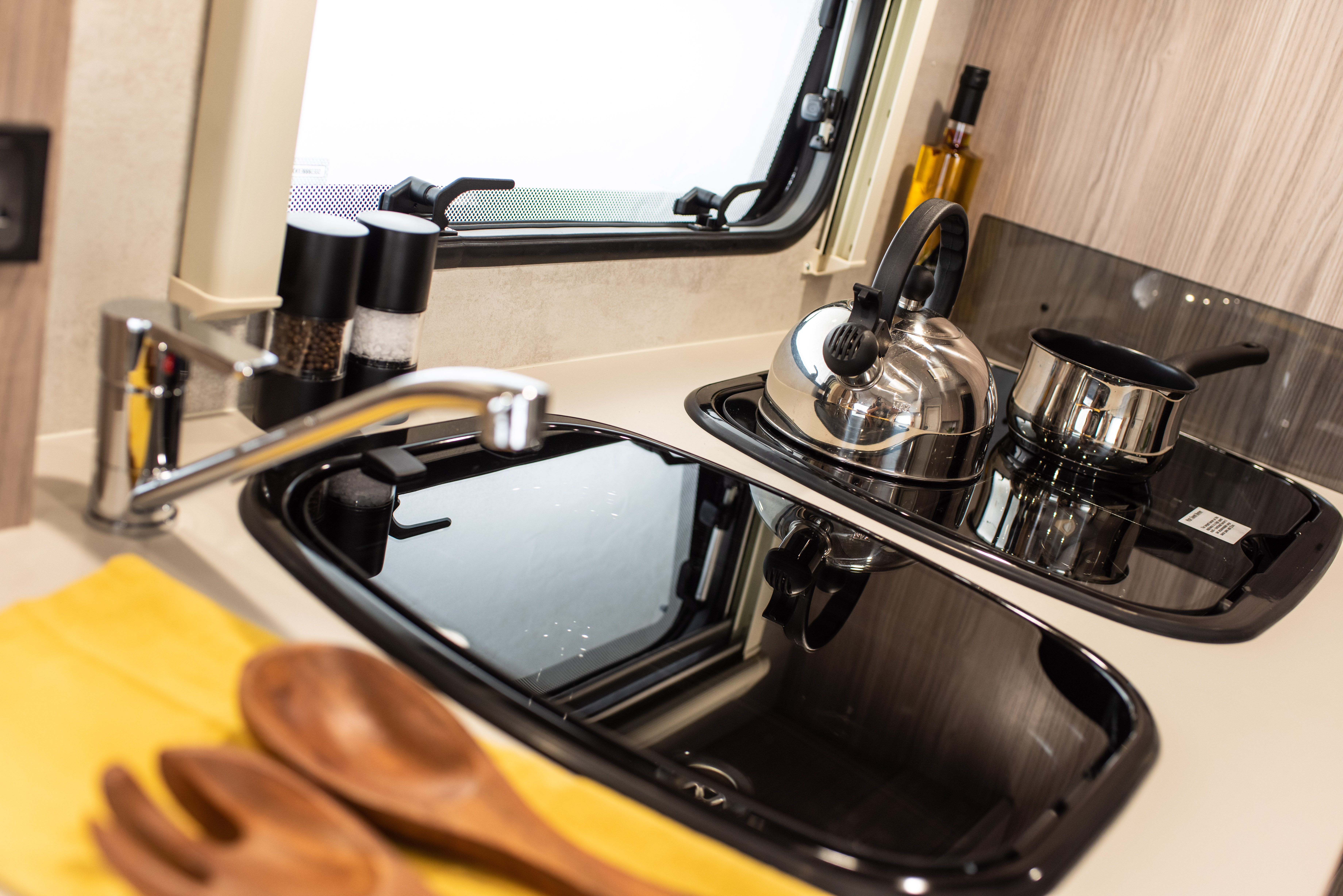 The fridge is the Dometic tall, slimline model with a 133-litre capacity. It has cabinets both above and beneath. The dresser, between the fridge and the door, provides a deep, two-shelf, double-doored cabinet. And, under the dresser surface that’s the ideal place for your television, there is a drawer and a two-shelf cabinet.

This caravan packs in a phenomenal amount of storage in the kitchen, with three drawers plus a drop-down cabinet on the fore end of the kitchen, a large, central cabinet with two shelf spaces, and a generous cabinet under the combined oven/grill.

Surface space surrounds both the sink and three-burner hob, and there’s an extension to hinge up when you need more space.

Above the kitchen are two spacious lockers, both with concealed positive catches.

Spotlights are set into the ceiling in the lounge and kitchen area, and two directional spotlights are under the lockers. The Xplore 585 has an eight-litre Whale water heater and a 4kW Whale heating unit designed to deliver powerful heating and it has a quiet night-time setting. 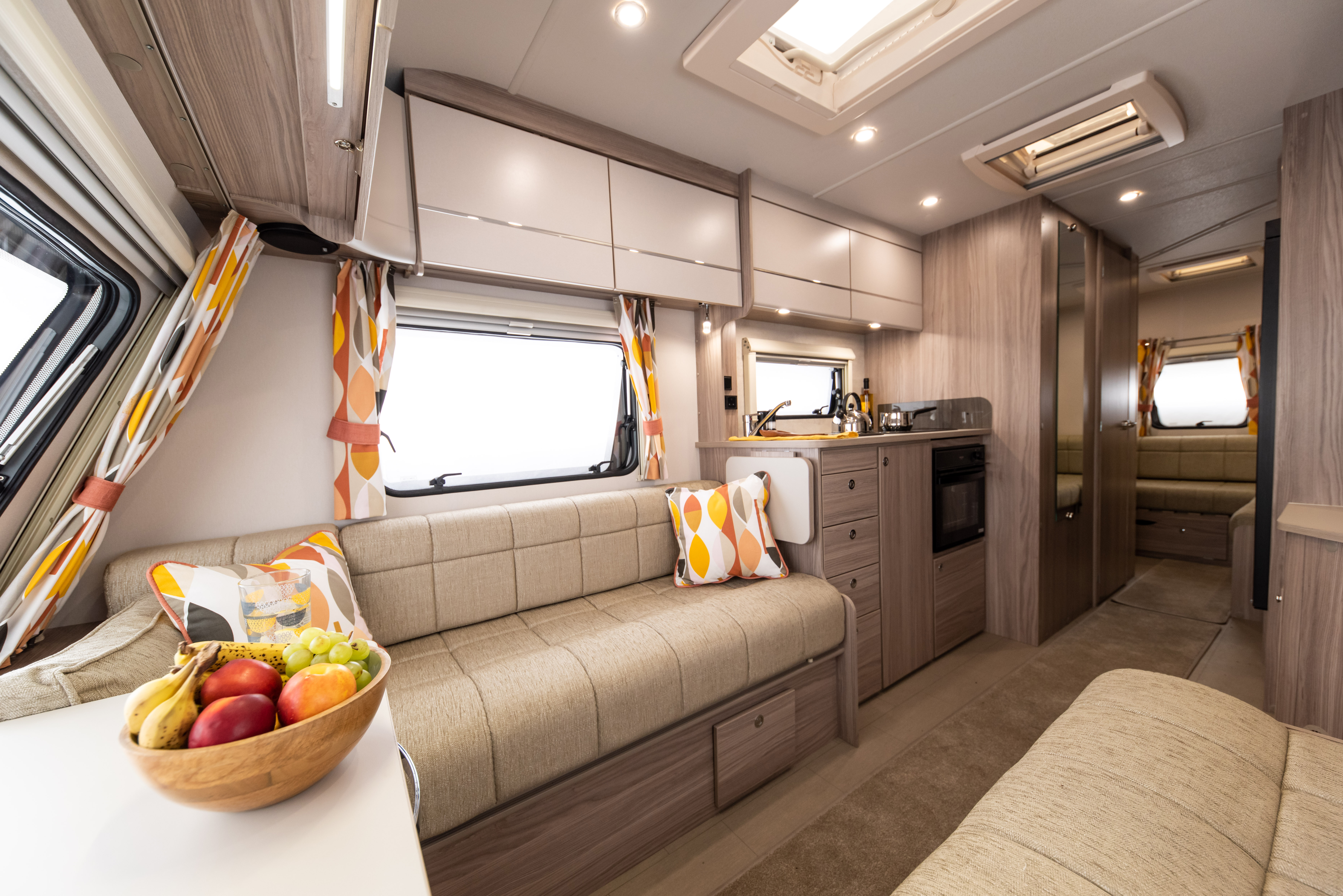 "This newcomer is a well-priced package of family caravanning excellence. If you’ve never had a caravan before and you go for an Xplore 585, you can be sure you are buying a carefully crafted layout that is superbly designed with family needs in mind, and with bright, modern styling that will make you the envy of your campsite neighbours."

Find out more about this brand new layout and Get your Quote today: https://elddis.co.uk/models/xplore-585 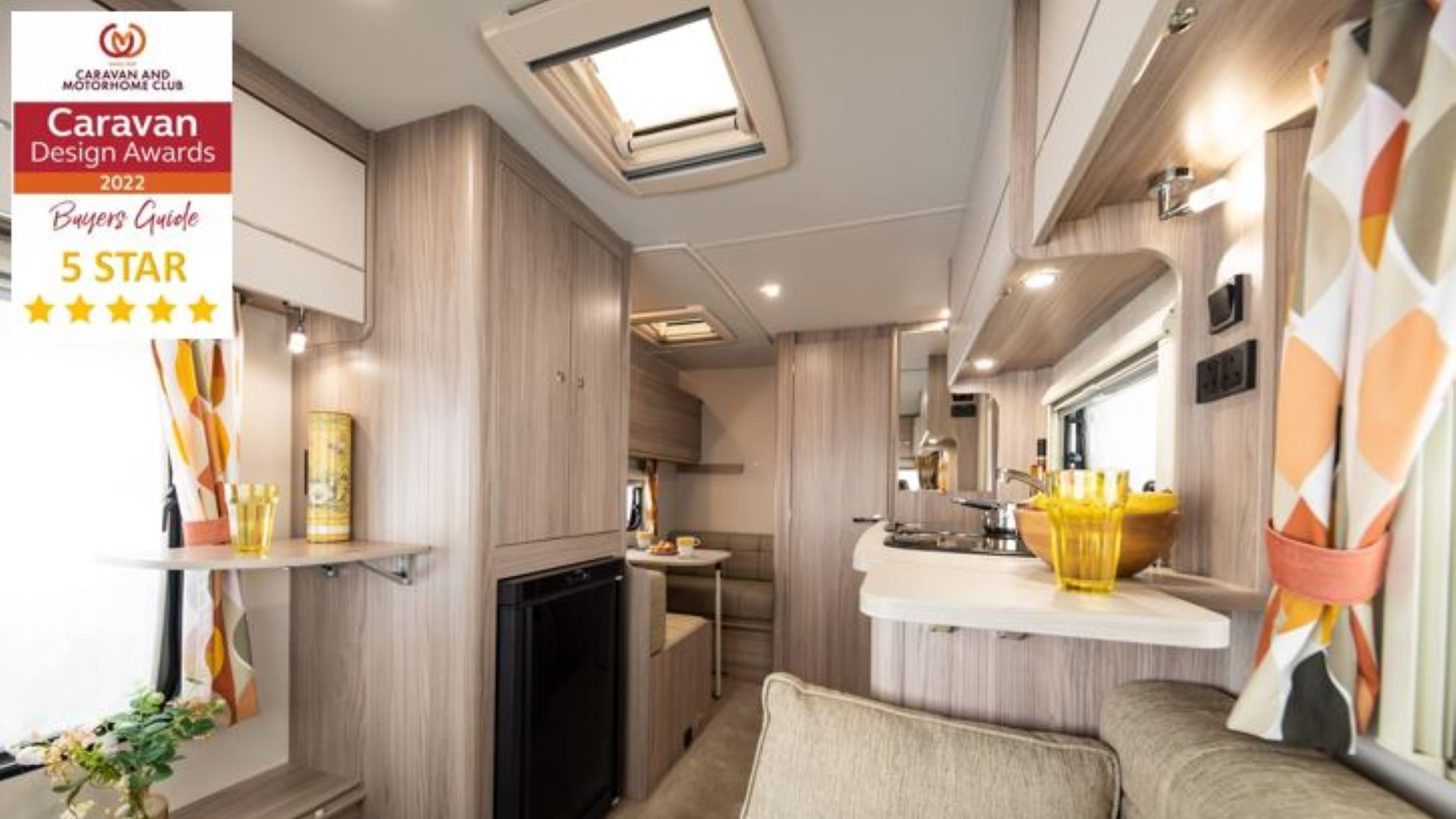 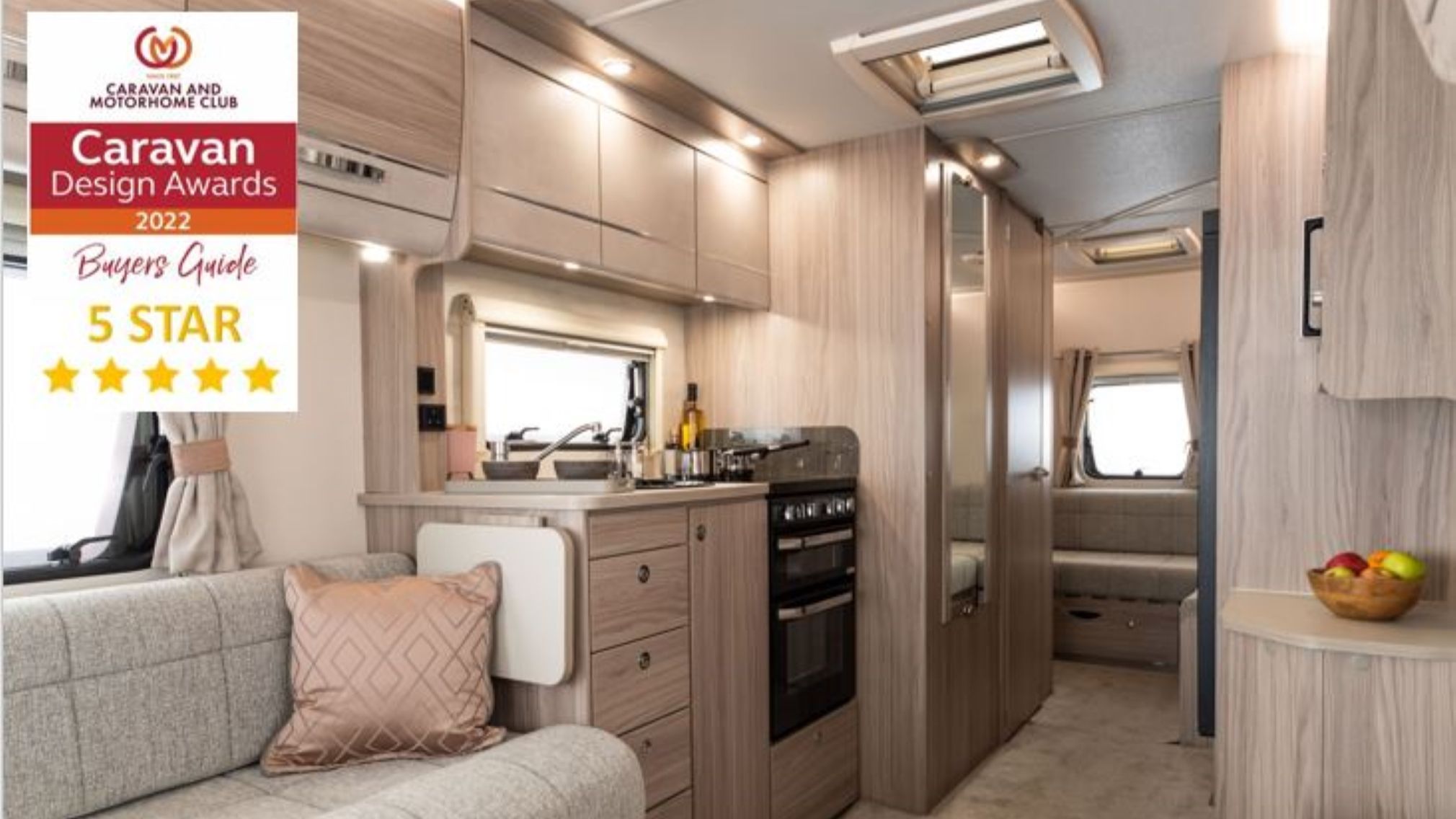 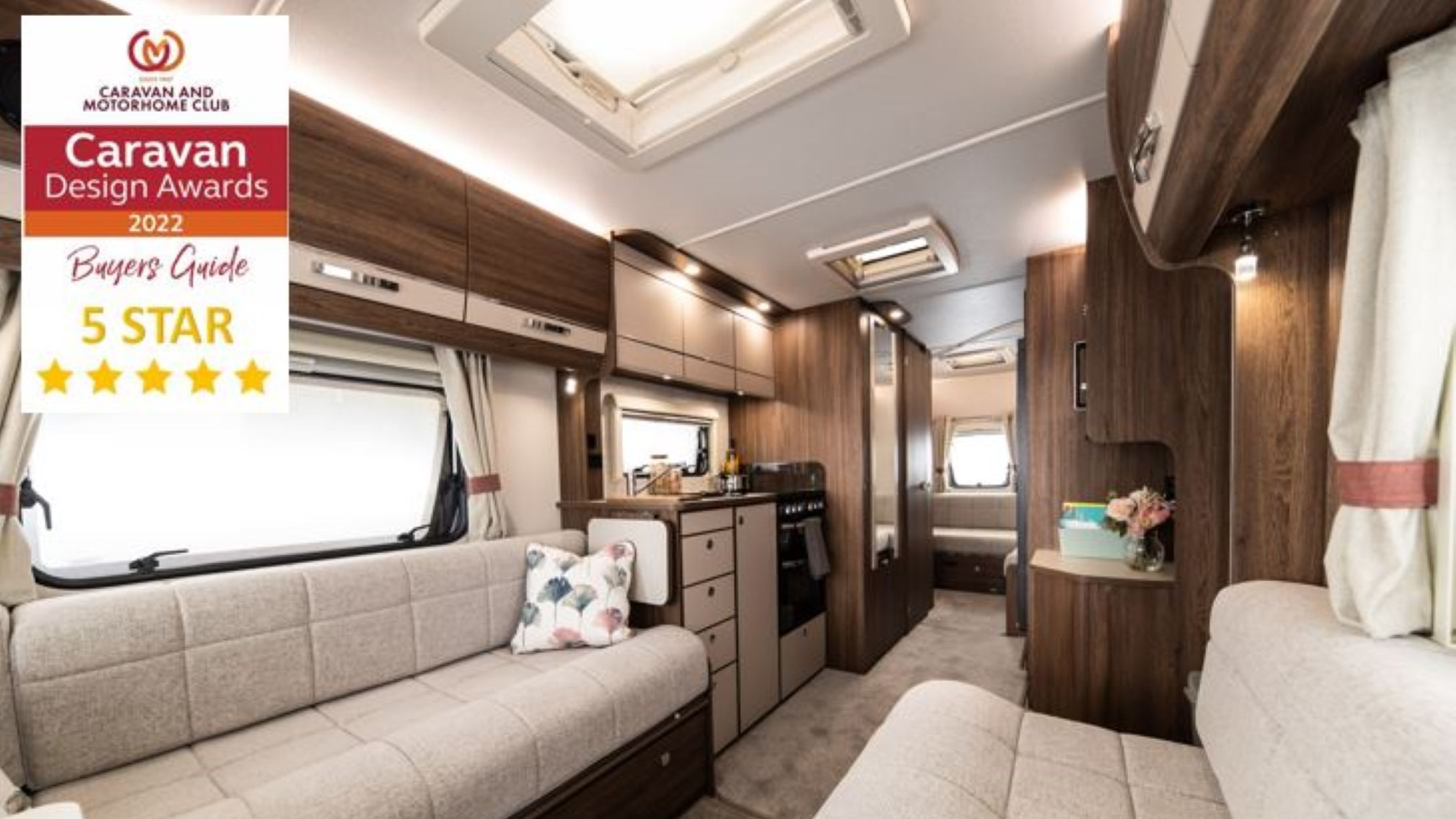