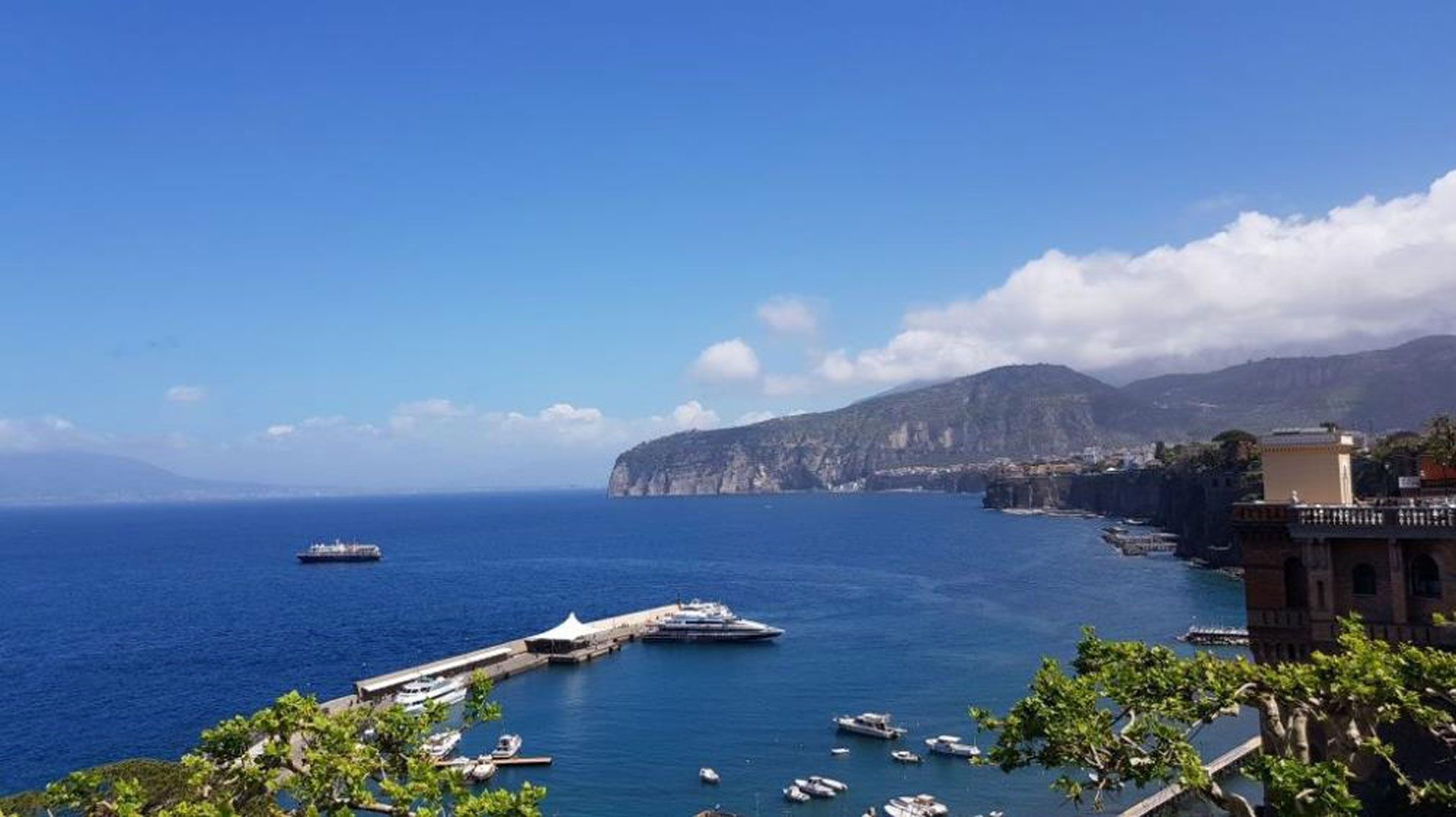 Oh, Bella Napoli. You’re the best example of beautiful chaos in Europe and a magnet for synchronicities!

I say Europe because when I travelled through New Delhi someone there described it as the Naples of India. Except that these two cities couldn’t be more different.

Naples’s beautiful chaos is part of its culture, but it isn’t like this in all parts of this vast, colourful city.

There’s a wonderful song about Naples by the late and well-loved song writer, Pino Daniele, called “Napule E'”.  He sings his heart to his beloved Naples and says: “Napule e’ mille culure!”: Naples is a thousand colours.  He also mentions fears and difficulties that the city endures.

I am not from Naples, yet every time I listen to it I feel the love for the city too, and it gives me the shivers. Even if you don’t understand the lyrics (and I don’t get it all either, because it is in local dialect), play it here then close your eyes: https://www.youtube.com/watch?v=81pIF0VSfMo.

I expected Naples to be a little intimidating and somewhat frustrating for its chaos and traffic, and it is but I quickly grew fond of it.

I camped in Ercolano, just outside of Naples, at the foot of Mount Vesuvius. The directions to town centre were pretty straight-forward, but somehow the 30m journey turned into 1h30m.  But it was fun.

I love exploring new places on local transport systems. First destination: lungomare, the coastal area of the city.  To get there, I first took a train that was almost entirely graffitied (and very delayed).  I then switched to the metro Line 1, a perfect contrast with a brand-new, modern look.  Later in the day I also caught the funicular, then more trains (the wrong ones..).

I enjoyed roaming around, walking mindfully for hours.  First along the quieter seafront then through the busier streets to reach the characteristic Quartieri Spagnoli.

I was happily lost forever in the maze of narrow streets, adorned by hanging laundry and over-looked by infinite little iron balconies.  A unique experience. When I found my way back out of the Quartieri Spagnoli, I realised I was close to a Pasticceria that my lovely cousin Marina recommended (we missed each other in Naples by only 2 days!). The bakery is called Pasticceria Poppella (http://www.pasticceriapoppella.com/). I treated myself to a typical Fiocco di Neve (Snow Flake), I never had before. It’s a super soft donut filled with a delicious light cream inside. So simple yet so devine.

In my full sugar-rush state, I accidentally wound up at the lavish “Galleria Umberto I”, with its intricate details and majestic glass cupola. For a moment I thought I fast-travelled to Milano. This impressive, stylish shopping mall is very similar to the Galleria Vittorio Emanuele.

NAPLES A MAGNET FOR SYNCHRONICITIES

By wonderful chance, a very dear girlfriend was visiting Naples too that day.  Doretta is also an Italian Londoner and she was on a holiday tour with her family, that included Naples and the Amalfi Coast.  We failed to meet in the city but agreed to catch up the next day in gorgeous Sorrento.

As I continued wandering around solo, I felt the need for a break from the crowds and I stumbled on a funicolare station.  Mmmh… heading up the hill may offer some harmony and panoramic views of Naples. I had no idea where I would end up exactly but I followed intuition spontaneously.

When I reached the top, I walked out and thoughtlessly turned the corner towards Piazza Fuga, against the people flow. That’s when a radiant girl sitting at a road side table caught my eye.  No way!?

I walked up to the table and YES it was my friend Fabi. What were the chances?

I met this amazing human being while volunteering in Nepal in November 2017. We were part of a cool crew organised by The Acts of Kindness Collective. We are now all friends for life and the crazy fact is that just a few hours earlier, we were all messaging on our WhatsApp group, discussing a reunion this year.

“What are you doing here?”, I asked her. She jumps with a mix of surprise and joy, then replies: “I AM from here, what are YOU doing at this neck of the hood?”.

What an incredible flow of synchronicities.  Fabi lives in Milan and we met there for dinner when I drove through in January. I’d forgotten she was Napoletana. What a joy.

I joined her and her two friends for lunch and coffee, before following her tip to walk to Certosa di San Martino for WOW views of the city and Mount Vesuvius, then proceed on foot all the way back down to Montesanto. That’s when my phone died.

No phone battery = no map…

Finding my way back to the van was tricky.  I was doing well, occasionally using the good old method of asking for directions. But I still managed to get on the wrong train to Ercolano.  I arrived at a place called Torre Greco, that unbeknownst to me has 2 stations with the same name but quite far from one another.

As soon as I realised I was really lost, I walked into a local bar for help but they never heard of my camper stop. I was still too far.  At least 6 people got involved before a nice guy who was having a coffee offered me a scooter ride to the right station.  The ladies of the bar reassured me he could be trusted.

As we zig-zaged the roads the napoletano way, he warns me to be more careful because not everyone was as nice as him in the area. I figured I was exposing myself to some risks, but what else could I do if not trust in human kindness at that point?

At the station,  I exchanged a few words with two ladies on the platform near me. When I explained that I got lost, they too warned me to watch out. They wished me good luck with a look of sympathy, then as I got off the train they once again reminded me to stay vigilant.

My goodness. It must be hard to live in constant state of alert.  I wonder if this was fairly justified or if the fear is so deeply ingrained in the local culture. Unfortunately, criminality is still present in Naples but was it really that different to other big cities?

Interestingly, if I were none the wiser about Naples and the many warnings, my own experience was very positive and I met only really nice, helpful angels here.

SORRENTO, THE AMALFI COAST AND CAPRI

After Naples beautiful and adventurous chaos and synchronicities, I spent a few days in and around the Amalfi Coast.  I had never been here before and oh my, it is exactly as you expect it: stunning!

I met my friend and her family crew the next day and we hopped on a boat tour from Sorrento and stopped for a few hours in each of Positano and Amalfi, before finishing off the perfect day with a delicious and fun dinner in Sorrento old town.

Peter Van was parked at their lush hotel for the day, up the hills of Sorrento and when we got back late that evening, they let me stay there for the night, so I joined my friends again in the morning, for breakfast with unforgettable sea views.

They all left for their next destination that day, and I stayed a little longer. I based myself in a lovely camping site with a swimming pool, a little beach and perfect pitches overlooking the sea and Mount Vesuvius.

Sorrento is perfect for a gentle stroll a visit in their beautiful church with the prettiest tiled flooring, and delicious lunches on terraces overlooking the port.

I couldn’t leave this area without first treating myself to at least one day out exploring nearby Capri.  Another travel gem. I must return to this place and stay for at least a week to savour it all properly.